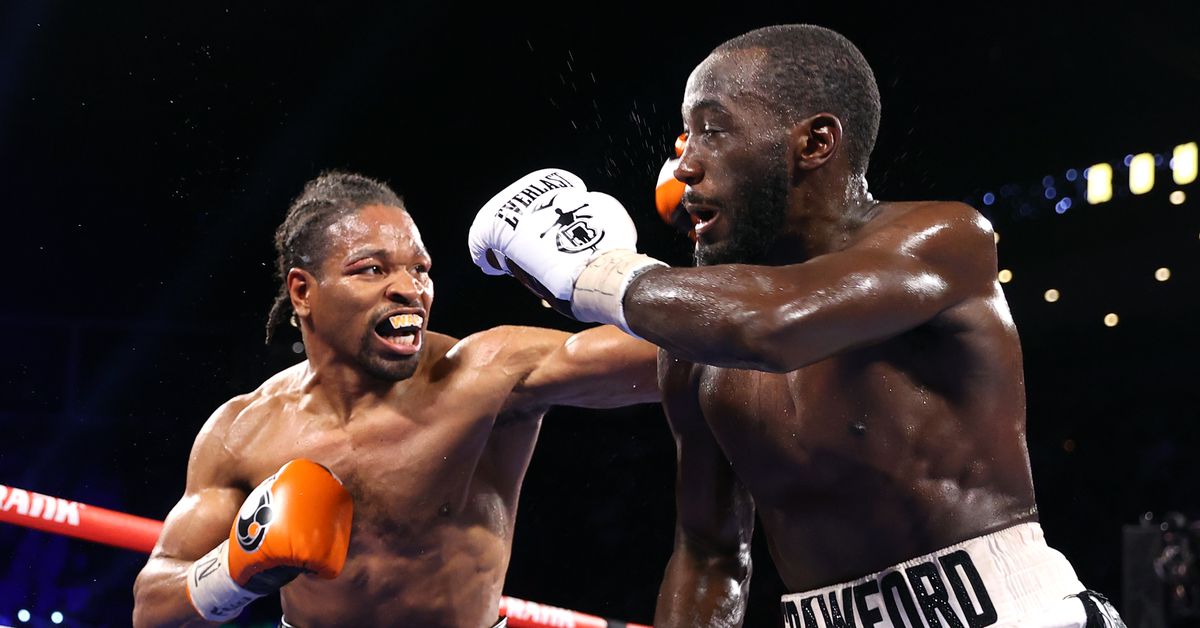 It’s not every weekend that boxing can claim to have a more compelling night of fights than mixed martial arts but in our book the Terence Crawford vs. Shawn Porter fight easily beat out Miesha Tate vs. Ketlen Vieira at UFC Vegas 43 for most compelling fight of the weekend.

Crawford defended his WBO welterweight title in a tight and entertaining bout that ended in the 10th round after he knocked down Porter twice. Porter’s father, sensing a dangerous finish coming, waved off the fight.

And then shortly after the bout was over, Shawn Porter retired from boxing.

“I kinda expected that question because [I have fought] everyone,” Porter said during the post-fight press conference. “I am, I am prepared to retire. I was prepared to announce my retirement tonight, win lose or draw. Even if it was a draw, we had a date, they were telling us we’d have to do it again, I was not going to do it again. I’m announcing my retirement right now.”

“One of the guys I admire in this sport is Andre Ward, and I heard he had me up on the scorecards so shout out to Andre Ward,” Shawn continued. “I kinda hang on to every word that ‘Dre says, I really admire him and everything he’s been to this sport. And we were in the back room about to do Tyson Fury vs. Deontay Wilder 3 [commentary] and someone comes up to him with talk about Canelo saying ‘Come on champ, you know you got one left in you.’”

“[Andre] said ‘Why can’t I just have one more left in me?’ And the guy was confused. Meanwhile I’m like ‘He said it all right there.’ Why do I have to continue? Why can’t I just have one more in me? I think a lot of time the way this sport has gone, you expect us to fight for 15, 20 years, you say ‘We hope he leaves this game with his health,’ but you never really know. I’ve been fortunate enough to be in some really big fights with some really great guys and still have my health at the end of the night.”

“With that being said, I knew that Errol Spence Jr. was going to be my last fight, I knew that in 2017, I think it was, when he won his championship fight. And I said he’d be the last I fought. And after we fought, I felt like there was something else, and that something else was Terence Crawford. Win, lose, or draw, it doesn’t matter.”

“I gave this sport a great deal,” he said. “From the training to the competition to the more training. And with that being said, after fighting everybody at the top, what more do you do? I’m not going to be a gatekeeper. You look at the four losses and assume ‘He could be a gatekeeper.’ That’s not the life I wanna live. I’ve never wanted to live the life of a fighter who fought into his forties … We wanted to end this when we were 30. And I’m 34, and now’s the time.”

As for the decision from his father and coach Kenny Porter to wave the fight off, Shawn sounded at peace with it.

“I understand my dad’s position and he saw … I took to many shots there clean and it’s not the Porter way we do,” he said. “It was bad defense, hands were down, and I think part of me is just wanted to get back and was careless. And the other part of me was a little out of it and not able to defend myself quick enough. So again, I understand what my dad’s position was there. I didn’t expect it, though. But when I saw it I was like … ‘Okay.’”

Opinions are divided on whether it was the right call, especially with the fight being as close as it was. In the end judges had Crawford slightly ahead by scores of 86-85, 86-85 and 87-84. It would have been tough for Porter to come back from a 10-7 in round 10.

“I wasn’t quite sure, actually [how close it was],” Shawn admitted. “And this is one of the first fights where my dad didn’t really have any of that ‘You’re up, you’re down’ conversations. It was, we were going round by round. My dad did an excellent job in the corner. Gave me some really good instruction and adjustments to make as well. I think my execution was there but my consistency wasn’t there. But through the 10 rounds that we had gone I wasn’t really sure where the score was.”

“There were some rounds that I thought were definitely mine and some rounds where I get a little bit more than usual, so automatically I felt like they weren’t my rounds. I wasn’t sure what the score was and my dad didn’t really give me a score. He was more so focused on ‘Lets take this round by round and let’s be focused and beat this man.’ And we didn’t get it tonight.”

Porter hangs ‘em up at 34 years of age with a 31-4-1 record including 17 KOs and two welterweight title reigns.