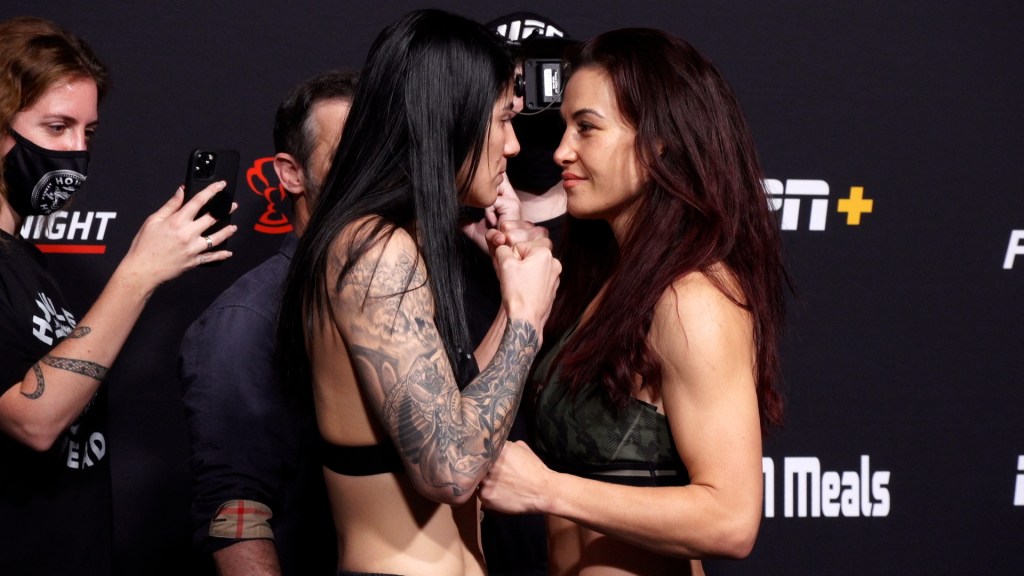 Vieira (12-2 MMA, 6-2 UFC) handed former UFC champ Tate (19-8 MMA, 6-5 UFC) her first loss since coming out of retirement when she produced a unanimous decision victory in the women’s bantamweight headliner, which took place at the UFC Apex in Las Vegas.

Check below for the top Twitter reactions to Vieira’s triumph over Tate at UFC Fight Night 198.

3 handshakes for the main event tonight! Happy to see I’m not the only one who likes handshakes! Haha #UFCVegas43

That’s a really, really close round.

I think Vieira’s early work might just have been enough, but Tate came back well. #UFCVegas43

Vieira corner with a good question: “Why did you try to shoot for a takedown? This was not a good idea” #UFCVegas43

Love listening to @dc_mma octagon side. I get to talk to him so much now that I forget how dang smart he is. Always giving you the next step of the process when it comes to mixed martial arts. Makes me smarter every fight night. @ufc Main event.

Tate feenin to get knocked out here. She’s lucky Vieira isn’t much of a kicker

Commentary very biased for Tate. Vieira in control the feet and keeping it there. #UFCVegas43

Very close third. Don’t think Ketlen landed as many impactful shots at in 1 & 2.

Shiii I might have this 3-0 Tate going into the 4th . Vieira is landing the harder shots YES. There is no grappling and Miesha is far more active and controlling the octagon ! Regardless Tate 2-1 🤷🏾‍♂️

Vieira’s takedown defense was at 92% prior to this fight. Tate putting that to the test right now.

Nothing has been decisive in this fight so far but I have Tate up 3-1. #UFCVegas43

Close fight, but I have to score it round by round and in the close rounds, I leaned slightly towards Vieira due to landing the more immediately damaging strikes.

Great fight. Highly competitive the fight but I feel Vieira won that fight, no question! #UFCVegas43

Vieira 3-2 . This might be split . Miesha made this fight interesting . Vieira has a prototype build ! #UFCVegas43

Miesha is a warrior! It was a close fight but just amazed by what Miesha has done to improve and stay hungry. Better striking but lacked some footwork. Huge win for Viera who showed a lot patience and improvements as well. Both will be better from this 5 rounder.