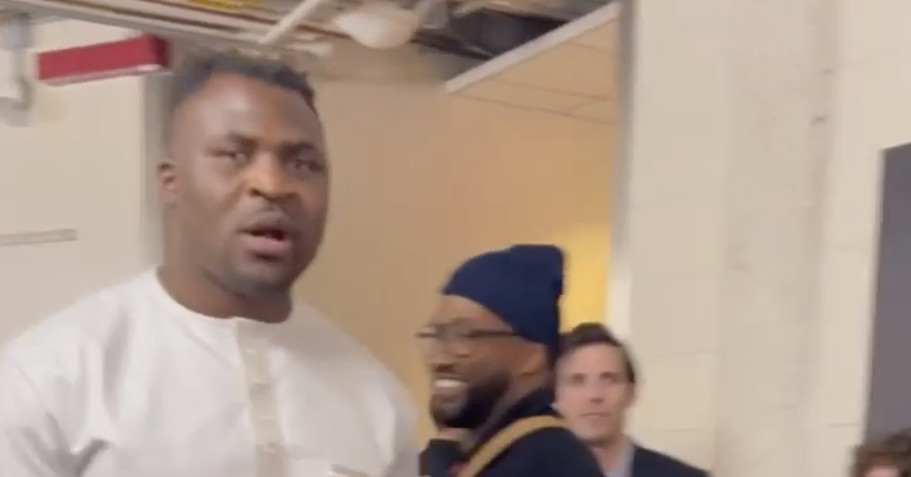 As UFC 270 approaches, one viral clip in particular is guaranteed to be a major part of the marketing blitz for Francis Ngannou’s title unification bout against Ciryl Gane.

The video of Ngannou snubbing his former teammate Gane and MMA Factory coach Fernand Lopez backstage at UFC 268 drew plenty of eyeballs in November after the UFC captured the icy backstage interaction and quickly posted it to social media.

It was the type of fortuitous footage that could be ratings gold for a fight the UFC is likely to market as a bad blood bout between two of the most fearsome athletes on the planet — an easily digestible clip that tells an instant story and was framed so perfectly that it almost felt as if it was lifted out of a scene in a Hollywood movie. But was it too perfect?

In retrospect, the reigning UFC heavyweight champion can’t help but wonder whether the promotional machinations were behind everything from the start.

“That’s exactly what the UFC was waiting for. When you look at that video, they were waiting for me around the corner,” Ngannou said on Daniel Cormier’s YouTube channel. “It’s not like they wanted the story, the bad blood — they created that [scene]. … What happened is there was this lady taking us to our seat, [my manager] Marquel [Martin] and I, and she was bringing us to this section — and then they talked to her over the radio. Then she was like, ‘Oh, sorry, I’m wrong,’ so she turned around and we get back [and they were there].

“Tell me how this gets to be a coincidence,” Ngannou continued, laughing along with Cormier. “That’s what happened. I’m telling you what happened. … And when you look, by the time I come from [around] the corner, the guy was ready with camera. If you watch that video, he was on me by the time I turned around the corner and just zoomed in on me, like, ‘Oh, he’s there, he’s coming.’ Like this movie scene. He was there waiting for [me].

“It’s not like you see somebody and you’re like, ‘Oh damn, let me film this moment.’ No, come on. His camera wasn’t just there waiting to film something if ever something happened. No, he was waiting like he knew who’s coming. He knew that I was coming.”

Though the scene may have lent credence to the narrative that bad blood exists between Ngannou and Gane, it actually isn’t exactly true. Both fighters have noted multiple times in the lead-up to UFC 270 that no real rivalry exists between them, and any relationship they once had while training at France’s MMA Factory was an infrequent but cordial one.

The only actual lingering beef surrounding UFC 270 is the one between Ngannou and Lopez, who had a messy split prior to Ngannou’s title win.

Ngannou told Cormier that he would’ve been happy to shake Gane’s hand or the hand of his former teammate Nassourdine Imavov, however because of the rocky nature of his relationship with Lopez, Ngannou didn’t want to approach the group lest anything get misconstrued.

So when faced with an awkward split-second decision, the UFC champ ultimately just decided to keep it moving.

“Obviously, as his coach said, he’s naive, he’s naive,” Ngannou said of Gane. “I would’ve been confused too, because if I walked by Gane [alone], I would say hi. If it’s just him, I would say, ‘Hi, what’s up?’

“I didn’t even see Nassourdine, who fought that night. And I don’t have any problem with Nassourdine, I don’t have any problem with Ciryl. But I know the guy next to him and it’s going to be awkward. And if I say hi to them without saying hi to Fernand, and they respond, I think that might cause them a problem as well. So this was a very confusing situation — like, OK, what can you do here to get out of here?”