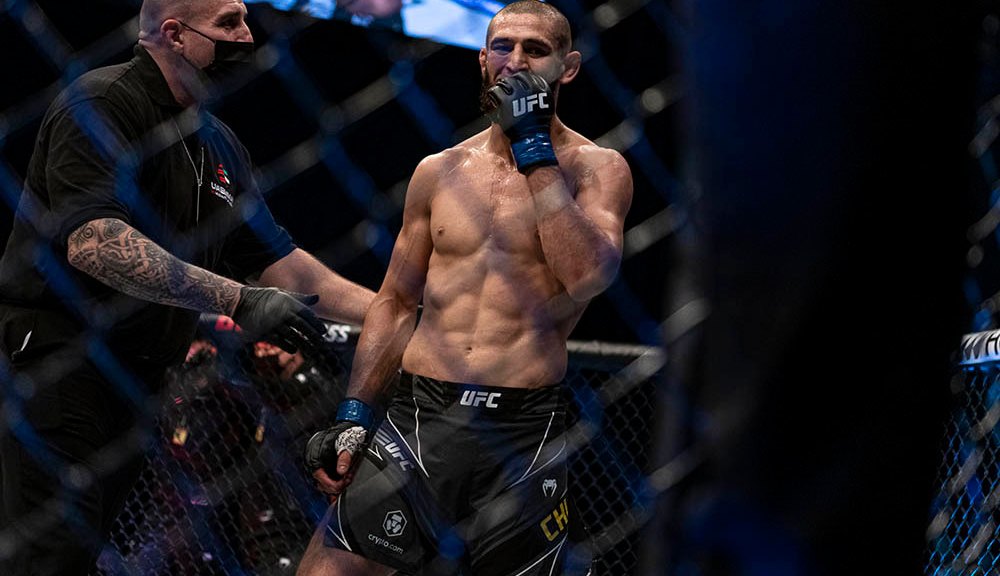 Khamzat Chimaev seems to have everyone on his wish list.

But when it comes to his division, the unbeaten star has zeroed into the top welterweight contenders. In a recent sit-down interview with “Hustle MMA,” Chimaev was asked who he’d like to face the most out of Leon Edwards, Gilbert Burns, Nate Diaz and Jorge Masvidal and he was quick to answer.

“With Edwards, of course,” Chimaev said.

Chimaev has a long history with Edwards (19-3 MMA, 11-2 UFC), who has diverted his attention to welterweight champion Kamaru Usman after his UFC 269 fight with Masvidal fell through. Chimaev threw his name in the hat as a replacement, but the fight was removed from the card.

Not only did Chimaev and Edwards see multiple bookings scrapped due to COVID-related health issues, but according to Chimaev, Edwards refused to spar him years ago prior to “Borz” signing with the UFC.

“He was in our gym. I wanted to spar with him, but he ran away,” Chimaev said. “When I wasn’t in the UFC, I offered to spar. He wouldn’t even spar with me. He said, ‘In the future, maybe – we’ll see.’ When the fight was scheduled for the first time, he had COVID, and then I had my own problems.

“Now we are back. I challenged him and he said that he wants to fight Usman, and Usman isn’t going to fight for six, seven months. So is Edwards just going to sit around? I don’t think so. I don’t know. He’s a weird dude, too. If you want to earn money and be the best, you have to fight everyone. I won’t wait a year to fight for the belt. A year will pass and then he gets injured. Another year will pass. What for? Seize the moment while you are young – you can fight, make money. Do your job. Be the best in what you do.”