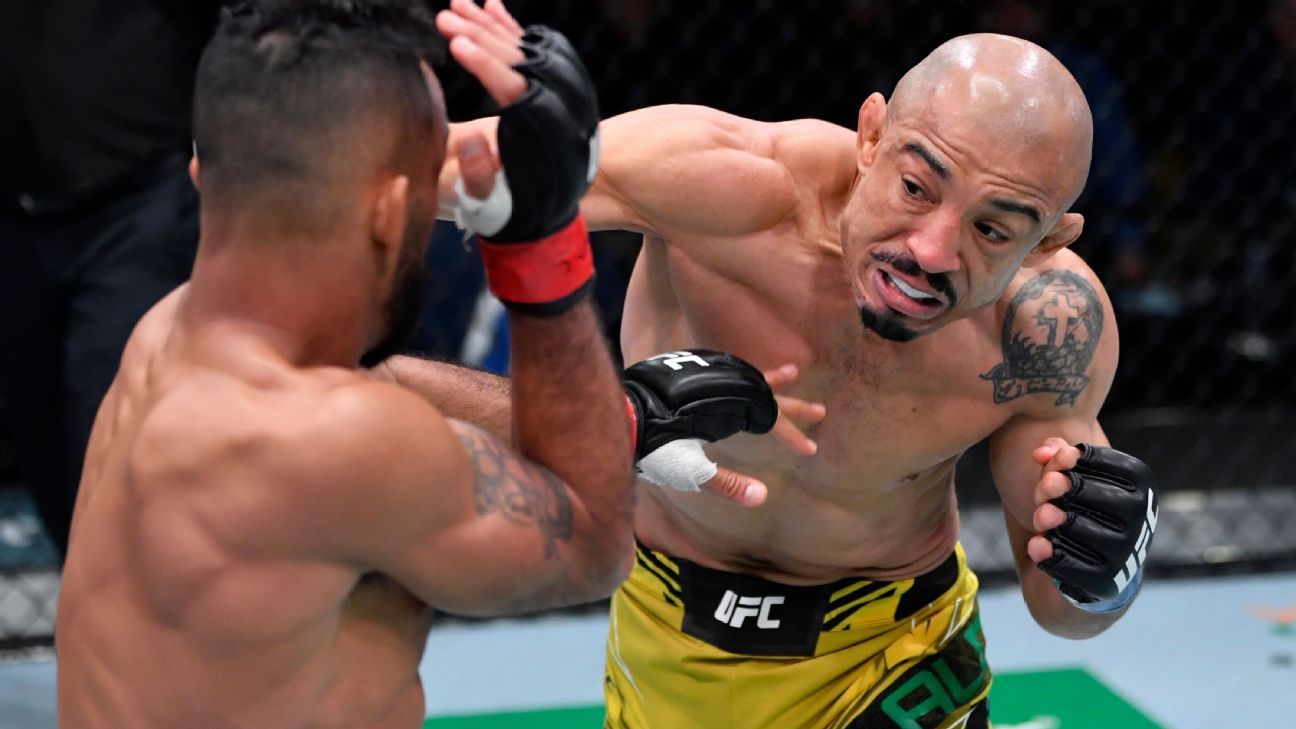 Jose Aldo has already done more than all but a few fighters in the history of mixed martial arts. He’s arguably the greatest featherweight of all time, and his resume is good enough to be on the short list of the very best MMA fighters ever.

Yet, four years after dropping the featherweight belt for the final time, Aldo is still pushing ahead, winning fights and making a move toward a title in a new division.

In a complete performance, Aldo defeated the up-and-coming Rob Font via unanimous decision (50-45, 50-45, 49-46) in the main event of UFC Fight Night on Saturday in Las Vegas. Aldo rocked Font several times with right hands, hurt his legs with hard kicks and damaged him with hooks to the body. He looked like the Aldo of old while also mixing in some new wrinkles as a bantamweight, such as superior grappling.

“I want to be a champion in this division and I’m working toward that,” Aldo said through an interpreter in his postfight interview. “Nobody is gonna stop me.”

Coming in, ESPN had Font ranked No. 5 and Aldo ranked No. 6 in the world at 135 pounds. Aldo said afterward he’d like a title shot next, but the situation is a bit messy. UFC bantamweight champion Aljamain Sterling has been out since March following neck surgery, and he is likely to face Petr Yan, the former champ and current interim titleholder, to unify the titles. Yan lost the title to Sterling when he was disqualified for an illegal knee at UFC 259 on March 6.

In lieu of a chance at the title, Aldo had another proposition: former bantamweight champion TJ Dillashaw, who beat Cory Sandhagen over the summer in his return from a two-year doping suspension. Dillashaw is currently recovering from knee surgery.

“Dillashaw is right there,” Aldo said. “Let me fight Dillashaw.”

The fight Saturday was a story of volume versus power. Font had a lot of success with his boxing, especially early on and with his jab. But Aldo was mostly unfazed by the blows. Meanwhile, Aldo rocked or dropped Font in every round except for the third. Font had moments, but never hurt Aldo the way Aldo hurt him.

Aldo nearly finished Font in the fourth and fifth rounds. The fifth was the closest. Font knew he was down on the cards and was coming forward looking for a stoppage victory. But Aldo lit him up with a right cross and dropped him. Aldo followed with shots on the ground, took Font’s back and nearly had a choke locked in. Font, though, survived until the bell.

Aldo’s two takedowns were the first ones of his five-fight bantamweight run in the UFC, according to ESPN Stats & Information.

“I’m gonna be standing up, I’m gonna be going to the ground,” Aldo said. “I want to be all-around. This is the new Aldo you see.”

Aldo (31-7) held the UFC/WEC featherweight title for parts of six years (from 2009 to 2015), including seven title defenses, a record in that division. The Brazil native moved down to bantamweight in 2019. He lost his first two there, including a vacant title bout against Yan. But Aldo, 35, has won three straight and looked very good in wins against contenders Pedro Munhoz and Marlon “Chito” Vera before Saturday.

Font (19-5) had a four-fight winning streak snapped. Most recently before Saturday, he took home a unanimous-decision win over former bantamweight champion Cody Garbrandt. The Massachusetts native had not lost since 2018. Font, 34, sports a 9-4 UFC record and looked better than ever since returning from knee surgery last year.

“The guy is a legend,” Font said of Aldo. “He’s tough, man. I feel like I can beat him, but it just wasn’t my night. Hats off to him. … I just went five rounds with one of the legends of the sport. I’m gonna get better off this, for sure.”