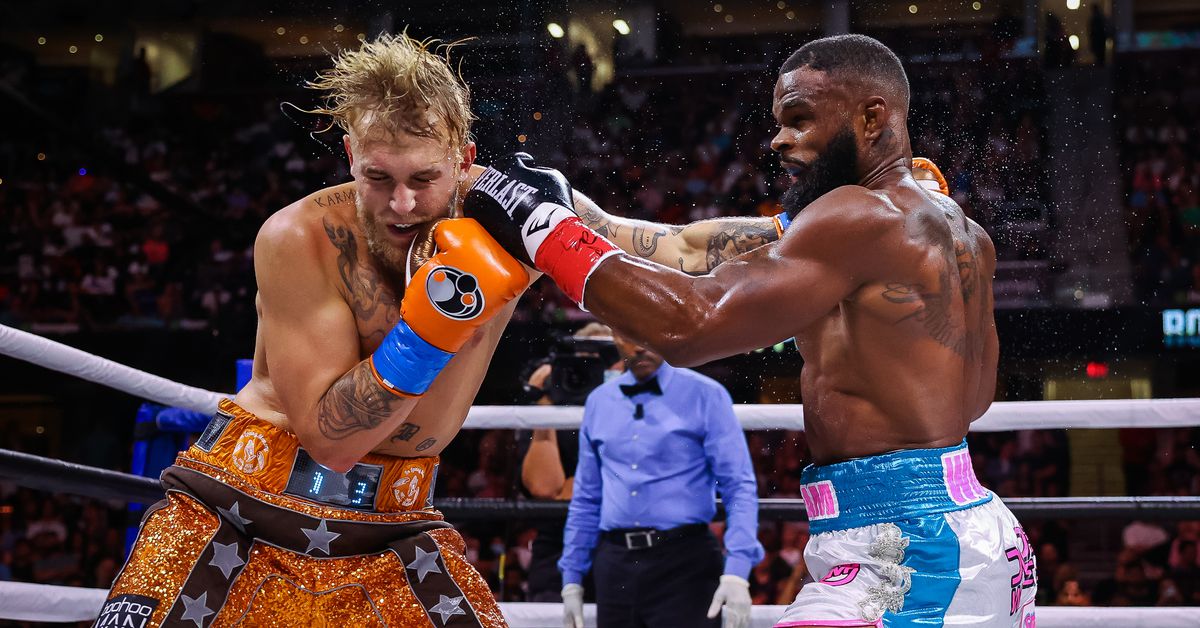 With Tommy Fury out, Jake Paul now finds himself in an unexpected rematch with Tyron Woodley.

MMA Fighting’s Damon Martin confirmed with sources with knowledge of the new fight that Paul (4-0, 3 KOs) and Woodley (19-7-1 MMA) are set to meet in a boxing bout in the new headliner of the Dec. 18 Showtime event that takes place at Amalie Arena in Tampa, Fla.

Woodley replaces Fury, who withdrew due to a rib injury and a chest infection according to a statement from Fury’s team released to Ariel Helwani.

Paul released a video announcing the change, insulting Fury and claiming that he is offering Woodley a $500,000 if Woodley can knock him out in their rematch.

Tommy Fury has pulled out of the fight due to a “medical condition” and Tyron Woodley is stepping in for December 18th for the official rematch. pic.twitter.com/t1OFVQQBBt

“It is official, Tommy Fury is boxing’s biggest b*tch,” Paul said. “He has pulled out of the fight. The Furys have pulled out of the fight due to a ‘medical condition,’ who knows what’s going on in that camp? I think he has a bad case of ‘p*ss-itis.’ I couldn’t believe the news at first. This still doesn’t even seem real. He fumbled the biggest bag of his life. Now he will be watching at home, paying me $60 instead of getting paid millions of dollars to fight me. I fought with a broken nose, I fought sick, get the f*ck over it. This is boxing. It’s official, he was scared, I think the pressure got to him, the sh*t talk got to him. That’s the bad news, guys.

“The good news is that Mr. Tyron Woodley, we called him up and we were like, ‘Hey, you want to take the fight?’ He has been training. He goes, ‘Sure, I’ll take the fight, let’s do the rematch, run it back.’ I’m giving him $500,000 extra if he can knock me out. Jake Paul vs. Tyron Woodley 2. Leave no doubt. I didn’t knock him out the first time, I’m coming back and I’m getting that crazy W, the crazy highlight-reel knockout. Dec. 18, the show must go on, I’ll see you guys there.”

The news was first reported by Mirror Online.

This will be the second meeting between Paul and Woodley this year. The two fought in August at a Showtime event in Cleveland, with Paul winning an eight-round split decision. Woodley immediately called for a rematch, which Paul claimed would be granted if the former UFC welterweight champion followed up on a pre-fight bet they had arranged where the loser was to have the winner’s name tattooed somewhere on their body.

Woodley later showed that he had an “I love Jake Paul” tattoo done on his middle finger, though some questioned whether the tattoo was real and Paul seemed to indicate that he was moving on from the rematch regardless. Paul would go on to book a fight with Fury, a reality star and the half-brother of heavyweight boxing champion Tyson Fury, while Woodley was reportedly in talks to box fellow former UFC fighter Dan Hardy in spring of next year.

The loss of Paul-Fury has to come as a blow to Showtime given the amount of promotion that had gone into the matchup thus far. Paul and Fury have rarely missed an opportunity to publicly take shots at one another and that culminated in a memorable press conference two weeks ago in which Paul was involved in verbal dust-ups with both Tyson and the brothers’ father John.

Paul vs. Fury was scheduled to be an eight-round, 192-pound catchweight bout. It is not yet known whether the conditions will be the same for Paul vs. Woodley 2.