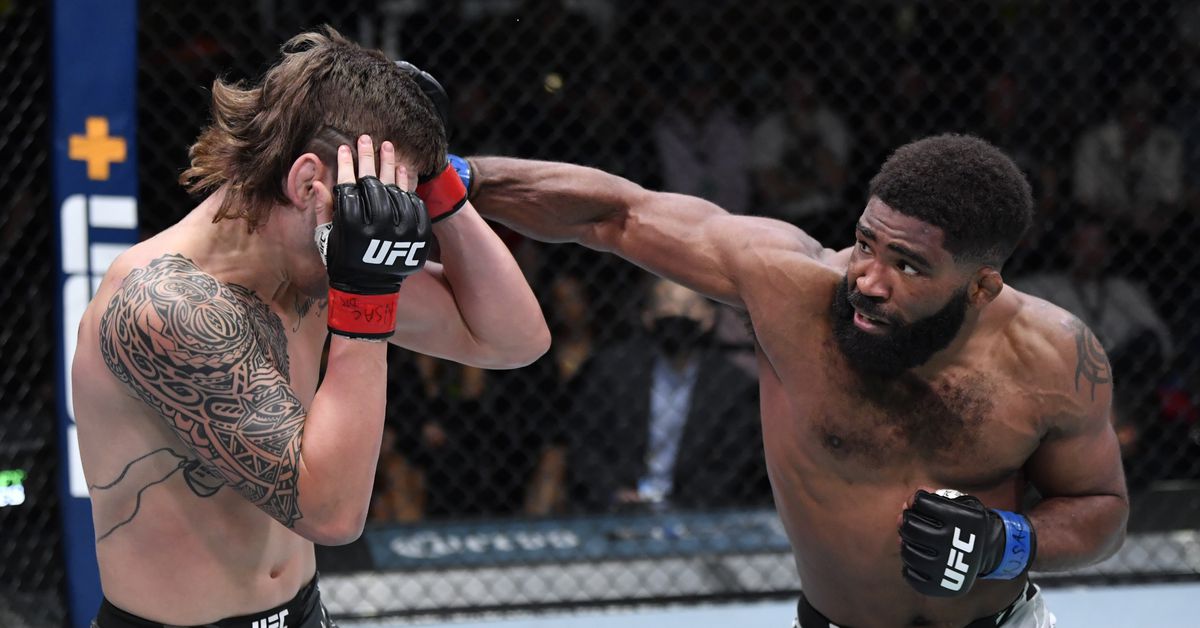 Chris Curtis has a little revenge on his mind.

The affable veteran — now 2-0 in the UFC following a TKO victory over Brendan Allen this past Saturday at UFC Vegas 44 — was paying close attention to another middleweight bout on the same card featuring his friend and training partner Maki Pitolo and Dusko Todorovic. In the featured preliminary bout, Pitolo lost by TKO, a result that has put Todorovic squarely on Curtis’ radar.

Curtis, a career welterweight, isn’t exactly sure what’s next for him, but he does like the idea of taking on Todorovic to potentially prove a point.

“But if I had to pick somebody, who’s the guy that Maki fought? … Dusko. Maki’s a really good friend of mine, I love him to death, and that fight killed me because you guys don’t understand how Maki is so much better — people are hounding on him — he’s so much better than that. He had a lapse in judgment that cost him the fight. It kills me because I have fought to the death with Maki and barely scraping out draws in the practice room and he makes one mistake and loses that fight. So I just want to go beat Dusko to show like, ‘Bro, I look at that not so much as you’ — [Pitolo] made a mistake. I just want to prove that we’re better than that, I know Maki’s better than that, Maki and I fight to the death. For my eyes, if I go and beat Dusko, I can kind of avenge my friend’s loss, it’s just that one hurts. I’d like to get that back.”

Pitolo had an 11-4 record before earning a contract on Dana White’s Contender Series with a memorable first-round finish of Justin Sumter. However, he has gone just 1-5 inside the octagon since and has lost four straight fights. On the other side of that bout, Todorovic snapped a two-fight skid.

It’s unclear when Todorovic will be ready to compete again and if a matchup with Curtis is of any interest to him, but Curtis is looking to stay busy now that he’s made it to the UFC after competing professionally for 12 years. Following his win over Allen, Curtis suggested the UFC find a way to get him on this weekend’s UFC 269 card in Las Vegas. Both of his UFC bouts so far have been booked on short notice.

“The thing is I’m always in full training camp,” Curtis said. “If I have two weeks or eight weeks, the only thing that really changes is some small things here and there. Maybe if I have eight weeks, maybe I’ll try doing a little more, try lifting finally or whatever, but my day-to-day life for the last eight, nine, 10 years has just been doing the same things over and over. I’m someone that trains seven days a week, I train really hard every day. My camp timewise, all I really need is eight weeks, six weeks, if you’re like, ‘Hey, I need you to go down to 170,’ because that requires work on my part.

“But as far as preparation goes — I agreed that I wouldn’t spar this week, but I’ll be in the gym Monday. I’m gonna hit bags, do a couple of classes and train, I don’t take time off, I’m not a guy who gets fat, I don’t go on vacation, this is just what I do.”

Curtis has now won two UFC fights in less than a month, capping off a 6-0 2021 campaign that began with four straight wins on the regional scene. He’s also collected two $50,000 Performance of the Night bonuses, which should help the fighter who stated that he was “hilariously broke” before making a successful debut at Madison Square Garden at UFC 268.

Despite all of his recent success, not much has changed for Curtis back at the gym.

“It honestly is a great feeling just because when the world gives you no chance to do something and you go do it,” Curtis said. “It’s just cool too because you get back to the gym and everyone who I see on a daily basis, everyone I train with is like, ‘We’re not surprised.’ It was less, ‘Congratulations,’ and more, ‘Good job not screwing up.’”

LIVE! Fury Vs. Chisora 3 Results, Streaming Fight Coverage
MMA fighters face ban if they stick with Krause
Jorge Masvidal Reacts To Teammate Kayla Harrison’s Shocking Loss
Could this interaction between Thompson and Holland been any more friendly? 🥹
Face, The Pain