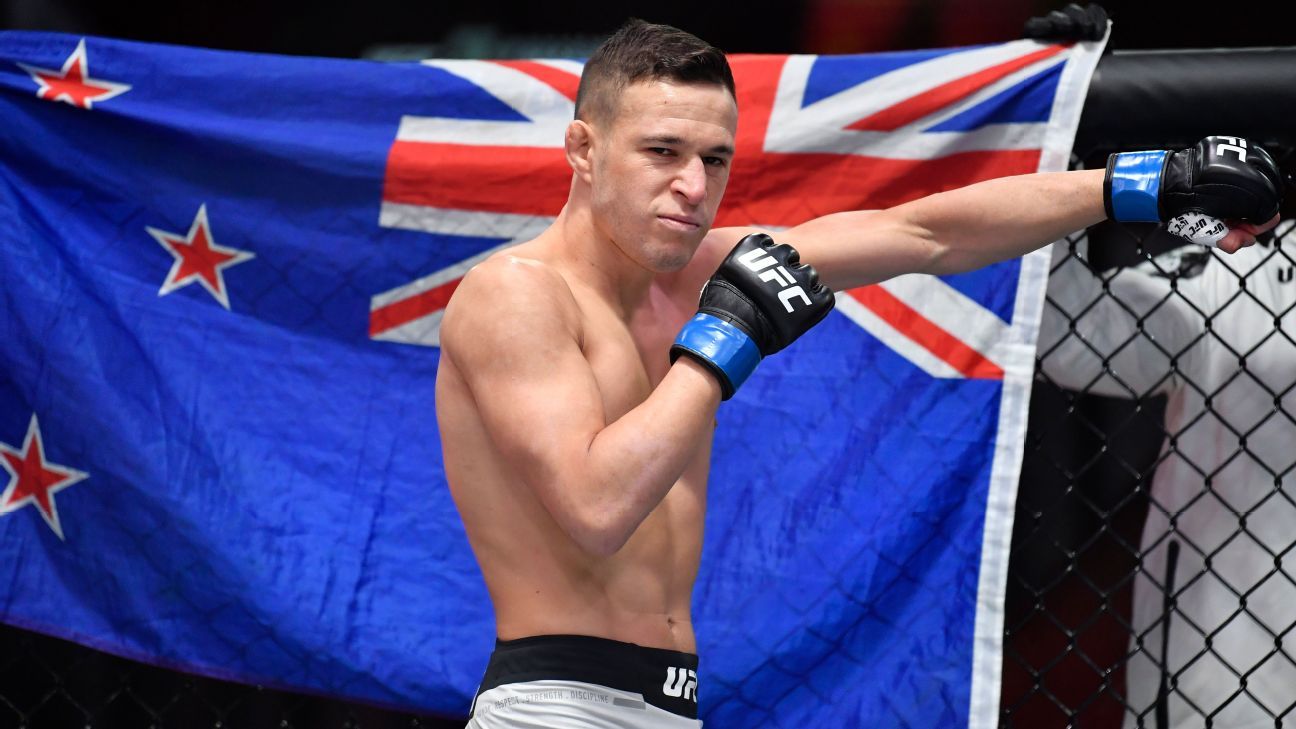 Kai Kara-France has promised to make Cody Garbrandt feel the weight cut in the American’s UFC flyweight debut, as the New Zealander dreams of a shot at the title in 2022.

The duo will face off in what promises to be one of the fights of the night at UFC 269, Kara-France returning to the Octagon for the first time since his eye-catching KO of Rogerio Bontorin in March of this year.

While he would have liked to have fought sooner, Kara-France explained that the opportunity to fight Garbrandt in his first flyweight bout was too good to refuse.

“I had a match-up in the pipeline with another opponent but then the UFC came back to me and said ‘actually Cody Garbrandt is talking about coming down to flyweight, do you want to welcome him to the division?’,” Kara-France told ESPN. “The UFC see me as an exciting up-and-comer, and this is a fan favourite fight, so of course I said ‘hell yeah, I’ll wait’ and that’s how it came about.

“Usually in City Kickboxing fashion, we like to do it with a few of us on the card, but unfortunately this time I’m doing it on my own. But it’s just business as usual, this is what motivates me, fighting the best guys in the world. And I get past the test of Cody Garbrandt and then I’m right there for a title shot, if not the next guy.

“So that’s why I’ve been training my a– off to make sure I get this job done, I want to make a statement and put him away, and get that title shot early 2022.”

Kara-France admits there is an element of the unknown when it comes to Garbrandt, not just for the fact that this is his first fight down a weight class, but also because he has had just five fights, four of which were losses, in the past four years.

When you compare that with Kara-France’s nine bouts over the same period, the Kiwi’s weariness is understandable.

There is also a two-inch (5 cm) height advantage for Garbrandt, though Kara-France says he is used to that and is fully prepared to take the fight to his opponent early.

He wants to put a marker down for his flyweight colleagues.

“He’s gonna be taller than me, but it’s something I’ve always had to deal with, that reach advantage, it’s just all about what’s he going to do. Is he going to come out firing and try to blow me out of the water or is he going to sit back and try and pick a shot and counter and then take it from there?

“I want to try and make him feel this weight cut, I want to put the heat on him early and make him realise he’s in a fight. He just can’t come down a weight class and expect to bully the smaller fighters at flyweight, I want to do it for the rest of the division and make a statement.”

Before his Round 1 KO of Bontorin in March, it had been a long time between highlight finishes for the man known as “Don’t Blink.”

Kai Kara-France breaks down his huge knockout of Rogerio Bontorin after spending much of the fight enduring submission attempts.

While he had gone three tough rounds with current flyweight champion Brandon Moreno, Kara-France was without a KO in the UFC until he unleashed a barrage of punches on Bontorin in what was a somewhat bizarre finish to their UFC 259 bout.

“That was a hard fight,” Kara-France explained. “The first thing [City Kickboxing coach Eugene Bareman] said to me was ‘don’t let him take your back’ and in the first 30 seconds I let him take my back. So I was struggling right from the start, but I just had to trust in the system that we have at City Kickboxing, just back myself and stay calm, so when I was in those tough spots and caught in those positions [I would be okay].

“I knew he was getting tired, obviously the chokes were tight, but I could feel him breathing heavy right in my ear. So once I was able to get him off my back, that was his best way of winning. He is a black belt Brazilian jiu-jitsu, that’s their bread and butter, but once we’re back on the feet that’s my bread and butter.

“I found my range, and the chin, and then I just had to trip him up. So overhand-uppercut-overhand, and then Herb Dean pulled me off and I got the Mark Hunt walkaway. But then I had to run back and finish it off because apparently Herb didn’t wave it off properly.

“So I’m happy I finally lived up to my nickname – there was a joke around the gym and I was going to ask the fans that if I didn’t get a knockout what’s my new nickname, I’ve got to change it – but thankfully I lived up to it. And that’s 10 knockouts on my record now, and that’s why this is an exciting match-up with Cody Garbrandt because he has got the same amount of knockouts on his record.”

As has been the case with his City Kickboxing teammates, and UFC colleagues across the ditch in Australia, the COVID-19 pandemic has presented Kara-France with serious challenges in his preparation for Garbrandt.

While New Zealand was largely spared much of the chaos that COVID brought to the world in 2020, an outbreak of the Delta variant proved too tough to contain this year, seeing heavy restrictions return to City Kickboxing’s Auckland base.

“It has been tough, I’m not going to lie,” Kara-France told ESPN. “We’ve had to adapt around a number of restrictions and just be creative with our training. But we’ve had a lot of time to prepare, so that’s what has kind of saved me in the lead-up to this fight. I’ve had a small bubble and we’ve been able to continue like normal and get in some quality training.

“So I’m very happy with how the camp has panned out. If we were a bit doubtful about the quality of training that we would have been getting in, I would have actually left the country and moved overseas to finish this camp off, but luckily enough we’ve been able to do the whole camp here and still get in the work. So I’m very thankful for that.”

With Moreno set to defend the flyweight strap in a rematch against former champion Deiveson Figueiredo in January next year, the next title shot could follow within the first half of 2022.

Currently ranked at No. 6, Kara-France would not only need to defeat Garbrandt but perhaps also need a further victory over a top-five fighter to put himself in contention for a title fight.

But the Kiwi feels as though he has never been closer, while he continues to draw inspiration from Israel Adesanya and Alexander Volkanovski as he pursues the ultimate UFC glory.

“This is what we work for, this is everything,” Kara-France said. “This is just the tip of the iceberg of all the hard work we’ve been doing. And for me, being able to fight for a UFC title has always been my dream, and being in the gym where we have current world title holders, I’m just reminded of teammates everyday about earning success and it rubs off on you every day.

“I would love for the borders to open up in Australia and New Zealand early next year; let’s bring the UFC back to Australia or New Zealand and let’s get a fight in my own country, my own backyard.

“I think it would be good for the UFC to bring itself back Down Under, because we want to put smiles on everyone’s faces. And I know whenever anyone from City Kickboxing fights, New Zealand really stops and for that day they forget what’s going on around them and they just want to enjoy the fights.

“So it’s a powerful thing and I can’t wait to get in there and make my people proud, put on a show, knock out a former champion and get a title shot.”