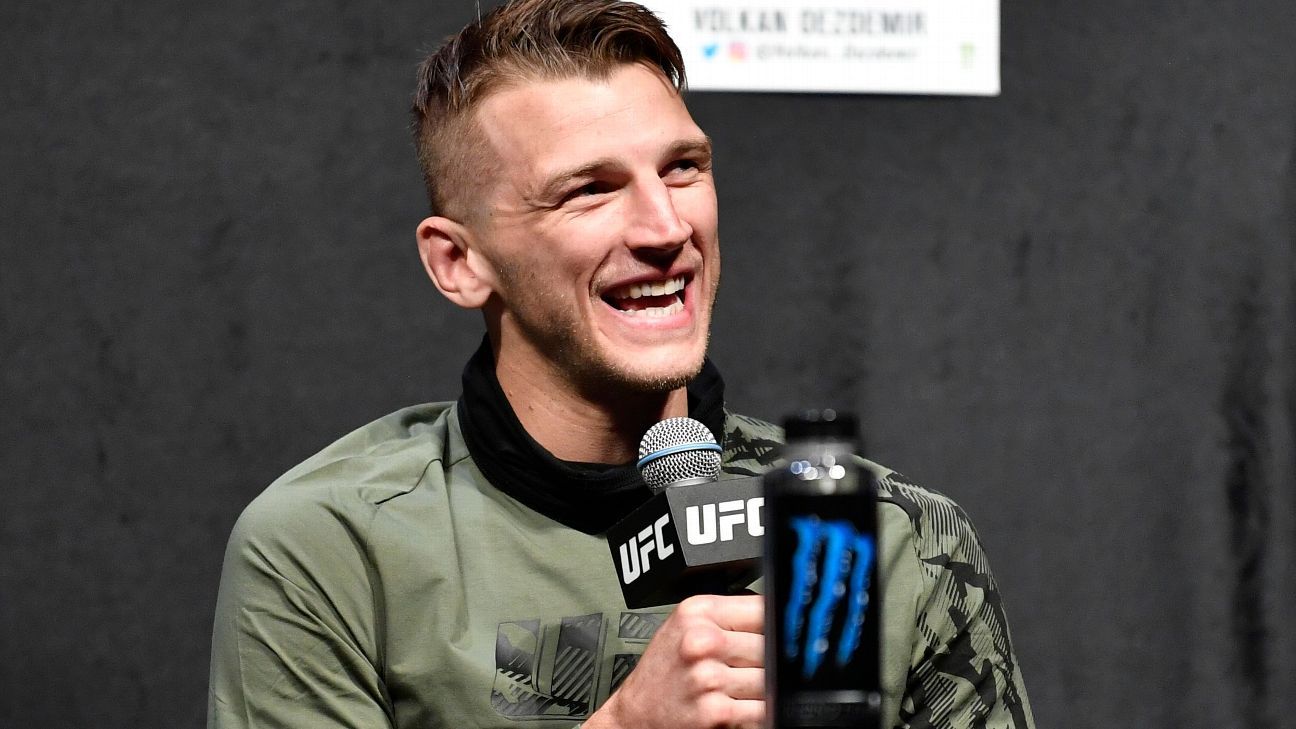 Dan Hooker says the chance for a fresh start and the opportunity to put himself back into the title mix are behind his move down to featherweight, which was officially rubber-stamped by the UFC on Monday.

Hooker has been booked to fight Arnold Allen, ESPN’s 10th-ranked featherweight, for the UFC’s return to London on Mar. 20. The New Zealander could not be more excited by the fresh challenge, admitting his lightweight career had hit a roadblock in recent times.

“I understand it was difficult times [at lightweight], I wasn’t creating any kind of excuse or anything like that, it’s just the reality of the situation that I’ve lost to three of the top five lightweights,” Hooker told ESPN.

In the UFC’s first card in England since 2019, English heavyweight Tom Aspinall looks to extend a seven-fight win streak — all finishes — against the veteran Alexander Volkov.

“So to get yourself back in the mix and into title contention [at lightweight] would take the next year and fighting backwards or downwards, and sitting and waiting. I’m at the stage of my career where that doesn’t excite me, that doesn’t entertain me. I don’t fight because I need the money, I don’t fight because I need the attention, that’s not why I fight. I fight for a world title and I fight and take these opportunities because it excites me, it excites me to get out there. Sitting and treading water in the lightweight division, that doesn’t excite me. But moving down to the featherweight and getting a win over a top 10 fighter puts me straight back in the mix. This is not treading water.

“So I make, in my opinion, a very easy weight cut and fight down a weight class, and then you’re one fight away from being back in the mix and back in title contention. That’s why I’m doing it, because it excites me.”

Hooker made his intention to shift down a weight class public late last year, publishing an image to social media of him achieving the “easy” weight cut to 145 pounds, but he says the switch back to featherweight had been on his mind all year, despite the reservations of his team at City Kickboxing [CKB].

“At the beginning of last year, I believe I floated the idea past [Eugene Bareman] and he was not that keen,” Hooker said. “So yeah I just went and did it this time. I obviously didn’t just freestyle it. I worked with Jordie [Sullivan], The Fight Dietician, and then Charles [Stull] and Clint [Wattenburg], the guys at the [UFC Performance Institute], I was utilizing that time when I was in Las Vegas and was stuck hanging around the PI like a bad smell, so I just used that to my advantage.

“Those guys are some of the best in the world at what they do and so I used their state-of-the-art technology and body scanners just to get a good accurate reading of what is the best move, and they were all for it. So I did it the right way and have worked with the smartest in the world in this avenue of the sport and executed rather painlessly.”

It has been more than five years since Hooker last fought at featherweight when he lost via unanimous decision to Jason Knight at UFC Fight Night 101 in Melbourne, Australia.

But Hooker believes some fight fans have either forgotten that he has actually had six fights in the UFC at featherweight, or didn’t realize that fact at all, particularly when he first proved how easy the cut to 145 had been last November.

Hooker isn’t concerned about a loss of knockout power at the lighter division either, saying his diet is really the only thing that changes when it comes to the preparation for a fight at featherweight.

“Just less beers on the weekend,” Hooker quipped. “But these are the sacrifices you’ve got to make as a professional athlete. My diet I would do for just two or three weeks [at lightweight], I would just do for five or six weeks [at featherweight]. It’s just a little bit more sacrifice, but I’m definitely not sacrificing quality of training or the intensity of training, that’s non-negotiable.

“The workload at our gym at City Kickboxing is non-negotiable; this is what you’ve got to do, this is the price you’ve got to pay to get out there and fight. You couldn’t go to our coaches and be like ‘Mondays I only want to do four rounds, not eight rounds,’ it’s just not going to happen. You need to fuel yourself to keep up with the workload of our training.”

With a 3-3 record at featherweight in the UFC, Hooker knows that the drop back to 145 pounds doesn’t guarantee automatic success, and so he is prepared for a huge first-up test against Allen, who has strung together eight straight wins in the promotion. But he cannot shake the desire to have a UFC belt wrapped around his waist, even if that could present some interesting conversations with the current featherweight champion and his CKB teammate: Alexander Volkanovski

“We haven’t had any beers [since I decided to move down]. I think once we have a few beers [together] I’ll start giving him the wind-ups, but we’ll come that bridge when we cross to it,” Hooker told ESPN.

“He’s a teammate, and that could be [tricky], but it is such a volatile sport and there are so many different things that could happen before I even fight in the division to be worried about a title shot or anything like that. He’s got just as much chance of going up and fighting for the lightweight title, that’s a strong possibility for Volk as well.

“So let’s cross that bridge when we come to it.”