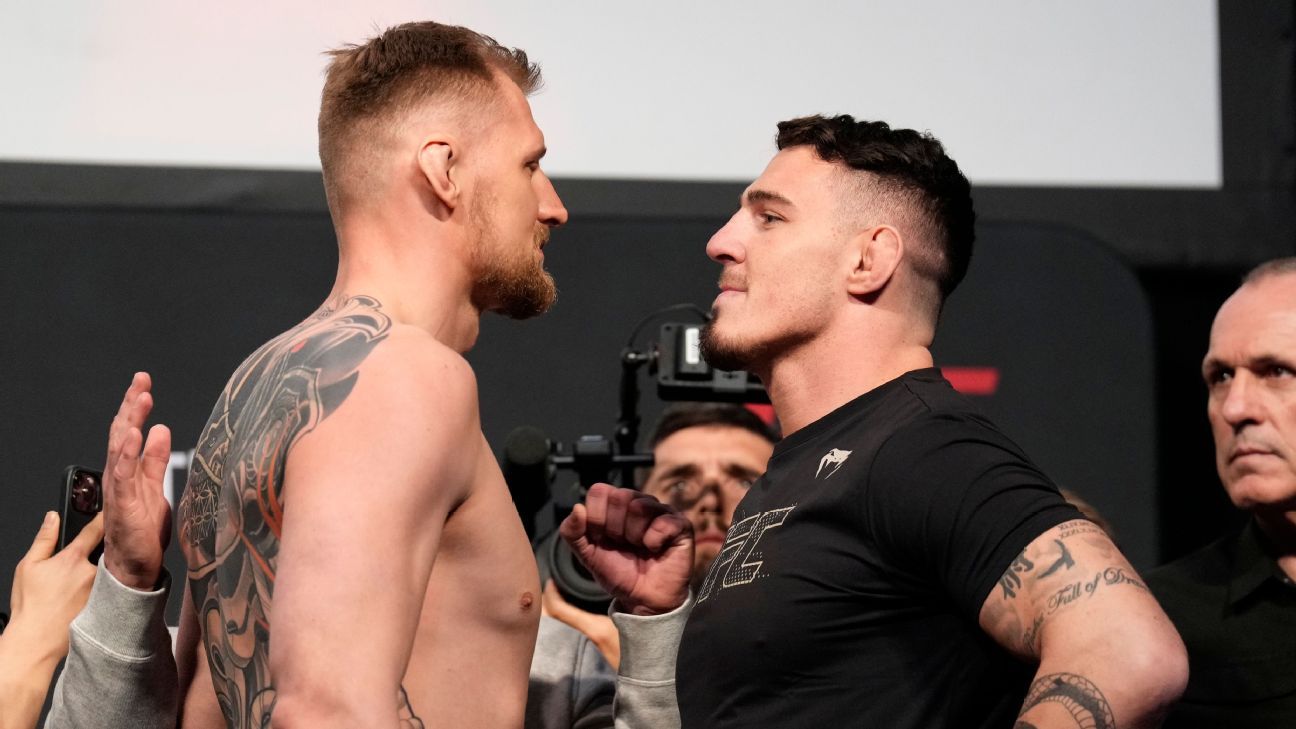 LONDON — The UFC is back in the United Kingdom for the first time since March 2019, with a main card featuring plenty of the region’s most promising talent.

In the main event, England’s Tom Aspinall (11-2) will try to remain unbeaten in the UFC against Russia’s Alexander Volkov (34-9). Aspinall, 28, has made an instant impact in the division already, with four consecutive finishes in the Octagon. He trains out of Liverpool with Team Kaobon. Volkov has won three of his last four, scoring knockout wins over Alistair Overeem and Walt Harris. His lone loss comes to former interim heavyweight champion, Ciryl Gane.

The co-main event is an equally important fight. Fan favorite Dan Hooker (21-11) is fighting at featherweight for the first time since 2016, following an up and down run at lightweight. He faces Suffolk, England’s Arnold Allen (17-1), who is on an eight-fight win streak and creeping into title contention.

Follow along as Brett Okamoto and Marc Raimondi recap the action as it happens or watch the fights live on ESPN+.

Mr. Finland silenced the English crowd, which is no easy task.

Grundy shot for a single-leg takedown right from the bell. Amirkhani was quick with a counter. He grabbed Grundy’s neck for a guillotine choke. When Grundy defended, Amirkhani switched to an anaconda choke, turned his hips to get into a better position and put Grundy to sleep. Referee Rich Mitchell stopped the bout via submission at just 58 seconds of the first round.

“We were fighting for our job,” Amirkhani said in his postfight interview. “I just wanted it more.”

Amirkhani said he’s willing to return to the Octagon as early as next week. He added he’s about to become a father.

Amirkhani, 33, snapped a three-fight losing streak with the quick victory. The Iran native, who lives and trains in Finland, had only one win coming in since 2019. Grundy, a 35-year-old England native, has dropped three straight following an eight-fight winning streak.

Pavlovich, of Russia, didn’t throw a terribly high number of strikes against Abdurakhimov — but the ones he did, he made them count.

Pavlovich finished Dagestan’s Abdurakhimov with strikes on the ground at 4:03 of the opening round. The finish came after Pavlovich dropped Abdurakhimov with a right hand to the chin. Abdurakhimov didn’t go out from the shot right away, but he could never recover. He turtled, covered his head and tried to get up but Pavlovich put it away with punches.

It was a decisive finish for what had been a pretty tame fight to that point. Pavlovich landed 22 total strikes according to UFC Stats. Abdurakhimov landed 17.

The right hand was a clubbing weapon for Pavlovich, however, and improved his UFC record to 3-1. His only loss was against Alistair Overeem in 2018.

Just the way Craig drew it up.

Krylov got top position quickly and rained down hard ground and pound, nearly knocking Craig out at one point. But whenever Craig is on his back, he remains as dangerous as any fighter in the world in that position. Craig threw up a triangle choke submission and the overly aggressive Krylov had no choice but to tap at 3:57 of the first round.

It was Craig’s fifth triangle submission in the UFC and several have come in come-from-behind fashion, including a win over Magomed Ankalaev in 2018 with just one second left in the fight.

Afterward, Craig said he wanted to fight Anthony Smith in Glasgow next in June, a five-round main event.

The fight started hot with Krylov coming across the Octagon, landing a front kick and a punch. Craig went for a takedown, but Krylov scrambled to the top. He did good work from that position, landing hard hammerfists and some elbows.

Craig was rocked at least once, but all he needs is his opponent to make one mistake. Craig was able to break Krylov’s posture, throw up the triangle choke and force the tap.

Craig, 34, is unbeaten in six straight fights, including four straight victories. The Scotland native has stopped four straight opponents, as well, and has eight finishes overall in the UFC, tied for the fifth most in UFC light heavyweight history. Krylov, a 30-year-old Ukraine native, has dropped four of six fights.

Shore earned his 16th straight victory as he scored the unanimous decision over Valiev. This was only the fourth victory by decision for Shore.

Shore, who struggled in the opening round, found his groove and navigated through Valiev’s pressure to secure multiple takedowns and land punches in bunches. In the third round, Shore knocked down Valiev with a hard right hand early, and connected with another combination late that sent Valiev to the canvas.

Shore now has five wins in the UFC.

Reed earned her first UFC victory with a split-decision victory over the Wales native McKenna. Reed, a +240 underdog according to Caesars Sportsbook, recovered from an opening round knockdown from McKenna and was able to surge forward in the latter rounds.

McKenna, a promising prospect at 115 pounds, suffered her second loss of her MMA career, both of which have been by split decision.

Mokaev’s first fight in the UFC was a quick one, as he disposed of Durden with a guillotine choke just 58 seconds into the first round. It was the second fastest submission in UFC flyweight history.

The undefeated flyweight opened the card in London with a flying knee that dropped Durden, then sprung to take his opponent’s neck as Durden tried to recover.