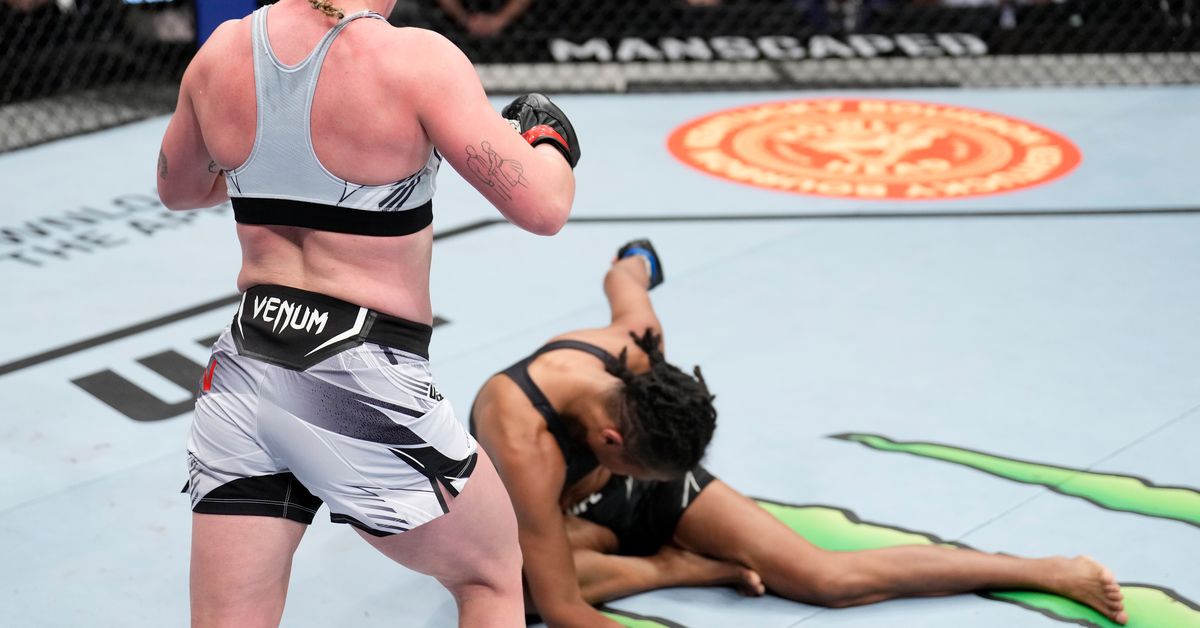 Molly McCann just put her name into contention for a knockout of the year following her stunning finish at UFC London.

There was no slowing down from McCann from the start of the fight until the end when she got locked in a clinch with Luana Carolina before unloading a spectacular spinning back elbow that crushed the Brazilian. Carolina crashed to the canvas as McCann rushed to celebrate the victory in front of her home audience in England.

“We drill that everyday,” McCann said about her knockout. “I’m ready to go. I’m ready to punch all night. Thank you very much [Luana Carolina] for pushing me. I’m so bloody happy.”

With the entire O2 Arena behind her, McCann came out firing like she was looking for the first-round finish as she tagged Carolina with a punch that stunned the Brazilian against the cage. McCann started unleashing a barrage of punches in succession that continued to blast Carolina in the head and body.

While Carolina was obviously hurt, she was able to hold on to slow down the action while McCann had to settle into a rhythm to prevent running out of steam from the furious start. Carolina was desperately trying to keep McCann off her but the Liverpudlian just kept putting forward pressure while punishing her with combinations that were doing a lot of damage.

The assault continued into the second round with McCann keeping the foot down on the gas but then putting Carolina down with a well-timed takedown. To her credit, Carolina avoided absorbing many shots on the ground and then started to tag McCann with knees and some sharp elbows once the fighters got back to the feet.

With no desire to let Carolina forge a comeback, McCann once again started swinging hard and heavy combinations until she closed the distance on her taller opponent. That’s when McCann unleashed the spinning attack that blindsided Carolina and separated her from consciousness immediately.

McCann has enjoyed plenty of wins during her career but none sweeter than this one as she almost assuredly secured a post-fight bonus and her second consecutive win in a row.