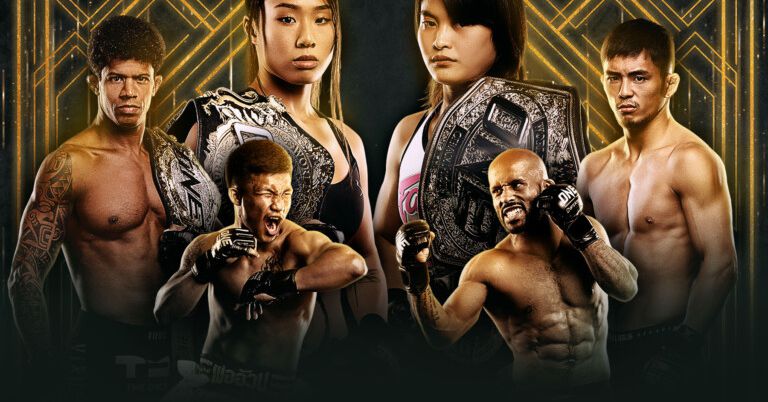 ONE X is set for the Singapore Indoor Stadium this Friday (March 25). The event has been postponed from 2021 but will commemorate the promotion’s tenth anniversary.

The main event features the eagerly anticipated return of Angela Lee. In addition, former UFC champion Demetrious Johnson and international sensation Shinya Aoki both make their way back to the ONE cage.

Here’s part one of my ONE X preview:

Asha Roka (4-2) hasn’t won a fight since 2017 but she did go the distance with Gina Iniong in her most recent contest. She couldn’t prevent the Filipina from taking her down but was able to survive despite spending most of the fight on her back.

Alyse Anderson (5-2) holds a Brazilian jiu-jitsu (BJJ) blue belt and her game seems to revolve around grappling. Her striking looks quite limited but she likes to close the distance in order to tie opponents up in the clinch and try to take them down.

Ryuto Sawada (14-7-1 ) has a wrestling background and his wins typically come by way of either submission or decision. He will be looking to get this fight to the floor as soon as possible.

Senzo Ikeda (13-6-1) turns 40 this year but comes into this contest on back to back wins. He likes to crouch down, hang his hands low and punch with the sort of power that helped him establish an 8-0 record in boxing.

Danielle Kelly has beaten mixed martial artists like Carla Esparza, Roxanne Modafferi and Cynthia Calvillo in grappling bouts. She has been a BJJ black belt since 2020.

Mei Yamaguchi has focused more on MMA and has a lot of experience with 36 fights to her name. She’s got nine submission wins and has never been submitted but 25 of her fights have gone the distance.

Kang Ji Won (5-1) is best known for knocking out Amir Aliakbari but he was swiftly submitted last time out which gives you a pretty good indication of where his strengths and weaknesses lie.

Paul Elliott (3-0) has been fighting in England and his opponents do not have good records. Tapology even took a win off him because they deemed the fighter he had beaten to be deliberately losing bouts. He faces a big step up here.

Amir Khan (13-8) comes from a Muay Thai background but has been training in MMA for nearly a decade and is confident on the ground. He has lost five of his last seven and one of the wins was a dubious decision.

Ryogo Takahashi (14-5) is a patient counter striker who will try to bait opponents and wait for them to overcommit so he can catch them on the way in. It is not the most exciting style but if he gets his timing right the Japanese fighter has the power to put anyone away.

Lito Adiwang (13-4) comes from Team Lakay and has a wild and aggressive style. Wrestling is not his strong point, something Jarred Brooks proved conclusively in his most recent fight.

Jeremy Miado (10-4) has a wide stance, hangs his hands low and looks to step in and throw bombs. He’s knocked out four opponents like this since signing for ONE Championship including former champion Dejdamrong Sor Amnuaysirichoke.

Reinier de Ridder does not appear to have much of a competitive background in submission grappling. But he holds black belts in BJJ and judo and will have a huge height advantage here.

Andre Galvao is one of the best grapplers on the planet and, on paper at least, this should be an easy match for him. He is a 19-time BJJ world champion but will be nearly one-foot shorter than his opponent.

Sitthichai Sitsongpeenong is a southpaw who is very adept at using his left body kick to control opponents, throwing in the occasional left knee just to keep them guessing. It is a strategy which enables him to control fights but he generally goes the distance.

Chingiz Allazov has stopped his last two opponents in the opening round. He plants his feet and throws punches to the head and body but mixed up the attacks with teeps and kicks.

Fans can watch ONE X (Part I) at watch.onefc.com, as well as on Facebook, YouTube and the ONE Super App.