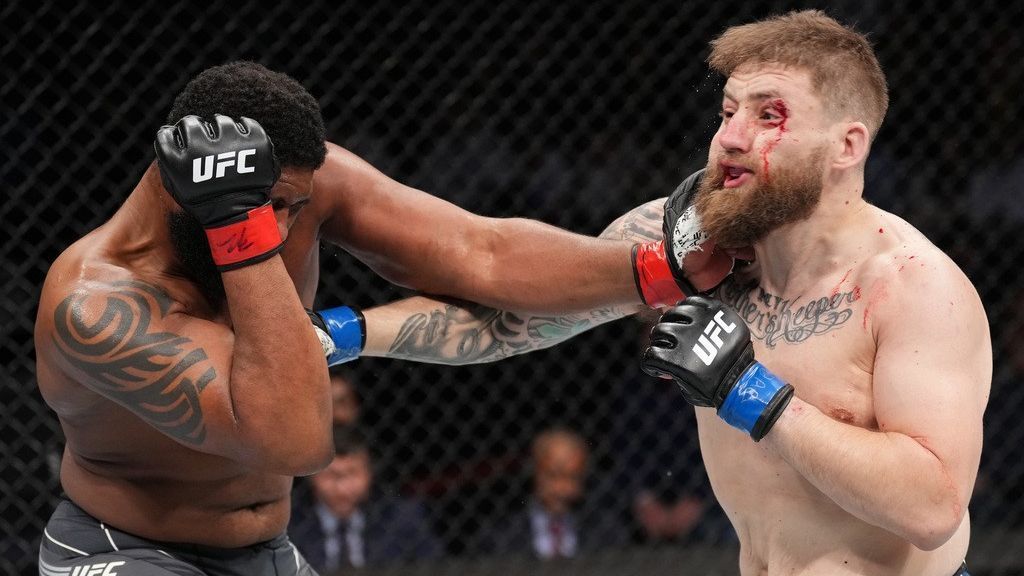 Curtis Blaydes, one of the most unapologetic wrestlers in the UFC, decided to show off his hands on Saturday.

A former collegiate wrestler, Blaydes (16-3) produced a highlight-reel finish over Chris Daukaus (12-5) in the main event of UFC Fight Night at Nationwide Arena in Columbus, Ohio. The finish came just 17 seconds into the second round, when Blaydes dropped Daukaus with a powerful straight right and finished him off with strikes on the ground.

Blaydes, who has embraced his identity as a wrestler throughout his career, admitted he wanted to make “a statement” on Saturday — and said he knew Daukaus expected him to wrestle.

“I wanted to put out a statement,” Blaydes said. “I know everybody in here, including Chris Daukaus and his corner, everyone at home, were all expecting a [takedown]. That slows you down. You’re waiting for me to wrestle. Well, I’m looking to do both. I saw the opportunity, and it worked.”

Blaydes, who improved to 11-3 in the UFC, called for an interim title fight — possibly against former light heavyweight champion Jon Jones or former champion Stipe Miocic.

“I want to be just like you, Stipe,” Blaydes told Miocic, who was in attendance in Columbus. “That means I might have to beat you.”

The UFC’s current undisputed title belongs to Francis Ngannou, who just underwent knee surgery this month. He is not expected to fight again until 2023. That might leave the door open for the creation of an interim championship, although the UFC hasn’t officially announced its near-future plans for the division.

Blaydes, of Chicago, certainly gave the promotion something to think about. He did not attempt a single takedown against Daukaus, relying completely on a repertoire of low leg kicks and pretty slick boxing skills. He hurt Daukaus with a right hand in the first round, prior to putting the Philadelphia native away in the second.

In the final sequence, Daukaus, who has eight career finishes inside the first round, managed to land a right hand of his own, but it was a split second behind the one thrown by Blaydes. The fight probably could have been called immediately, as Daukaus crumpled from the shot and could do nothing but cover up.

Blaydes has won six of his past seven bouts. He has been very consistent throughout his UFC career, however his losses have been big ones. He was finished by Ngannou twice — in 2016 and 2018 — and most recently lost to Derrick Lewis via second-round TKO in February 2021.

This is Blaydes’ seventh finish in the UFC.