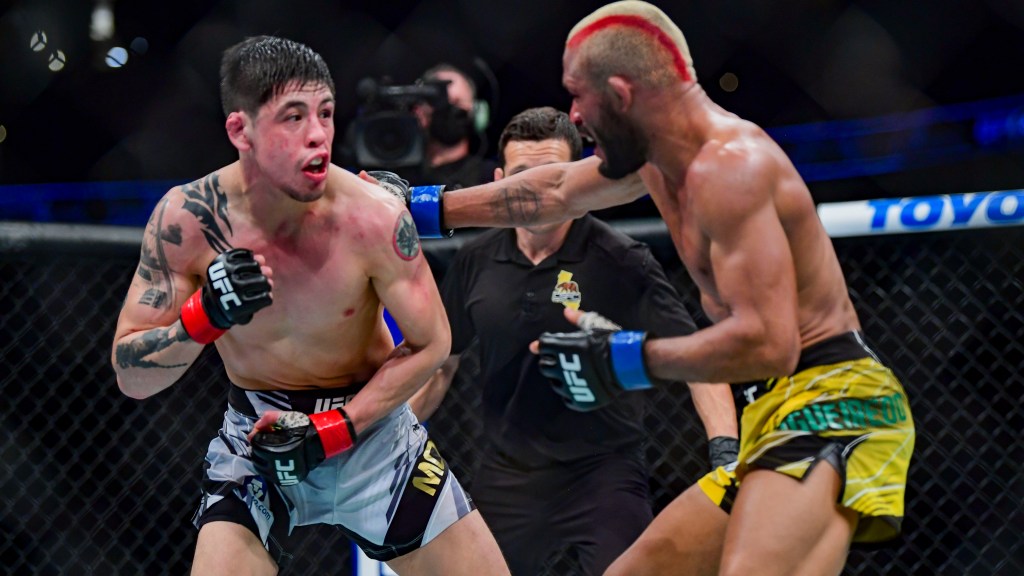 Brandon Moreno thinks Deiveson Figueiredo is doing everything he can to hang on to the UFC flyweight title and avoid a fourth fight.

Moreno (19-5-2 MMA, 7-2-2 UFC) and Figueiredo (21-2-1 MMA, 10-2-1 UFC) are currently engaged in one of the most unique rivalries in UFC history. They’ve fought three consecutive times, with each man winning one bout with the other ending in a draw. They’ve spent more than one hour of cage time against each other since December 2020, but it still remains unclear who is definitively better.

Coming off Figueiredo’s razor-thin unanimous decision at UFC 270 in January to regain the 125-pound strap, the promotion has reportedly been moving in the direction of a fourth meeting this summer. However, Figueiredo has recently been vocal about his opposition to that plan, citing multiple reasons.

Figueiredo said he views Kai Kara-France, who is coming off back-to-back wins over Askar Askarov and Cody Garbrandt, as a more viable challenger. Additionally, he said he thinks Moreno is unworthy of a championship opportunity after one of his teammate engaged in what he considered to be racist social media activity.

During a UFC 270 press conference, Moreno’s teammate Marcelo Rojo hosted an Instagram live stream. A screenshot from the session showed a filter of a monkey head on Figueiredo’s body, which upset him because he’s on “a campaign to stop racist and prejudice in my city where it is predominately Indians and blacks.”

Moreno responded to Figueiredo’s comments and explained his side of the story in an interview with ESPN Deportes.

“It’s just stupid,” Moreno said in Spanish. “He was playing with his phone and he was streaming live on Instagram and he was using many filters. It’s a shame we don’t have the full video because it was a live stream, he didn’t save it. He was using filters on everyone. Dana White, my teammates and he even used a filter on me. He was switching filters and then appears a monkey filter on Figueiredo, that’s true and someone took a screenshot. We don’t know who, and (he) starts calling Marcelo Rojo a racist. And you know Marcelo, you’re not going to let me lie: He’s not racist.”

Although Moreno appears to understand the sensitivity of the issue at hand, he doesn’t think it’s good reasoning for the UFC to switch gears and give Kara-France the next title shot over him. Moreno is convinced Figueiredo is just using any tactics he can to avoid the fourth fight.

“I’ve already talked to the UFC, with the top guys in the promotion,” Moreno said. “They told me the fourth fight is set. At some point they told me not to worry. That the plan is for me to fight again for the title. So I think at this point Deiveson is running away from me. I’m not lying. UFC wants Deiveson Figueiredo vs. Brandon Moreno 4. I’ve said yes already, but the other part hasn’t.”

UFC president Dana White has publicly stated in the past that he takes a champion’s opinion into consideration when matchmaking. It remains to be seen if White and the UFC brass will give Figueiredo’s request to fight someone other than Moreno any real serious thought.

From Moreno’s perspective, though, it’s full steam ahead.

“He needs to understand that he’s still the B-side on this, and that’s not my fault,” Moreno said. “I’m just here to fight and be the best. … Chances for him to lose this fight against me are very high and he sees a better opportunity vs. Kara-France to keep the belt and make some money. But he knows that the only ‘money fight’ for him is with me. Simple facts.”