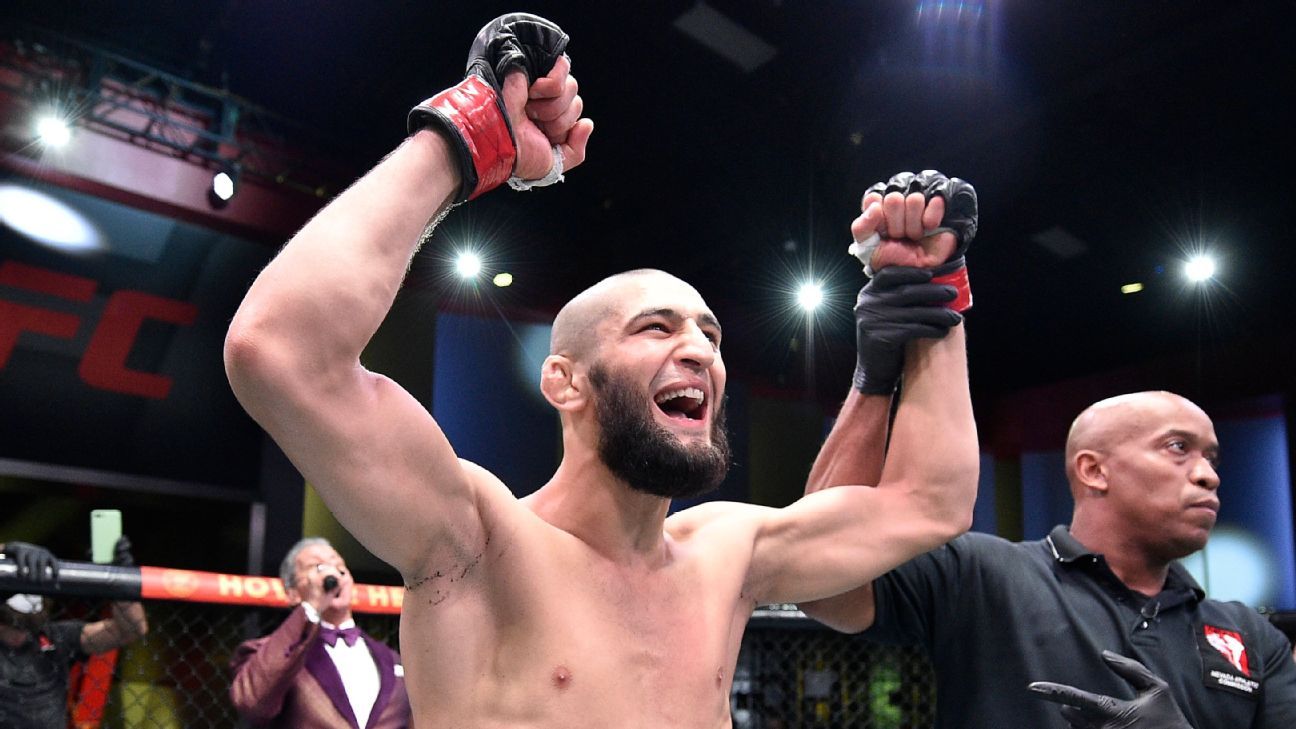 Editor’s note: Khamzat Chimaev faces the biggest test of his career on April 9 at UFC 273, taking on top-five welterweight Gilbert Burns. This story has been updated since being published in October following Chimaev’s most recent fight.

After an absence of over a year, Khamzat Chimaev returned to the Octagon at UFC 267 on Oct. 30, and he did not miss a beat. Chimaev scored a first-round submission of Li Jingliang to become 4-0 in the UFC, 10-0 overall in his MMA career. He has finished every opponent, seven of them in the first round. He has never seen a Round 3.

But those are not the only numbers that have drawn attention to the 27-year-old Chechnya-born Swede.

Chimaev burst on the UFC scene with a vengeance in the summer of 2020, finishing three opponents in barely two months with thoroughly dominant performances. But then he spent 13 months on the sideline, his career derailed by a difficult bout with COVID-19. Once he was healthy, he picked up right where he left off and continued his historic run.

Here are some of Chimaev’s astounding numbers (courtesy of ESPN Stats & Information), beginning with his first UFC appearance:

Chimaev landed 118 strikes in the first round of his July 16, 2020, Octagon debut, a fight in which he went on to submit John Phillips by second-round D’Arce choke. That’s a punch or kick every 2½ seconds, right out of the gate. Chimaev’s strike total made him the first middleweight in the UFC’s modern era to land at least 100 in a first round. His 118 strikes were the second most by a UFC 185-pounder in any round. If only he knew the number to beat was 120, a mark established by Ryan Janes in the second round of a 2017 bout against Andrew Sanchez, Chimaev might well have snuck in three more punches before the horn to get the record. He was that much in control.

Over the full fight, Chimaev outstruck Phillips 124-2 in total strikes and 43-1 in significant strikes. Chimaev’s plus-122 differential was the fifth-best debut by a middleweight in the UFC, behind only Phil Baroni, Ivan Salaverry, Logan Clark and Jon Fitch. No one has done better than Chimaev since 2006.

It took Chimaev just 10 days to become 2-0 in the UFC. The span of time between his July 16 debut and his July 26 first-round TKO of Rhys McKee in a welterweight bout is the fastest turnaround between victories in UFC history. It was the shortest turnaround time between fights, period, until last October, when strawweight Loopy Godinez competed seven days after scoring a quick submission over Silvana Gomez Juarez. However, Godinez lost her Oct. 16 bout (unanimous decision to Luana Carolina), so Chimaev’s record for a winning turnaround stands.

“Where is my belt? Soon. I smash everybody.”@KChimaev makes it easy to believe him 😳 #UFCFightIsland3 pic.twitter.com/drcfAvJHn4

Chimaev piled up a 68-0 advantage over McKee in total strikes, and wasted no time in doing so. He raced across the Octagon at the start, got a hold of McKee in the first five seconds, carried him across the cage to where his own coaches were, deposited McKee on the canvas and went to work. McKee did not even attempt a strike — making Chimaev’s 40 significant strikes the most in the UFC’s modern era against an opponent who did not attempt a strike.

Wow, who in the world is khamzat Chimaev? This dude right here just smashing dudes. Two of em in a week. Wow

Chimaev’s significant strikes advantage through two UFC fights was 83-1. That’s the most strikes landed in the modern era by a fighter who absorbs one or fewer. His total strikes advantage of 192-2 made Chimaev just the second fighter in the modern UFC to land at least 100 and absorb two or fewer in his first two bouts, joining future heavyweight champion Cain Velasquez (141-2).

This will be interesting. Obviously the style of Khamzats last 2 opponents played into his style. Now he fights a grappler. Will be interesting to see what he can do and if the hype is real.

Chimaev got his third UFC win on Sept. 19, 2020, knocking out Gerald Meerschaert in just 17 seconds — with one punch. The KO is tied for the third fastest in UFC middleweight history. Mark Weir owns the record with a 10-second KO of Eugene Jackson in 2002. Terry Martin knocked out Jorge Rivera in 14 seconds in 2007. And John Phillips — the losing fighter in Chimaev’s debut — shares third place with a 17-second KO of Alen Amedovski in 2019.

The 66 days between Chimaev’s July 16 debut and this smashing victory on Sept. 19 make him the quickest fighter to 3-0 in the UFC’s modern era, surpassing Johnny Walker (105 days). Chimaev is also the fastest to score three wins at any point in a UFC career, bettering Bobby Green (84 days).

There is no doubt now. @KChimaev is THE TRUTH.

Over three fights in 2020, Chimaev landed 196 strikes and absorbed just two, the second-best ratio in UFC history for a fighter with at least three bouts in that year. The only fighter to turn in a more dominant year — by this standard, at least — was Royce Gracie, who landed 19 strikes and absorbed none at UFC 1. Gracie defeated three opponents (Art Jimmerson, Ken Shamrock and Gerard Gordeau) on Nov. 12, 1993, en route to becoming the UFC’s first champion.

In the UFC’s modern era, no one comes close to Chimaev. The next-best striking ratio for a year was the 280-20 advantage turned in by Phil Davis in 2010.

After an absence of over a year, Chimaev needed just 3 minutes and 16 seconds to finish Li Jingliang by rear-naked choke. The finish might have come even sooner if Chimaev hadn’t taken the time to speak to UFC president Dana White while the fight was going on. Chimaev absorbed zero strikes while dishing out 58, including 25 significant strikes.

Chimaev’s four trips inside the Octagon have produced total domination:

Chimaev pocketed a $50,000 bonus for performance of the night after each of his four UFC bouts. No other fighter has done that through four UFC appearances.

At UFC 273 on April 9, Chimaev faces Gilbert Burns, his first top-10 opponent (Burns is No. 3 in the ESPN welterweight rankings). A little over a year ago, the 20-4 Brazilian challenged Kamaru Usman for the title, losing by third-round TKO. Burns is a multiple-time jiu-jitsu world champion with eight submission wins in his MMA career. A victory over him would legitimize the Chimaev hype and put him in title contention.