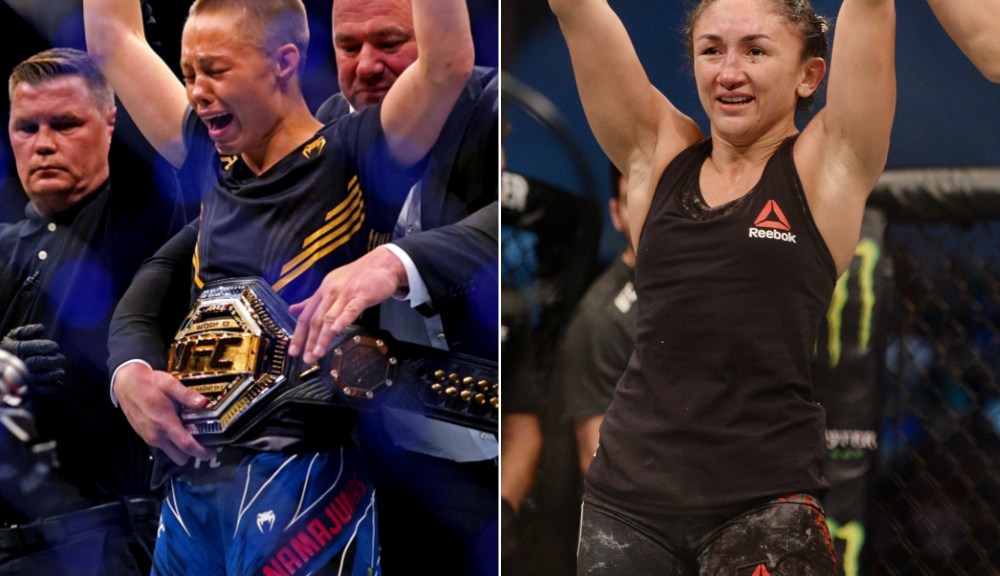 Esparza was able to use her wrestling to submit Namajunas and become the inaugural UFC women’s strawweight champion, but Dern thinks Namajunas’ ground game has come a long way since then.

“I think Rose is going to win just because I think she’s evolved so much in all different areas,” Dern told MMA Junkie. “Her ground, her takedowns – I mean just with her fight with Zhang Weili, they were taking each other down. So to see Rose getting the takedowns in that fight and stuff like that was really entertaining. Her striking – she’s precise. Her striking is just looking so good.”

Dern (11-2 MMA, 6-2 UFC), who’s a ground specialist herself, admires how Esparza is able to implement her gameplan no matter the style of opponent she faces. But ultimately, she thinks Namajunas will be able to handle Esparza’s wrestling.

“I think Rose is is going to get the win, but I won’t be surprised if Carla gets an upset or something like that,” Dern said. “Carla has just gotten so good at implementing her game, and it’s like, who’s is going to win? The person that’s kind of more all around, or the person that’s Khabib-style that knows their game and can implement it and just put on that pressure no matter who she fights? That’s what I think Carla really brings to the table – that she’s good and no matter who she fights, she’s able to put her game (in place). I’m not like that.

“I know everyone says, ‘Take it to the ground, take it to the ground,’ and all of a sudden when I see I’m two rounds in and I’m striking, and I’m liking the striking – but obviously my striking is not exactly where I am with the other girls. So the fact that Carla has that experience and that maturity as a fighter to put her game with whoever, I think that’s dangerous. But I don’t see Rose giving up her neck or the back like she did the first time.”

Winner of four of her past five, Dern will look to continue her ascent up the strawweight ladder when she meets Tecia Torres at UFC 273 on April 9.