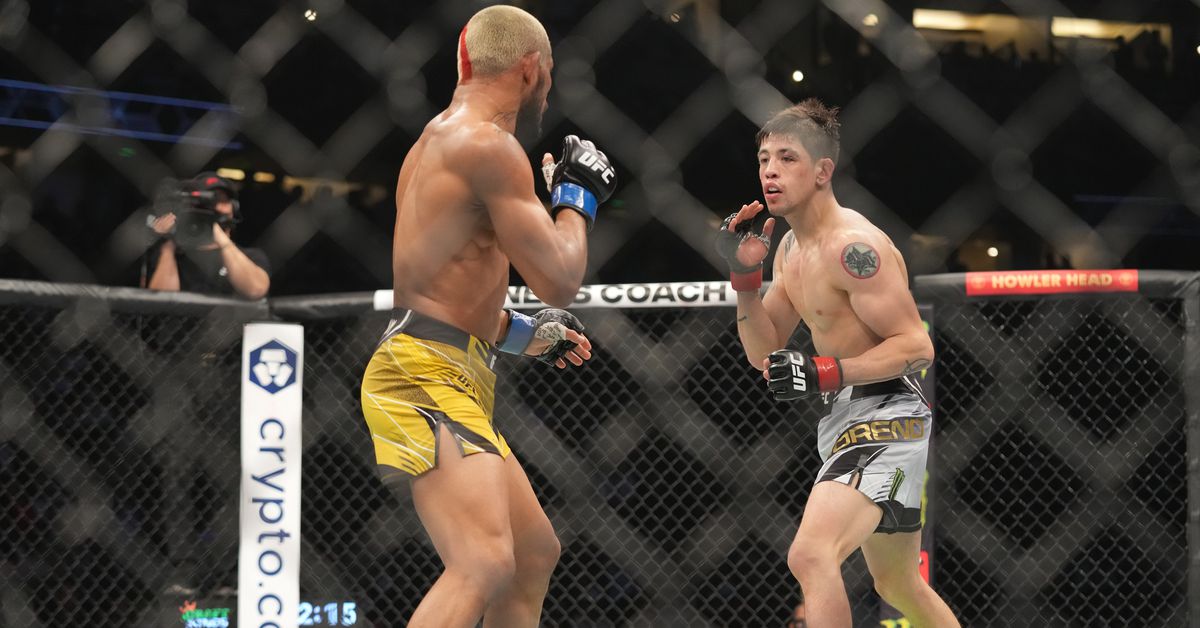 For the first time in UFC history, two fighters are likely to fight back-to-back-to-back-TO-BACK! Brandon Moreno and Deiveson Figueiredo are 1-1-1 in their previous trio of clashes, and without a truly standout top contender (sorry Kai Kara-France), booking the quadrilogy next seems the best move.

UFC is on board.

Current Flyweight kingpin Figueiredo may not be, however. In a recent Instagram post, Figueiredo expressed a preference for fighting Kara-France instead. Figueiredo argues that Moreno’s team “crossed the line” with racist comments and monkey pictures, and as such, he doesn’t want to reward them with a title fight.

Speaking with ESPN Deportes, Moreno attempted to clear the air on the accusations of racism. Per “The Assassin Baby,” the monkey picture was just an unfortunate result of goofing around with Instagram filters.

“It’s just stupid,” Moreno said in Spanish (via MMAJunkie). “He was playing with his phone and he was streaming live on Instagram and he was using many filters. It’s a shame we don’t have the full video because it was a live stream, he didn’t save it. He was using filters on everyone. Dana White, my teammates and he even used a filter on me. He was switching filters and then appears a monkey filter on Figueiredo, that’s true and someone took a screenshot. We don’t know who, and (he) starts calling Marcelo Rojo a racist. And you know Marcelo, you’re not going to let me lie: He’s not racist.”

Moreno continued on to explain that he thinks Figueiredo sees Kara-France as a “better opportunity” to keep the belt. He’s been told the fourth fight is happening, and Moreno thinks Figueiredo is the only one holding out for anything different.

“I’ve already talked to the UFC, with the top guys in the promotion,” Moreno said. “They told me the fourth fight is set. At some point they told me not to worry. That the plan is for me to fight again for the title. So I think at this point Deiveson is running away from me. I’m not lying. UFC wants Deiveson Figueiredo vs. Brandon Moreno 4. I’ve said yes already, but the other part hasn’t.”

It’s official: UFC is returning to Singapore for the first time since October 2019, when Demian Maia choked out Ben Askren in the main event.

Is there a fighter more unintentionally hilarious than Tito Ortiz?

Another source of comedy: the official UFC rankings! Check out the latest update HERE!

Manon Fioret is ranked below Jennifer Maia. She beat her Saturday.

Based on this preview clip, it looks like Kamaru Usman is helping Gilbert Burns prepare for Khamzat Chimaev — that’s pretty respectable from both men.

Actor Angus Cloud — aka Fez on HBO’s popular drama Euphoria — has been identified as an extended member of the Diaz family.

I am among the small group of fight fans who would still be pretty pumped if Luke Rockhold announced a fight.

As a community, we’ve talked plenty about Rodtang vs. Demetrious Johnson, but don’t miss out on the actual best fight from ONE X.

Kickboxing Fight Of The Year Contender

Day14: 7-6 Endō (L) who can’t seem to get KK the last two days vs 6-7 komusubi Hōshōryū, who wants to stave off MK here. Not the most exciting bout today, but you can’t have everything. #harubasho2022 pic.twitter.com/5jH3uGA75w

Day14: Abi (R) vs stompin’ Hokutōfuji who can get KK. After a stellar first half Abi lost 4 in a row before winning vs Endō ystrdy. He’s got two more chances to get a KK on his sekiwake debut. I bet HTF will stay away from newfound belt skills this bout. #harubasho2022 pic.twitter.com/EkT564UdY5

Got caught trying to circle away with his hands low …