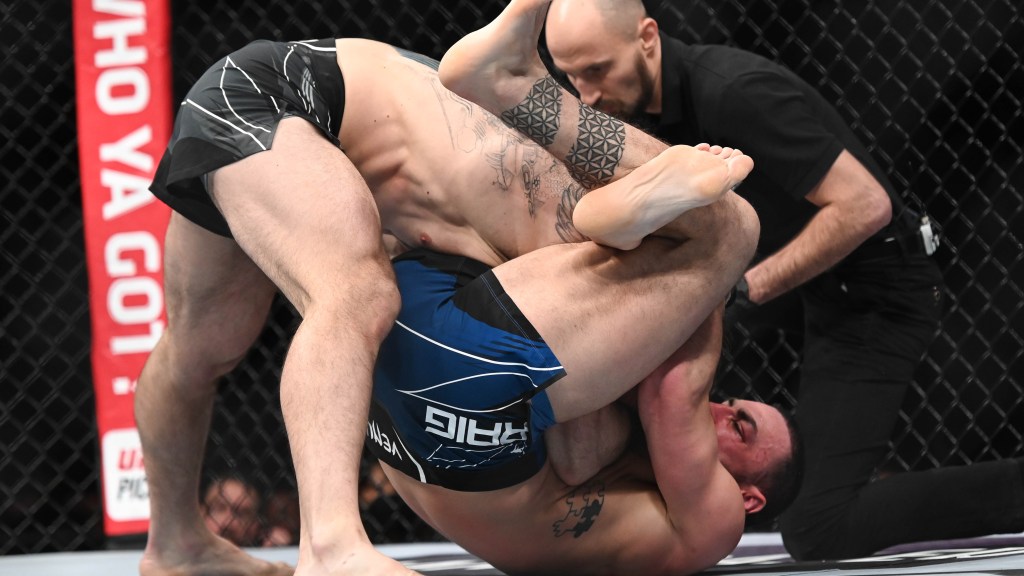 With another action-packed month of MMA in the books, MMA Junkie looks at the best submissions from March 2022: Here are the five nominees, listed in chronological order, and the winner of MMA Junkie’s Submission of the Month award for March.

Umar Nurmagomedov (14-0 MMA, 2-0 UFC) has been touted by many as the heir apparent to Khabib in the octagon. He showed another reason why he’s getting that hype with a dominant win over Brian Kelleher (24-13 MMA, 8-6 UFC).

Nurmagomedov made light work of Kelleher in their featherweight bout, securing a rear-naked choke for the finish at the 3:15 mark of Round 1.

Both Mokaev and Durden started hot in a high-paced bout. Shortly after the fight started, Mokaev connected a knee on Durden, dropped him, then quickly locked a guillotine and finished the fight shortly after. The official stoppage came at the 0:58 mark of Round 1.

Paul Craig (16-4-1 MMA, 8-4-1 UFC) once again made good on his habit of pulling off come-from-behind finishes when he rallied to put the clamp on Nikita Krylov (26-9 MMA, 8-7 UFC) in their light heavyweight bout.

After Krylov got early top position and started pounding away with heavy strikes, Craig waited for his opening and threw up a triangle choke. Krylov wasn’t going anywhere once the signature technique was locked in, and eventually, Craig forced a tap out of his foe to extend his unbeaten streak to six bouts.

Makwan Amirkhani (13-3 MMA, 2-2 UFC) needed less than a minute to put Mike Grundy (16-8 MMA, 6-6 UFC) to sleep in an absolutely critical career bout for both featherweights.

In a matchup in which both fighters entered on losing skids and highly motivated to get the job done, Amirkhani locked in his patented anaconda choke on Grundy in just 57 seconds. The Finnish fighter took advantage of the first opening, and he wasn’t letting his opponent out from there.

It was a dominant showing by Aspinall. The 28-year-old outworked Volkov in all areas of the game. Early in the round, Aspinall connected on Volkov while also avoiding any big shots coming his way. Aspinall then took Volkov down and landed heavy ground-and-pound to split him open on the side of his head. Volkov got back up, but eventually was taken down again and submitted seconds later with a straight armlock.

Grasso submitted Wood with a rear-naked choke less than four minutes into the opening round of the strawweight bout. Not only was it her first career submission, but it was also her first finish in more than seven years.

Craig did it again at UFC Fight Night 204.

Craig added another brilliant, unexpected submission to his resume when, after taking some extremely heavy shots from his opponent, locked in a slick triangle choke to tap out Krylov in the opening round.

The Scottish fighter has made a career of pulling rabbits out of his hat when it seems like he’s in serious peril. That’s what he did once more against Krylov, and he’s now just one submission shy of tying Glover Teixeira’s all-time divisional record.

After the fight, Craig said it went down exactly as he’d hoped and called for a UFC return to Glasgow in his home country of Scotland this summer.

“What I had to do was allow him to punch me in the face,” Craig said in his post-fight interview with Michael Bisping. “What that did was open him up and I wanted to find that triangle.”