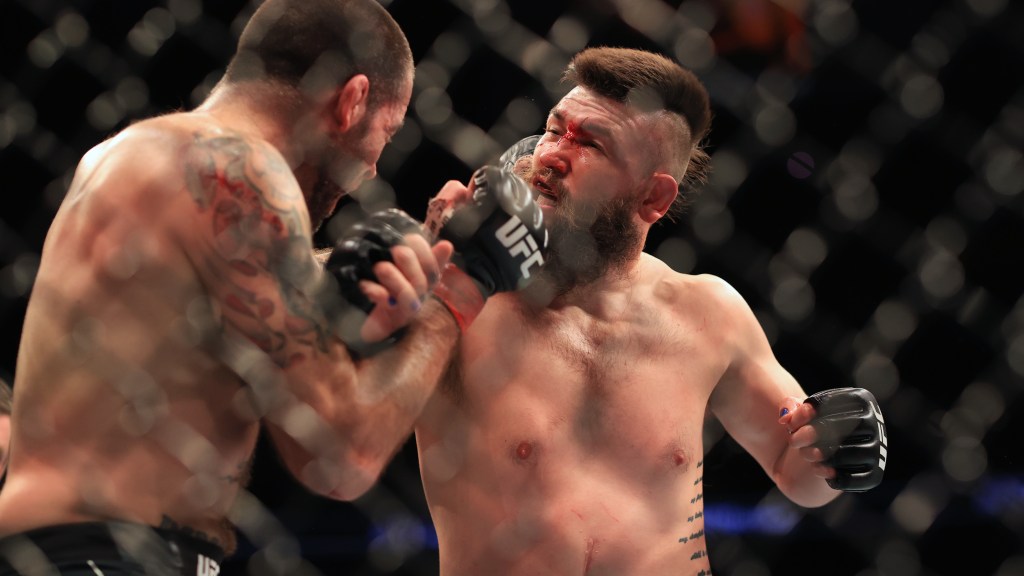 With another action-packed month of MMA in the books, MMA Junkie looks at the best fights from March 2022: Here are the five nominees, listed in chronological order, and winner of MMA Junkie’s Fight of the Month award for March.

Alex Pereira (5-1 MMA, 2-0 UFC) continued his successful run in the UFC with a hard-fought victory over Bruno Silva (22-7 MMA, 3-1 UFC) in their middleweight bout.

The former Glory kickboxing champion picked up his second win under the UFC banner by outpointing Silva in a grueling battle. Pereira defeated Silva via unanimous decision that read 30-27 across all judges’ scorecards.

Terrance McKinney (12-4 MMA, 2-1 UFC) looked like was about to have another quick highlight reel knockout for his resume. However, Drew Dober (24-11 MMA, 11-6 UFC) had other plans.

After McKinney started the lightweight fight with a flurry of strikes and knockdowns, he looked on the verge of his biggest win to date on a 14-day turnaround. Dober hung tough, though, and stormed back to secure the TKO at the 3:17 mark of Round 1.

Borics and Burnell slugged it out for 25 minutes until the final horn sounded. Shortly thereafter, Borics’ hand was raised with a unanimous decision (49-46, 50-45, 49-46) victory.

Motherhood has toughened up Angela Lee (11-2), and it showed against Stamp Fairtex (8-2) in a successful title defense.

In her first fight in two-and-a-half years, Lee showed heart and also reminded ONE Championship why she’s the best atomweight in the world by making Fairtex tap out with a rear-naked choke in the second round to retain her title.

Barberena went tooth-and-nail with Brown over the course of three rounds to win a split decision by scores of 29-28, 28-29, 29-28. It was a spoiler to Brown’s homecoming fight in Ohio, and the crowd was not pleased with the decision as it furiously booed the result while Barberena conducted his post-fight interview.

“You can boo me, but I love you guys,” Barberena told Daniel Cormier after the fight.

To the surprise of no one, the crowd was hot for Brown at the opening bell. He responded by coming out aggressive with all sorts of strikes, cracking Barberena a few times, and putting his opponent on the back foot. Brown switched levels and got a takedown less than two minutes in, and he kept it there for more than a minute. Barberena worked his way up and started to swing, but he couldn’t find the range to be effective. Brown had large control of the striking, landing a hard body kick and a clean short elbow down the stretch.

After some encouragement from his corner between rounds, Barberena came out looking to turn the momentum in the second frame. He looked to throw a big punch, but Brown changed levels again and landed another well-timed takedown. Barberena got up, and shortly after connected with a nasty elbow that badly stunned Brown. “The Immortal” shot for a takedown out of instinct and put Barberena on his back, but he couldn’t keep control and found himself on the bottom instead. Brown got up, but he was wobbly and bloodied on the face. Barberena poured on the strikes, but Brown was tough as nails as he traded punches and elbows as the fight turned into an all-out war.

With the victory hanging in the balance going into the final round, both men came out hungry to get it. Brown landed straight punches while Barberena tried to come around the guard with his hooks. They fought at range and from inside the clinch with elbows. Brown scored a foot sweep takedown, then put grappling pressure on Barberena from the body lock, landing short shots of his own to open up a cut on the nose. They got back into some incredible striking exchanges over the final two minutes, trading and landing big shots from inside the pocket to send the crowd into a frenzy.

The crowd didn’t get the winner it wanted, though, but Barberena was elated to get his hand raised.

“This is absolutely everything I dreamed of fighting Matt Brown,” Barberena said. “That’s everything I wanted. I knew I had to put on a performance.”