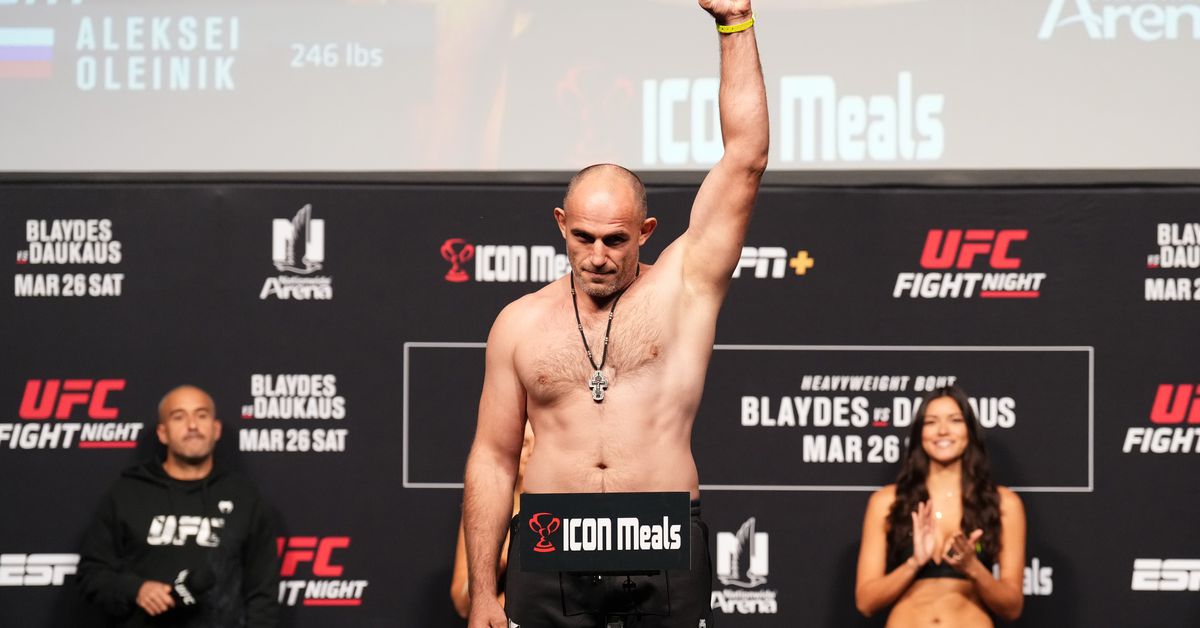 Oleinik was scheduled to throw down vs. Ilir Latifi a couple weeks ago at UFC Columbus, but a last-second illness to Latifi postponed the bout to Saturday night. As a result, that Heavyweight showdown moved from a random “Fight Night” card to a pretty high-profile pay-per-view (PPV) event … and Latifi pulled out again! The end result is a solid opportunity for Vanderaa, who wasn’t scheduled to fight until he jumped on this short-notice booking.

Circumstances aside, both men are in major need of a win here. Oleinik has lost three straight and is generally starting to look his age at 44 years old. Vanderaa, meanwhile, has lost three of four inside the Octagon and is likely on thin ice.

Keys to Victory: Oleinik rallying 20 years into his pro career to pick up some career best wins after 40 is a really incredible story. The funky submission ace found some power in his clubbing hooks, and that dual threat proved pretty effective against even ranked Heavyweights.

Unfortunately, fighting in one’s 40s is hard. Oleinik isn’t as durable nor as well conditioned as he was even five fights ago. He slows down hard when unable to force the early finish, which isn’t rare for Heavyweight, but it’s not improving his odds of success either.

With that problem in mind, prioritizing the early finish seems like Oleinik’s best chance here. Vanderaa is not particularly difficult to hit, and his general wheelhouse of wrestling puts him directly in the realm of Oleinik’s strangles. Therefore, Oleinik would be well-advised to push hard early — for heavy punches, takedowns, or both — and try to force a mistake from his opponent.

Against a man with nearly 80 fights, it only takes one error.

Keys to Victory: Vanderaa is still trying to establish his footing inside the Octagon. He’s at his best when able to trip his opponent from the clinch and drop bombs, but more often, he’s found himself in bottom position against superior wrestlers.

There are two clear paths to victory against Oleinik at this stage in the game. Athletic fighters can simply try to overwhelm him off the bat — it’s working more and more often, and Vanderaa does hit hard. Alternatively, there’s something more akin to Sergei Spivac’s strategy, which involved not getting submitted or knocked out for five minutes, then beating up a tired old man.

Though viewers around the globe are unlikely to be thrilled, the second path seems really safe. Vanderaa merely has to spend five or so minutes muscling his opponent around in the clinch — careful of that pesky Ezekiel choked the whole time — and then he’s dealing with a far lesser threat.

Once Oleinik is gassed, Vanderaa can find easier success with wrestling and kickboxing alike.

Both men have their backs to the wall.

Oleinik is probably done inside the Octagon with another defeat here. I don’t feel happy writing that, but what are the odds UFC keeps a man his age around after four straight defeats? Oleinik’s unlikely run had to end eventually, and this could be his last dance. On the flip side, victory affords him the opportunity to retire in the win column or get at least one more fight booked.

Vanderaa’s situation is less clear. He did UFC a favor by taking this fight on short-notice, but the promotion doesn’t always take that into consideration, and he’s already lost two in a row. Blowing Oleinik out of the water would help erase the memory of those defeats and really establish him at Heavyweight, but another loss could end his current run.