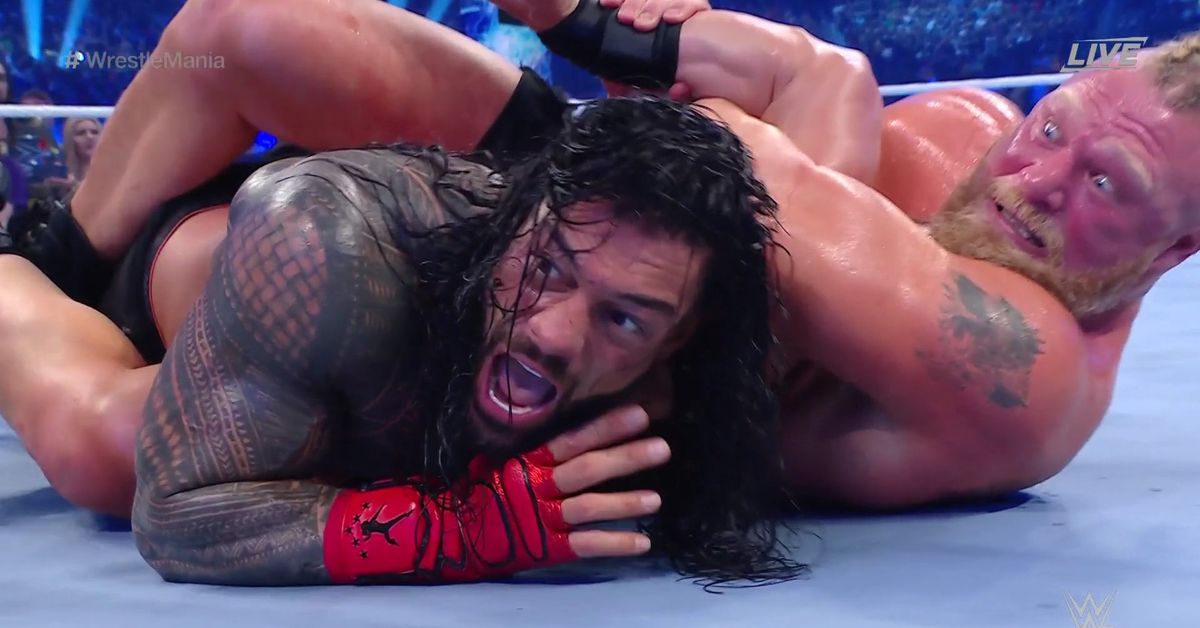 Brock Lesnar left WrestleMania 38 on Sunday night without a WWE championship after falling to Roman Reigns in the main event from AT&T Stadium outside Dallas.

The one-time UFC heavyweight champion was headlining the two-night event in the final match of the weekend that saw Lesnar going up against Reigns (real name Leati Joseph ”Joe” Anoaʻi) following a long feud built up on WWE television for the past several months.

Lesnar, who returned to WWE in August 2021 after leaving the promotion more than a year earlier, as his stints in professional wrestling have typically come in spurts over the last few years.

While Lesnar had previously flirted with a potential return to the UFC as he conducted contract negotiations with the WWE, the 44-year-old heavyweight abandoned all those plans while turning his full focus on pro wrestling and putting combat sports behind him for good.

At WrestleMania, Lesnar was still as shredded as ever as he largely engaged in a match filled with big spots while only actually doing three or four moves in total while exchanging blows with Reigns. Lesnar launched Reigns several times with his signature German suplex and he even hit his finishing maneuver called the F5 but that didn’t earn him the win.

In a reversal late in the match, Lesnar actually caught Reigns in a kimura, which became one of his primary moves after leaving the UFC and rejoining the WWE roster back in 2012.

Reigns eventually got free of the “submission” before hitting Lesnar with a spear that earned him the victory while also unifying the WWE heavyweight and universal championship.

The match also saw Lesnar by himself with his longtime friend Paul Heyman now aligned with Reigns as part of their ongoing television storyline.

Considering Lesnar was defeated in the WrestleMania main event, it’s possible that his latest run with WWE has once again come to a close as he typically takes time off following a long stretch of consecutive dates with the company. Because Lesnar has been appearing consistently on WWE programming since this past August, he may take another extended break, although there’s no confirmation on his contract or how much time he has left before another potential negotiation.

While Lesnar, ex-UFC champion Ronda Rousey and UFC veteran Shayna Baszler all lost in their matches at WrestleMania, one-time Ultimate Fighter competitor Matt Riddle was victorious in his bout as part of a tag team match alongside Randy Orton earlier in the night.