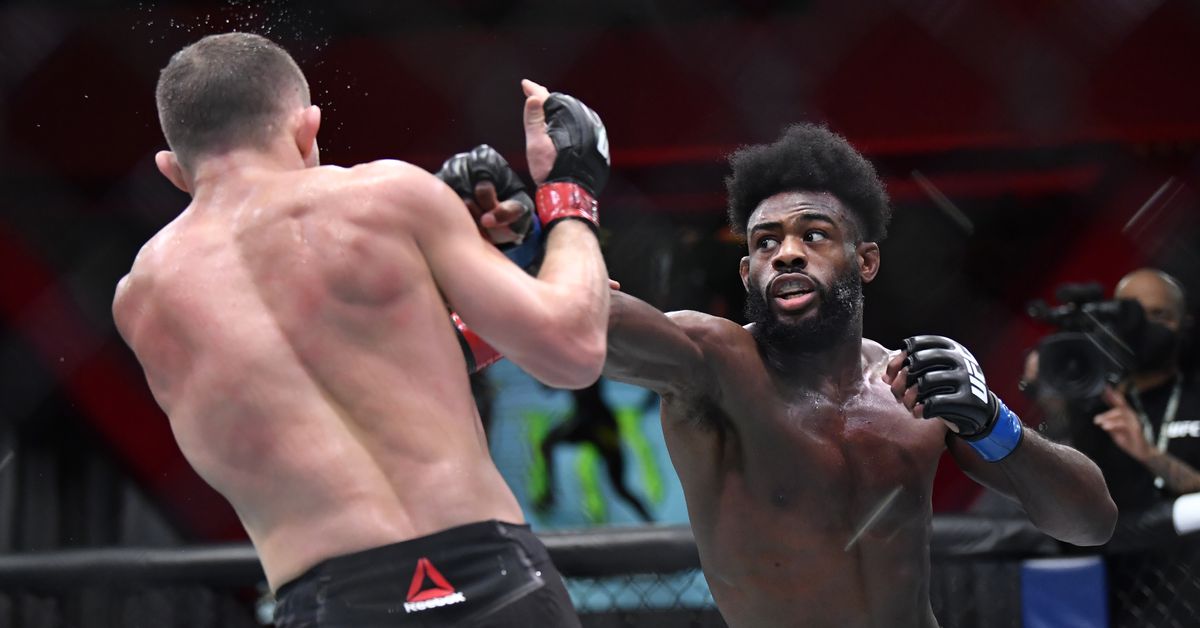 Bad blood, a controversial first fight, a serious stylistic clash — title fights rarely have this many layers of intrigue. In particular, Sterling has a lot to prove. He can protest otherwise, but the first fight really was not going his way, and he seemed incredibly unlikely to walk away with the gold … until Yan threw the dumbest illegal strike in recent memory. Since then, Sterling has been sidelined with an injury (and the official title belt), whereas Yan put on a massively impressive showcase opposite Cory Sandhagen. The pressure is on “Funkmaster,” but that doesn’t mean Yan has an easy task ahead of him.

Let’s take a closer look at the keys to victory for each champion:

I must admit that I kind of hated Sterling’s strategy in the first Yan fight. Against a man with world-class defense and composure, Sterling opted to threw a bunch of s—t at the wall and see what stuck. By and large, his blows landed on Yan’s guard, and he was exhausting himself in the process.

That type of frantic rush is unnecessary and unlikely to payoff. Sterling has to enter this one a bit more measured without sacrificing his variety. In general, Sterling actually did a nice job of attacking different levels, which meant that quite a few body kicks landed hard. Mixing it up is the only way to get through a tight defense like Yan’s, and a bit more tact in choosing how often to attack and what strikes are likely to find openings will make a more effective “Funkmaster.”

The ultimate bottom line here is that Sterling does probably need some takedowns to win this fight, and his wrestling was largely shut down in the first fight. Feints might be the key to changing that, as Sterling cannot shoot into Yan’s shell and expect to finish the takedown. He has to get Yan to swing at him and duck under those shots, which presents his best chance to spin around to the back.

Record: 16-2
Key Wins: Cory Sandhagen (UFC 267), Jose Aldo (UFC 251), Jimmie Rivera (UFC 238), Urijah Faber (UFC 245), John Dodson (UFC Fight Night 145), Douglas Silva de Andrade (UFC 232)
Key Losses: Aljamain Sterling (UFC 259)
Keys to Victory: Yan is quite possibly the best striker in the sport. “No Mercy” keeps such excellent defense while maintaining a brutal pace, and he can put together masterful combinations from either stance or while shifting. That aforementioned composure is so important: Yan knows he can break down opponents, and he never diverts from that strategy.

One errant judge aside, Yan really styled on Sterling in the first fight. He defended his takedowns, blocked most of his strikes, hurt the wrestler several times, and even threw him on his back repeatedly. In short, he was well on his way to a clear-cut win, and really, everything was going correctly for the Russian.

Yan will have to adapt to whatever adjustments Sterling brings to the table, but his typical strategy of pressure and varied combinations still counters Sterling’s strengths well. Really, Yan’s biggest key to victory is likely keeping Sterling off his back in the first three rounds, because “Funkmaster” is a decidedly nasty finisher from that position.

No one is immune to getting choked unconscious.

Sterling deserved the title when Yan cheated at UFC 259, but the unfortunate fact of the matter is that “Funkmaster” still has to prove himself champion to the fans. He’s not looked at as the best Bantamweight in the world, and he won’t be until he settles the controversy and defeats Yan. Aside from all the personal bits, being the first man to truly topple Yan inside the Octagon would be a pretty incredible feat to boot.

As for Yan, losing here would be embarrassing. He’s talked a lot of trash, labeled Sterling a level beneath him, and generally dismissed “Funkmaster.” He may be the favorite to unify the belts, but he still has yet to actually defeat Sterling after all. Victory fully proves Yan as the best 135-pounder on the planet, and it allows Yan to move forward with his career.

At UFC 273, Aljamain Sterling and Petr Yan will rematch in the co-main event. Which man leaves the cage strapped with gold?

Remember that MMAmania.com will deliver LIVE round-by-round, blow-by-blow coverage of the entire UFC 273 fight card right here, starting with the early ESPN+ “Prelims” matches online, which are scheduled to begin at 6:15 p.m. ET, then the remaining undercard balance on ESPN/ESPN+ at 8 p.m. ET, before the PPV main card start time at 10 p.m. ET on ESPN+ PPV.

To check out the latest and greatest UFC 273: “Volkanovski vs. Korean Zombie” news and notes be sure to hit up our comprehensive event archive right here.