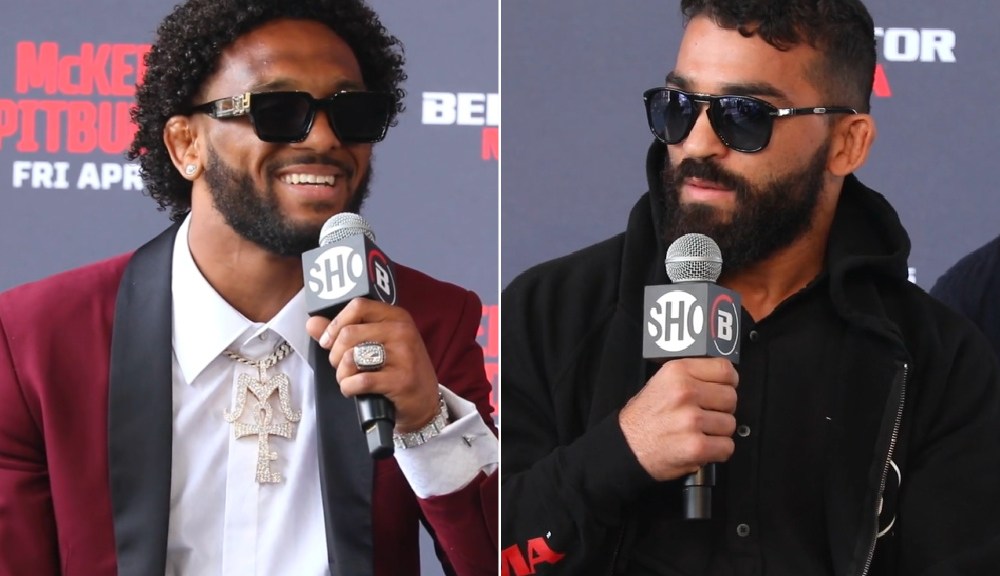 By Simon Samano and Dave Mandel |

McKee, the reigning featherweight champion, and “Pitbull” will run it back Friday in the Bellator 277 main event at SAP Center. But before they head a few hundred miles up the coast to San Jose, the two men were in each other’s presence Monday atop the GRAMMY Museum for a news conference to kick off fight week.

Things were fine – until they weren’t, although it wasn’t so bad.

The last time McKee (18-0 MMA, 18-0 BMMA) and Freire (32-5 MMA, 20-5 BMMA) were in a press conference setting during Bellator 263 fight week, Coker had to restrain them to prevent a brawl from breaking out. This time, it didn’t quite go that far, but it got interesting when Patricio’s brother, lightweight champion Patricky Freire, inserted himself into the conversation as McKee answered a question about his energy being so close to Patricio in a news conference setting for the first time since their scuffle last July.

“I’m gonna put out the same energy when I step in that cage,” McKee said. “Other than that, I’m always respectful, but when you cross that line, you know, that’s the line. Things got to get dealt with. And, yeah, it’s no disrespect – nothing but respect. Obviously things are a little bit different now. I’m the champ, so I like to carry myself a little bit differently. But the first fight was like picking at the brother, you know what I mean? This fight, I’m just looking forward to going out there and putting on a show. I’m looking forward to being champ-champ. His brother’s got the (lightweight) belt. A ‘Pitbull’ is a ‘Pitbull’ to me.”

That got the attention of Patricky, who got into it with McKee while standing behind seven rows of reporters.

“I’ll beat your brother and you again,” McKee told him.

Not to be outdone, Patricio entered the fray. “Hey, the last one who said that, I beat him in one minute,” he said.

If that happened this time, Freire would exact a sweet measure of revenge considering it took McKee just 1:57 to choke him out last July 31 to win the Bellator featherweight grand prix and become champion.

They’ll have another chance to settle their differences Friday.

You can check out their exchange in the video above or watch the full Bellator 277 news conference below.