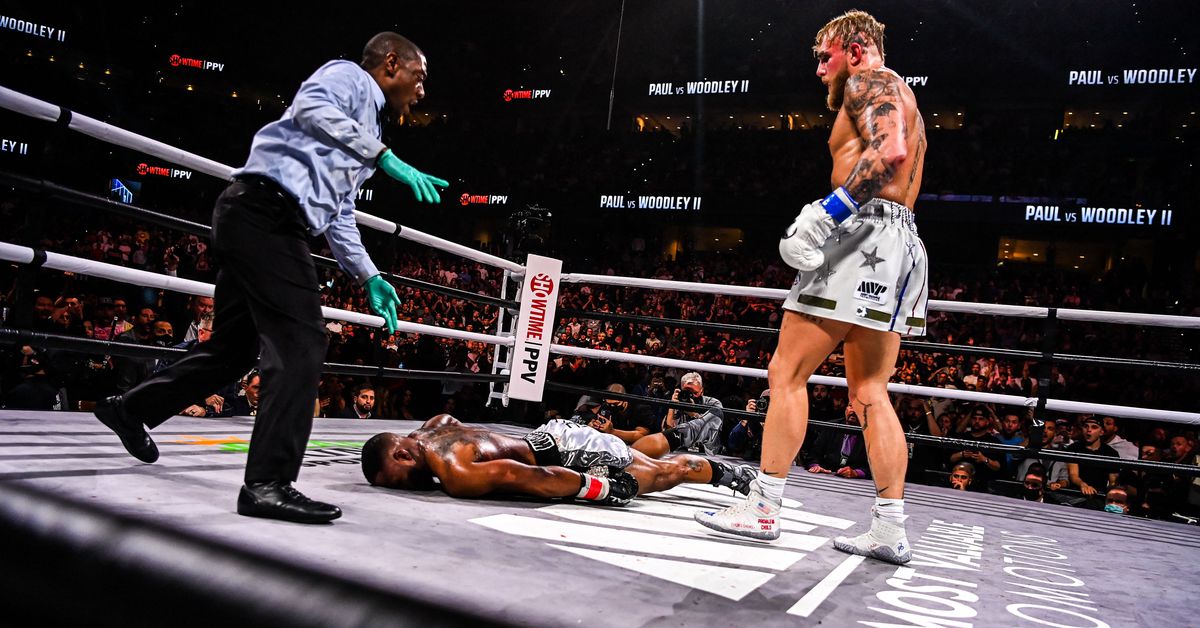 If time machines existed, surely several combat sports fans would use their trip to go back and stop the Paul brothers from running amuck in the boxing world.

For the younger of the two Ohio natives, Jake, he’s taken his boxing career significantly more seriously than his older brother Logan. 5-0 as a professional, “The Problem Child” most recently picked up his biggest win yet when knocking out former Ultimate Fighting Championship (UFC) Welterweight champion, Tyron Woodley in Dec. 2021 (watch highlights).

The match was a rematch of their Aug. 2021 split decision that saw Paul’s hand raised. Originally, Paul was to face Tommy Fury until injury struck and led to Woodley getting the short-notice call — a factor that Joe Rogan believes was a hindrance for “The Chosen One.”

“It would have been a different fight had Tyron had the time to prepare, I guarantee you,” Rogan said his Joe Rogan Experience podcast. “He would have had more conditioning, more confidence to hit the gas. If you don’t have a full camp, you still are in shape, you’re a professional athlete. He’s still a f—king stud of a man. But he doesn’t have the kind of conditioning that you need to go a hard fight. There was no way he was conditioned for that fight.”

Between mixed martial arts (MMA) and boxing, the knockout loss for the 39-year-old Woodley extended his current skid to six straight. His last victory came when successfully defending his title against Darren Till at UFC 228 in Sept. 2018 (watch highlights).

Despite his thoughts on how the match may have played out under normal circumstances, Rogan is still impressed with the tandem of YouTube stars.

“Him and his brother are f—king animals,” Rogan said. “I mean, what they’ve been able to do is incredible. His brother knocked out Tyron Woodley. You understand that? With one punch. He knocked out one of the greatest Welterweight champions of all time with one punch is f—king bonkers.

“See, he’s got the power out of the two of them,” he continued. “Logan is a really good athlete but he’s not as good of a boxer. But Jake Paul on top of being a better boxer, he’s got legit power. Tyron took it on just a few week’s notice. There’s no way he was conditioned for that fight. So when you’re not fully camp conditioned, you take breaks. When you’re in the fight and there’s maybe times you should move then you just go, ‘I gotta take a f—king break here.’ and try to gather up your energy and you manage it over the course of three minutes. You can’t just go out.”

On To the Next One: Matches to make after UFC Austin
Dana White open to Alexander Volkanovski’s request for champ-champ fight: ‘I’m down for whatever he wants’
Jiri Prochazka Realizes Tapping Was ‘Very Dangerous’ at UFC 275 – MMA Fighting
Cat Zingano: Cris Cyborg offer wasn’t on table – but I want to ensure drug testing if it happens
Charles Oliveira will face Islam Makhachev at UFC 281, Islam Makhachev REACTS!