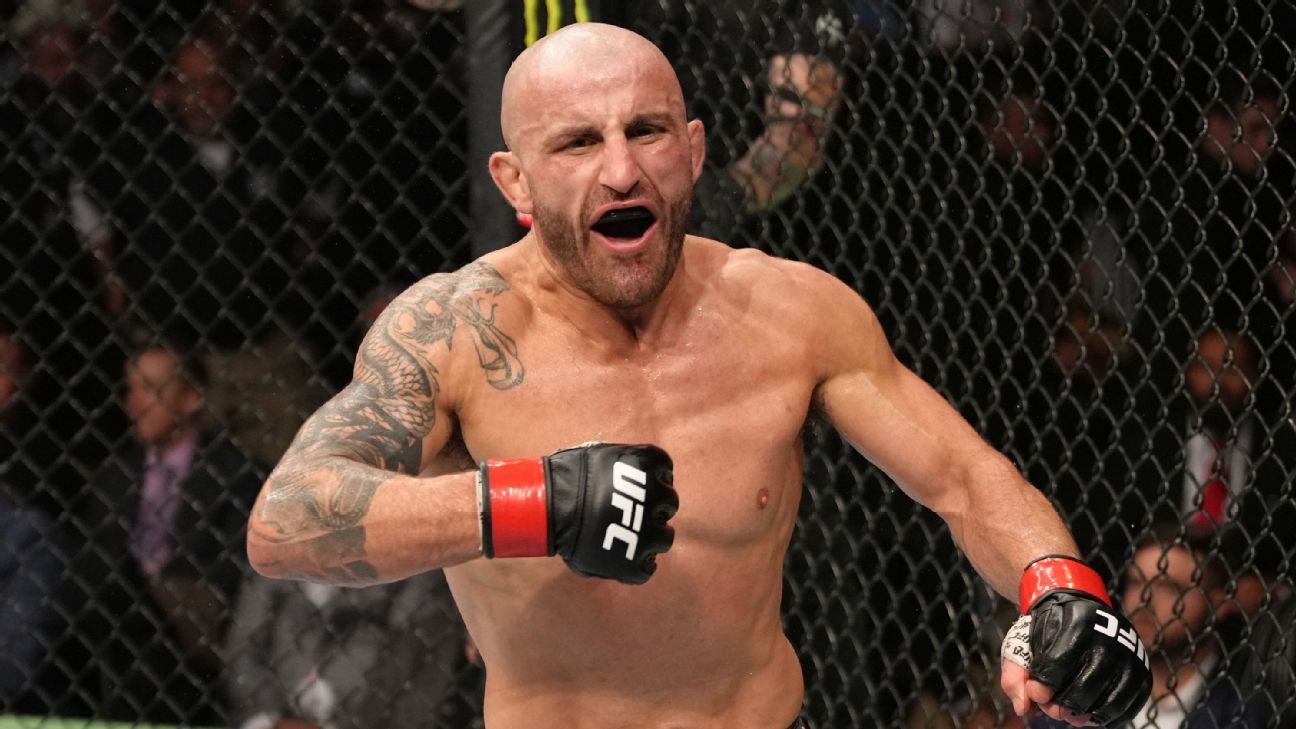 Alexander Volkanovski has welcomed Henry Cejudo’s return to the USADA testing pool, but the Australian says he is instead focused on a shift to lightweight and an immediate crack at becoming a two-division UFC champion.

Fresh off his domination of Chan Sung Jung at UFC 273, Volkanovski is already mapping out his plans for the remainder of 2022 — something Cejudo is unlikely to be a part of, given athletes must typically be subjected to six months of testing before they are eligible to compete.

Still, Volkanovski says he is happy Cejudo is finally walking the walk, and not just the talking the talk, as has been the case on the Australian’s impressive rise to becoming one of the best pound-for-pound fighters in the UFC.

“Well at least he’s [Cejudo] one step closer to committing to backing up what he’s saying because he’s chirping every single time [after I fight],” Volkanovski told ESPN. “How many times have you heard him say things?

“At least now I expect you [the media] to talk to me about it because at least he’s showing some sort of commitment [to making a return]. But that doesn’t mean he has shown a commitment in my division either. Anyone would just come back if they could get a title shot in whatever division they wanted.”

Cejudo directly called out Volkanovski on Twitter on Monday, after manager Ali Abdelaziz had earlier confirmed to ESPN that his client was set to reenter the USADA testing pool.

While he is open to a fight with Cejudo in the future, Volkanovski says the former two-division UFC champion had no right just to come in and expect a shot at the featherweight title when he hadn’t been competing for two years.

“Go out there and still earn that No. 1 spot,” Volkanovski said. “I think he’s in a lot better position than anyone else that’s out of the division to come in and get a title shot. If you go out there and fight one guy, I think you definitely get that title shot, which is still very fair; I feel like it’s still a great opportunity for him.

“But if he’s expecting to just walk into a title shot straight away, that’s pretty ridiculous. Whether he’s in the testing pool to fight bantamweight or featherweight, I don’t know. But if he’s going to go into featherweight, then fight a somebody and I reckon that gives you the No. 1 contender spot just like that.”

While Max Holloway — the American who was Volkanovski’s original opponent at UFC 273 — appears likely to be the Australian’s next opponent, the champion is seemingly more motivated by another challenge.

That comes at lightweight, where he sees himself as immediately deserving of a title shot.

I know I could beat @alexvolkanovski. I want to become the 1st 3-division champion in UFC history. Or, he could shut up the cringe. It would be a treat for fans.

“I want that this year. That’s something I’m looking at next, even,” he told ESPN. “As I said, while this division [featherweight] is sorting itself out; I’m doing my part, I don’t want to hold up any divisions. But if this division is getting held up it’s because the contenders aren’t taking that No. 1 spot. It’s got nothing to do with me.

“So if [they’re] going to do that, I want to be active, I’ll move up, I’ll work my options because I’m not holding anyone up and I’m doing my part. So if people don’t want to do their part, let’s have fun, let’s have these money fights, let’s have these double-champ status [fights], let’s do all that type of stuff while that’s happening. And I think I’m in a good position and a fair position to call for a double-champ status.”

When asked whether he was wrong to say Cejudo should work his way up to a title shot and then expect one immediately at lightweight himself, Volkanovski pointed to the fact he had been fighting nonstop since first entering the UFC in 2016.

“He’s never fought in the division for one, and he’s retired … so that’s why I’m saying that I feel like he needs to do something [first]. If he was still bantamweight champ and had a couple of defences, then all right, now he’s got some pull. Now he’s got something behind that, there’s a lot of weight behind that.

“Whereas I’m in a position that I’ve taken out the GOATs [Jose Aldo and Holloway], I’m going out there and absolutely dominating these guys, four title fights, three defences, I’m not holding the division up.

“Now I haven’t called for this until now; you didn’t see me demand it [after the win over Jung] and I’m not demanding it now, but you haven’t really seen me call for it until now, that just shows you the type of guy I am. And there’s truth to what I’m saying about Henry Cejudo; he’s got to earn it.

“But I feel like I’m in the position where I’ve earned a shot at that lightweight [title], so right now I’m going to call for it. That’s where we’re at right now.”

Asked if he’d be willing to fight the winner of Charles Oliveira vs. Justin Gaethje, the lightweight title showdown that is set for UFC 274 next month, later this year, Volkanovski said he’d be ready to go.

“August sounds great, and in Australia sounds great, too,” he told ESPN. “I know Dana [White] isn’t too sure about it [fighting in Australia] but we’ll have these conversations and see what we can do. Because I feel like there wouldn’t be [many] hurdles to having it in Australia.

“They still want to know what the country’s about [COVID restrictions] so we’ll have those conversations and see what we can do, because I need to defend my felt in Australia ASAP.

“I want my next fight in Australia and I think that we deserve it.”