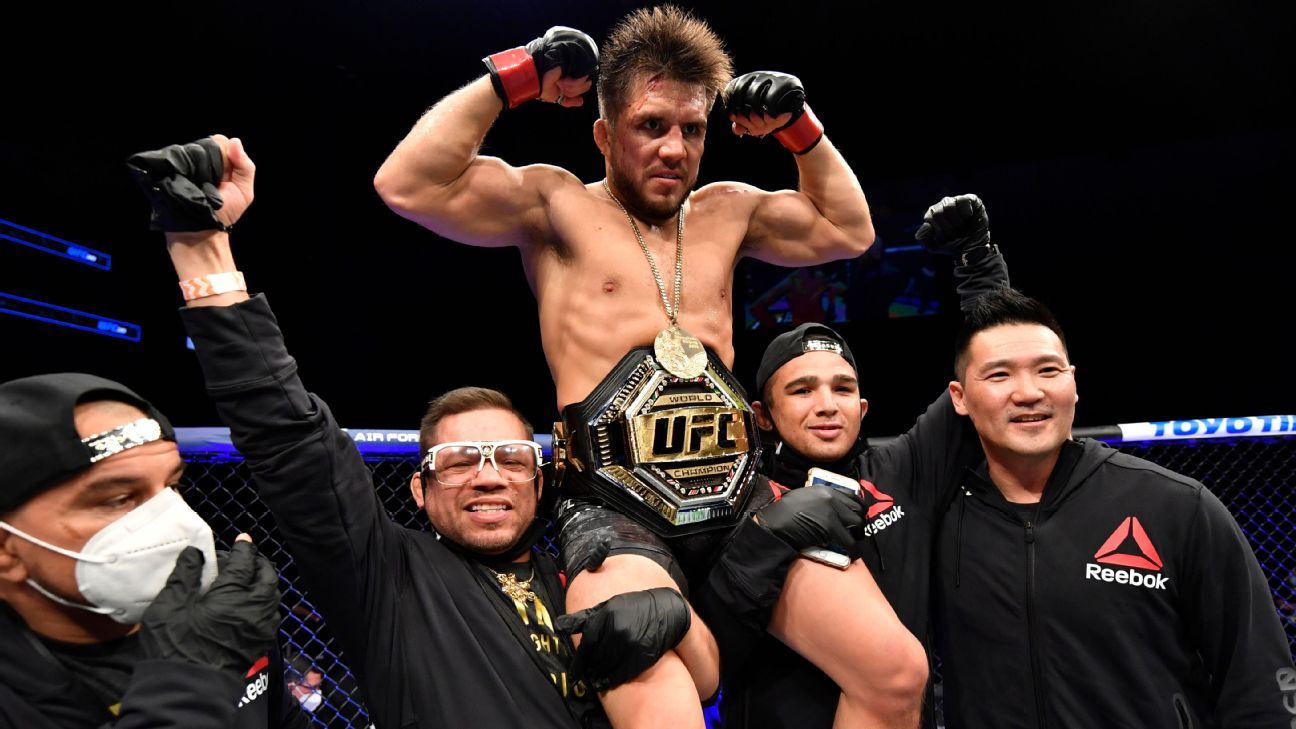 One of the only double champions in UFC history seems on his way back to the Octagon.

Henry Cejudo will re-enter himself into the USADA drug-testing pool Monday, his manager Ali Abdelaziz of Dominance MMA told ESPN on Sunday. That signifies that Cejudo, a former Olympic gold medalist in wrestling, is on his way out of retirement after two years.

Fighters re-entering the pool are typically subjected to six months of drug testing before being able to compete again, per the UFC’s anti-doping policy.

After the fights Saturday night, Cejudo tweeted, “I’m getting back in the pool!!” Now, the comeback appears to be on.

“Henry will focus on his fight and training,” Abdelaziz said. “He never stopped training. I truly believe Henry can come back to win the 135 [bantamweight] title and go up to 145 [featherweight] and win that. He will be the only fighter in UFC history to win three world titles.”

Cejudo, 35, surprisingly announced his retirement in his postfight interview after beating Dominick Cruz to retain the bantamweight title at UFC 249 on May 9, 2020. The Arizona resident was on a six-fight winning streak prior to hanging up the gloves and was considered one of the best pound-for-pound fighters in the world.

Cejudo relinquished the UFC bantamweight title May 24, 2020. Since stepping away from the cage, Cejudo has focused on coaching at Fight Ready in Scottsdale, working with the likes of current and former MMA champions Deiveson Figueiredo, Jon Jones, Cris Cyborg, Zhang Weili, Jiri Prochazka and more.

@alexvolkanovski you’ve inspired me to come back. When it comes to wrestling…you couldn’t pin a tweet. I would take you down and choke you out quicker than a McGregor relapse. Sign the contract. https://t.co/3gX1oI1bNO

On Sunday night, Cejudo was already calling out Volkanovski on social media. “You’ve inspired me to come back,” Cejudo tweeted. “When it comes to wrestling…you couldn’t pin a tweet. … Sign the contract.”

Rise of Shavkat Rakhmonov
Michael Bisping: Conor McGregor had a crazy run, but doesn’t go down as one of the featherweight greats
Quote: Jon Jones Couldn’t Tie The Shoes Of Khabib Nurmagomedov
Cerrone agrees to fight Miller in UFC 276 bout
Dana White open to Alexander Volkanovski’s request for champ-champ fight: ‘I’m down for whatever he wants’