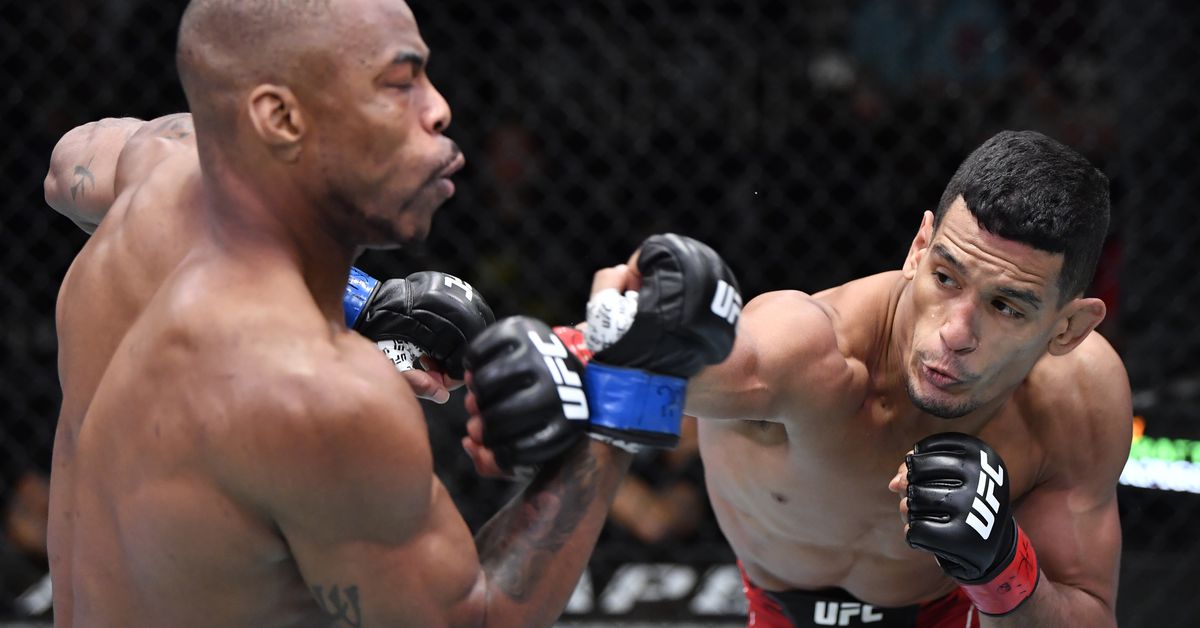 This weekend (Sat., April 16, 2022), Ultimate Fighting Championship (UFC) will return to Las Vegas, Nevada and the UFC Apex for UFC Vegas 51. I won’t lie to my readers: this is a bleak card, particularly after a high-profile pay-per-view (PPV) weekend. There’s no substantial jump in quality from the preliminary portion of the event to the main card, but there are at least a couple noteworthy names here that promise some action.

Let’s take a closer look at these main card donnybrooks:

Best Win for Borralho? Aaron Jeffrey For Omargadzhiev? Vladimir Vasilyev
Current Streak: Borralho has won ten in a row ahead of his UFC debut, whereas Omargadzhiev is 13-0
X-Factor: Potential Octagon jitters for the debutantes
How these two match up: These may be unfamiliar names to most, but this is a quality fight.

Both athletes ride into their promotional debuts with considerable momentum behind them. Interestingly enough, there are a number of similarities here: experience level, quality of competition, and general fight strategy, which typically involves gaining top position and dropping the hurt.

Therefore, who wins the wrestling battle is an important question. Between the two, Omargazhiev seems like the more technical wrestler, but Borralho is the stronger man. Plus, that win over CFFC champ Jeffrey is the most significant victory between them, a real feather in his cap.

Likely, this ends up a closely contested grappling match with some prolonged exchanges along the fence. Ultimately, I think Borralho is a bit more active and effective in the latter half of the fight, resulting in a tight decision win.

Best Win for Baeza? Matt Brown For Fialho? James Vick
Current Streak: Baeza has lost two in a row, whereas Fialho recently came up short in his UFC debut
X-Factor: Baeza’s brutal calf kicks
How these two match up: This will be a lot of fun!

Baeza burst onto the scene with three straight finishes, looking very much like a future contender on the strength of his fluid kickboxing and slick grappling. Since then, opponents have started to figure out his kick-heavy approach, resulting in a pair of losses that have stalled his climb.

Fialho, meanwhile, took a short-notice debut vs. Michel Pereira and gave a good account of himself in a loss. The Portuguese athlete pushes a solid pace and has very functional Muay Thai skills, and he also has a wealth of high-level experience.

Despite the recent adversity, I still like the upside on Baeza. Those low kicks are absolutely brutal, but they’re far from his only weapon. His counter punching is slick, and his grappling is an underrated option for when opponents try to pressure through his kicks. Really, the 29-year-old “Caramel Thunder” just has to connect these pieces to find major success inside the Octagon.

Fialho is a solid fighter, but he presents a fairly straightforward threat that Baeza should be able to dissect.

Best Win for Silva? Gillian Robertson For Wu? Lauren Mueller
Current Streak: Silva came up short last time out, while Wu has lost two in a row
X-Factor: Silva is moving up to Bantamweight for the first time since 2018
How these two match up: Here’s a classic grappler vs. striker battle.

Silva definitely occupies the role of grappler. She’s a jiu-jitsu specialist with a nasty armbar, capable of securing the tap from top or bottom position. Her kickboxing and wrestling are far more middle of the pack, however. While Silva has proven herself a high-level grappler by Octagon standards, Wu has yet to really thrive in any one area. She’s a striker who can put forth a high-volume of shots, but she’s also been picked apart and outwrestled in her trio of UFC defeats.

Wu’s path to victory does exist in the form of a sprawl-and-brawl decision win full of 1-2s down the middle, but it seems unlikely. Unless Silva is severely smaller and completely unable to implement her wrestling — which is possible, but Wu has fought at Flyweight before as well — she’s likely to dominate from top position.

If nothing else, Silva might just be able to pull guard and snatch an arm.

Best Win for Sabatini? Jamall Emmers For Laramie? Daniel Swain
Current Streak: Sabatini has begun his UFC career 3-0, where Laramie lost his UFC debut in 2020
X-Factor: Sabatini’s opportunistic submission skills
How these two match up: Hopefully, this scrap will feature some fun scrambles!

Sabatini is one of Featherweight’s top recent pickups, a CFFC champ with plus ground skills. His kickboxing is definitely developed, but Sabatini really excels at chain wrestling, advancing position on the mat, then locking in something unpleasant. Laramie is a ground specialist as well, but he has yet to really show off those skills due to a Darrick Minner guillotine early in his UFC debut. The Canadian talent does have some power in his hands as well, which is likely his best path to victory vs. Sabatini.

Admittedly, I’m not quite sure why this match up was made. Sabatini deserves a step up in competition, and I happen to have insider info that Andre Fili accepted a fight vs. Sabatini — there’s a match up that would’ve made sense!

All the same, Sabatini likely keeps building momentum here. His wrestling and top control are likely to lock Laramie in bottom position for long periods of time. Laramie is good enough to avoid getting submitted, but defense alone rarely scores decision nods.

Best Win for Lazzez? Abdul Razak Alhassan For Loosa? John Howard
Current Streak: Lazzez lost his last bout, while Loosa debuts on a single-fight win streak
X-Factor: Loosa only found out he was fighting a couple days ago!
How these two match up: This should be another fun kickboxing battle.

Lazzez really impressed in his UFC debut, showcasing composure and craft in the face of major power. Unfortunately, a similar barrage of strikes ended him early last time out, so it’s not yet clear exactly where “The Sniper” stands. Meanwhile, Loosa deserves props for accepting this fight on less than a week’s notice! “The Last Ninja” isn’t completely unaccustomed to this level of competition fortunately, as he’s appeared on “Contenders Series” previously and recently defeated UFC veteran John Howard.

Lazzez’s debut was really awesome, as he demonstrated far more kickboxing craft than one would expect from a random replacement. He showed great tricks in the clinch as well as smart combinations at distance, and the 34-year-old veteran looked like a complete package.

Getting smashed by Warlley Alves in short order hurt his standing, but it’s hard not to favor him vs. a short-notice foe here. Lazzez is defensively responsible and can push a solid pace — two bad traits for an opponent likely in need of a quick finish.

Instead, Lazzez maintains his distance and picks apart Loosa.