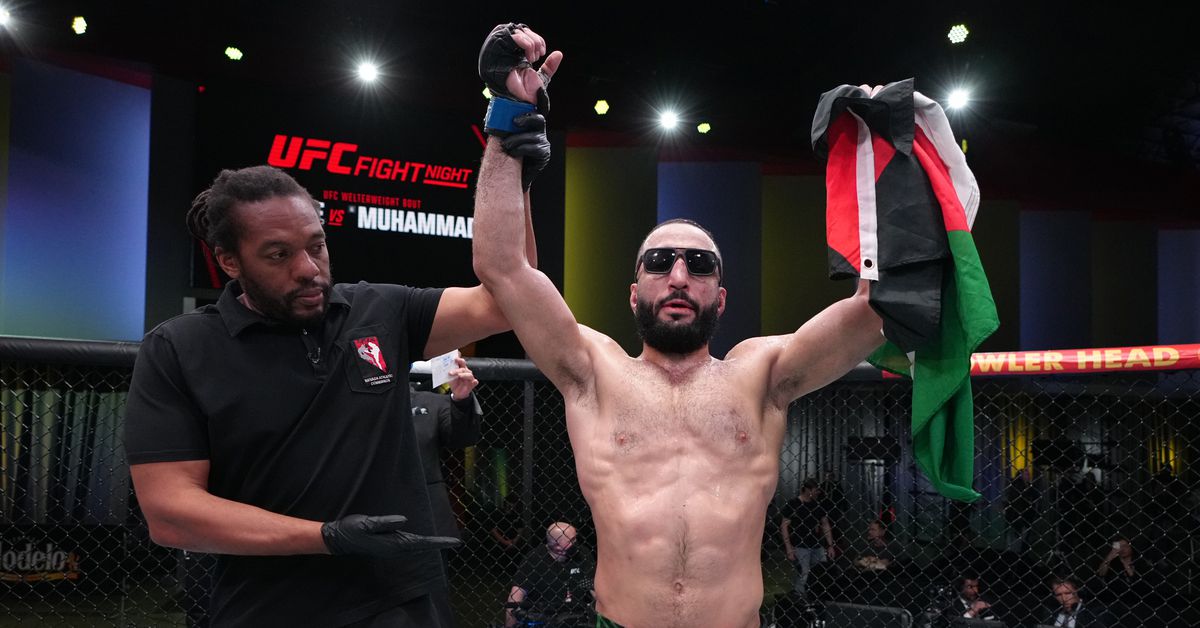 Belal Muhammad extended his unbeaten streak to eight consecutive fights with his unanimous decision win over Vicente Luque in UFC Vegas 51’s main event, but he still has no illusions that he’ll receive the next title shot in the welterweight division.

As of now, Leon Edwards is expected to face reigning champion Kamaru Usman later this year, although no date has been determined and no contracts have been issued nor signed. Still, UFC President Dana White has stated emphatically that Edwards deserves the next shot at Usman. Muhammad doesn’t understand the logic behind that choice.

“I don’t think [Edwards] deserves to fight for the title,” Muhammad said at the UFC Vegas 51 post-fight press conference. “I think that I do. I think he got that Dana White privilege. But whatever, I don’t expect to be handed anything. I have to fight for everything I’ve got and I’m willing to keep doing it.”

Muhammad has past experience with Edwards. They met in a main event fight in March 2021 after Muhammad accepted the opportunity on short notice.

The battle ended when an eye poke delivered by Edwards left Muhammad unable to continue, which resulted in the bout being declared a no contest. Muhammad pushed for an immediate rematch, but the UFC opted to go in a different direction, with Edwards eventually picking up a win over Nate Diaz to solidify his position as the No. 1 contender in the division.

While Edwards’ undefeated run dates back six years and 10 fights, Muhammad scoffs at his overall résumé, especially when examining the number of ranked welterweights in the win column.

“Who’s the only one in the division with a better run than I am on?” Muhammad said. “I’m literally fighting [Demian] Maia, ‘Wonderboy’ [Stephen Thompson], Luque. Who’s Colby [Covington] fighting? Colby’s fighting guys off two losses in a row. Who’s Leon fighting? Leon’s fighting [155 pounders].

Immediately after his win, Muhammad called for a fight against Colby Covington, who hasn’t been officially booked since beating Jorge Masvidal by unanimous decision back in March.

All signs are pointing towards the UFC attempting to book Covington against undefeated welterweight Khamzat Chimaev in his next outing, although nothing has been confirmed on that front.

In a perfect world, Muhammad would love to draw one of those names as his next opponent, because he knows deep down that Edwards just isn’t going to be an option.

“I feel like there’s a lot of guys above me that don’t have fights,” Muhammad said. “Honestly, I don’t even think Leon has a fight. They’re saying Usman but I just don’t think Usman’s ready for that yet [because of his hand surgery]. Unless Leon’s going to wait all the way until September, October, it just doesn’t make sense.

“I think that fight would make sense, but you guys are going to post the headline, ‘He wants to fight Leon,’ and then the fans are going to [say], ‘Oh, he’s such a crybaby, poke in the eye.’ I don’t want to call him out cause I don’t want to offend anybody. Like I said, the two best guys that are above me that are winning right now are Khamzat and Colby, and neither one of them have fights.”

As far as timing goes, Muhammad would like to stay busy, although there are many options available to him right now at the top of the welterweight division.

Perhaps more important than anything else is the chance to compete on the same event as Usman when the champ gets scheduled to face Edwards, because Muhammad believes that might be his best opportunity to compete for UFC gold sooner rather than later.

“If title fight’s going to happen in July, I want to be on that card,” Muhammad explained. “With Leon’s luck — his fights get cancelled every other day — I would assume that something will happen where he’ll trip on a wire or something and I’ll step in and fight Usman.”