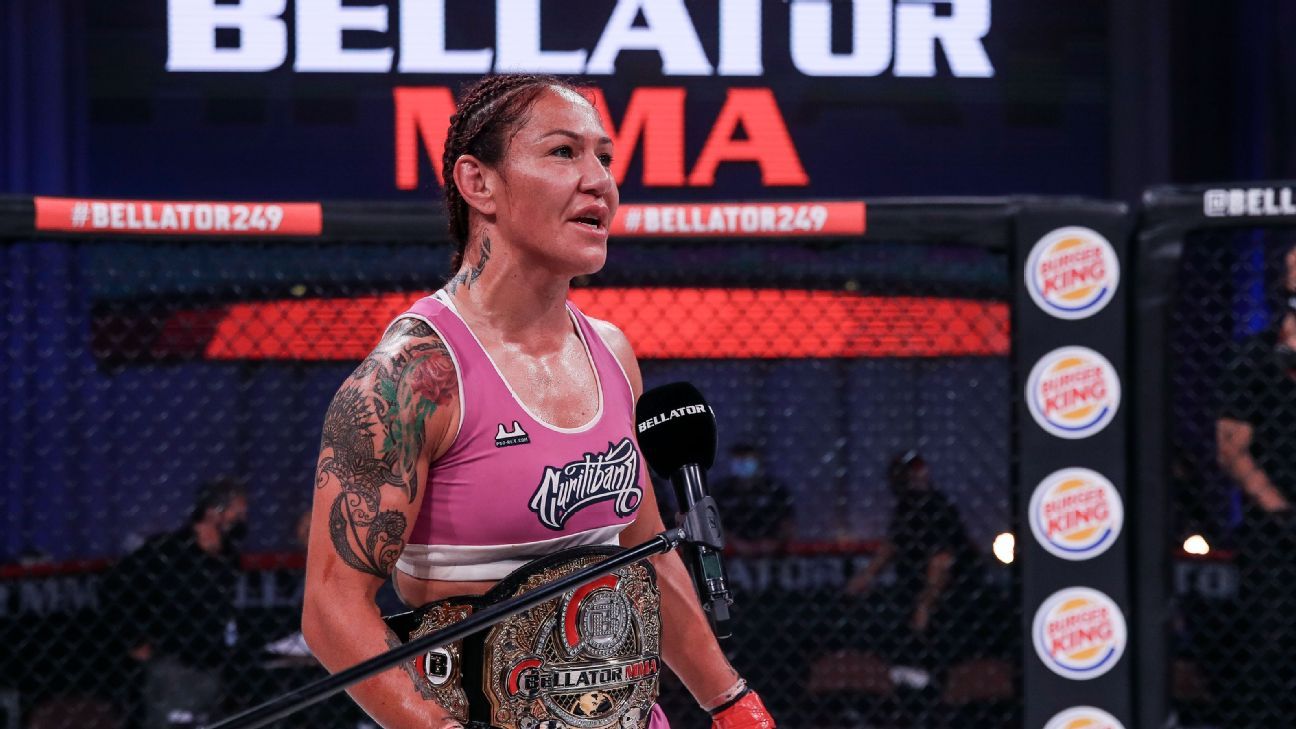 Cris Cyborg couldn’t help but smile as she heard her many accomplishments in MMA listed back to her.

The Brazilian knockout artist has been a UFC champion, a Strikeforce champion and an Invicta FC champion. In 2020, she won the Bellator women’s featherweight title, making her the first fighter in mixed martial arts history to win gold in four major promotions.

Belts and accolades aside, Cyborg is most proud of her longevity and consistency. This is her 17th year as a professional MMA fighter and she has lost just twice, once in her pro debut and once to Amanda Nunes. She’s quick to point out that this was never her intended path — she was a handball player in her native Brazil — but she took to Muay Thai and then MMA, vowing to be the best inside the cage.

Fast-forward nearly two decades and Cyborg, whose real name is Cristiane Justino, is one of the greatest female combat sports athletes ever. And she’s not done yet. On Saturday, Cyborg will defend her Bellator title against Arlene Blencowe in the main event of Bellator 279 in Honolulu. If she wins, Cyborg will have defended her belt four straight times, which would tie Ben Askren‘s record for most consecutive title defenses in Bellator history.

“I don’t feel in my heart yet about retirement,” Cyborg told ESPN. “It’s gonna be 17 years, and maybe I can do 20 years. But I don’t know. Only God knows how I’m gonna feel. But I feel great.

Cyborg, 36, already owns a win over Blencowe, a second-round submission at Bellator 249 in October 2020. That was the first submission win of Cyborg’s career. Cyborg is a heavy favorite this weekend — some sportsbooks have her at -1000 — which is one of the reasons there is more buzz about who she could fight in the future than who she is fighting currently.

Cyborg will be a free agent at some point this summer. PFL is likely to make a run at her to put together a match between Cyborg and two-time PFL women’s lightweight champion Kayla Harrison. Even if Cyborg re-signs with Bellator, PFL has made it clear it will try to do a co-promotional fight with Bellator to make Cyborg vs. Harrison happen. If that’s what Bellator president Scott Coker wants, Cyborg said, she’ll do it.

“I don’t choose opponents,” she said. “If you tell me, ‘You’re gonna fight this girl,’ I’m gonna be ready and we’re gonna fight.”

ESPN ranks Cyborg No. 4 in its women’s pound-for-pound rankings while Harrison is tied for seventh.

“The first time I started fighting, I was thinking in my mind I wanted to be the best in the world,” Cyborg said. “But it’s not something I was born to do. I had to learn every day and be humble to learn every day.”

Let’s break down those three other women’s fights this weekend and what’s at stake.

Andrade was the UFC strawweight champion in 2019, beating Rose Namajunas for the belt before dropping it to Zhang Weili. After falling to Namajunas in a nontitle bout in July 2020, Andrade moved up to flyweight. She went 2-1 at 125 pounds, with her lone loss coming in a title fight against champion Valentina Shevchenko. Andrade is now back at strawweight, where she owns the record for most knockouts in division history (three). The 30-year-old Brazilian is the only woman in UFC history to fight in three weight classes. ESPN ranks Andrade No. 3 at flyweight.

Meanwhile, Lemos has won five straight since moving down to strawweight from bantamweight. The 34-year-old Brazilian is coming off a Fight of the Night performance against Angela Hill last December, a split-decision victory. But Lemos is a finisher with three stoppage victories during this current streak. ESPN ranks Lemos No. 9 at strawweight.

What’s at stake: Holding ground in a very competitive strawweight hierarchy. A win wouldn’t likely earn a title shot, but potentially a title eliminator. Namajunas is defending against Carla Esparza at UFC 274 on May 7. Marina Rodriguez and Mackenzie Dern are in the contender conversation. And then there’s that rematch between Zhang and Joanna Jedrzejczyk coming up. Add this fight to the mix and it’s set to be a fun year at 115 pounds in the UFC. 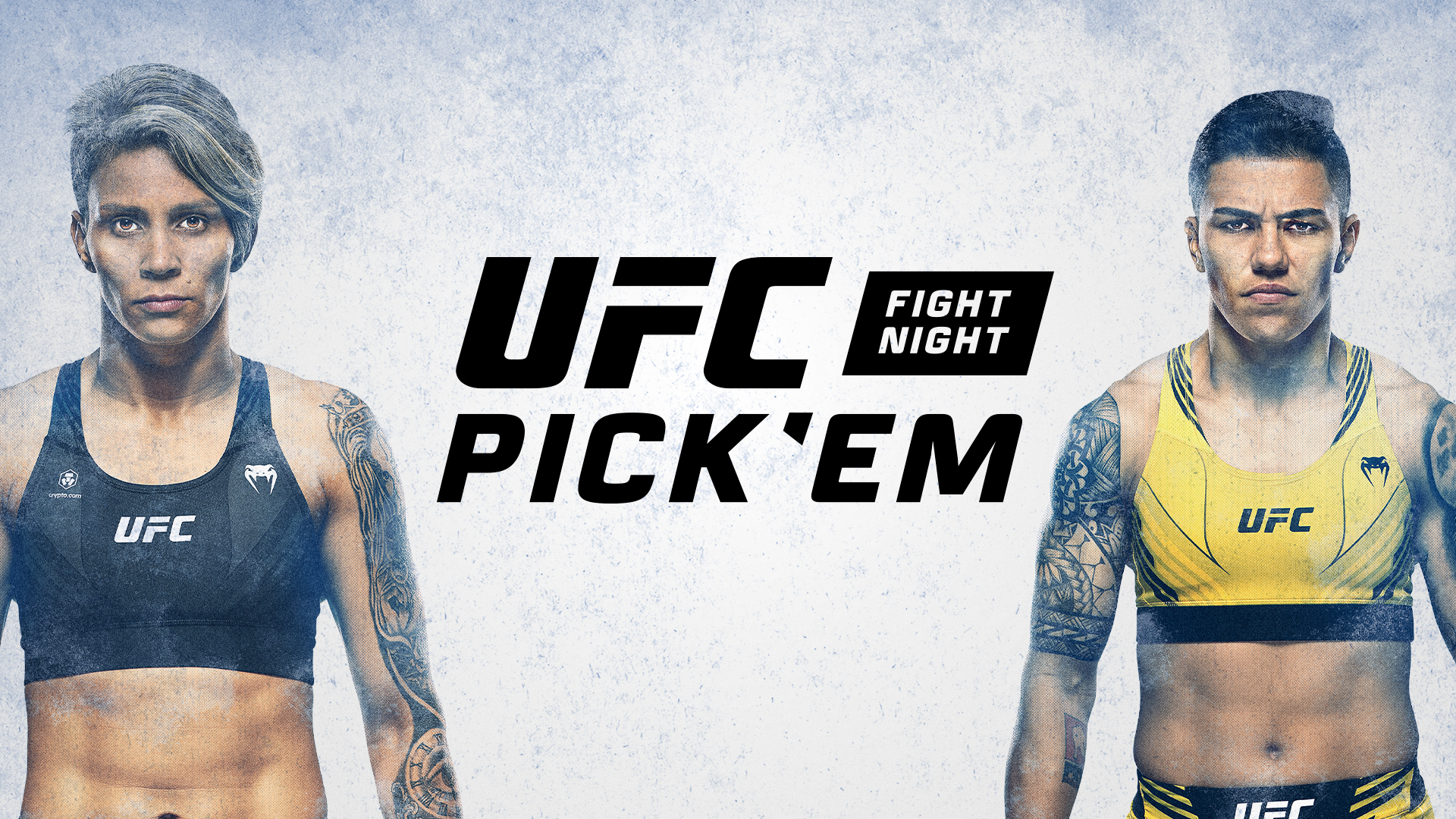 Play for a chance to win a streaming of UFC 274 for FREE! Make Your Picks

Velasquez won the title from the division’s first champion, Ilima-Lei Macfarlane (who is also on the Bellator 278 card) in December 2020. She has since defended it against Denise Kielholtz last July. Velasquez, a 35-year-old Brazilian, is 12-0 with seven straight wins in Bellator. ESPN ranks her No. 6 at flyweight.

Carmouche, 38, is a women’s MMA pioneer. She was a part of the first women’s fight in UFC history, facing Ronda Rousey at UFC 157 on Feb. 23, 2013. Before being released, Carmouche went 6-5 in the UFC, including earning a shot at Shevchenko’s flyweight title in 2019. In Bellator, she has won three straight.

What’s at stake: It’s the biggest fight of Velasquez’s career, a chance to prove herself against someone who has been in the cage with some of the top fighters to ever compete in women’s MMA. A win over Carmouche gives Velasquez’s title reign more legitimacy. For Carmouche, winning would reward the hard work of a 12-year professional career. The former U.S. Marine got title shots in the UFC and Strikeforce but could not cash in. She’s a pioneer but has never been an MMA champion. This is her chance — and perhaps her final one.

Barber’s dream of becoming the youngest fighter to win a UFC title (a distinction held by Jon Jones) has been dashed, but she snapped a two-fight losing streak with a split-decision win over Miranda Maverick last July. Barber has been in the UFC for four years but is just 23 years old. Her ceiling remains very high.

De La Rosa, 27, has lost just one of her last four fights and is an original in the UFC women’s flyweight division going back to The Ultimate Fighter in 2017. She has put together a solid 5-2-1 record in the UFC.

The Texas resident is also coming off the first KO/TKO win of her MMA career against Ariane Lipski last June, so her improvements are evident.

What’s at stake: The UFC women’s flyweight division is wide open, mainly due to Shevchenko’s dominance. She has beaten four fighters in the UFC’s top-10 divisional rankings, including the top three. Barber and De La Rosa are currently out of the top 10, but the winner here would raise her stock and put herself in that conversation.