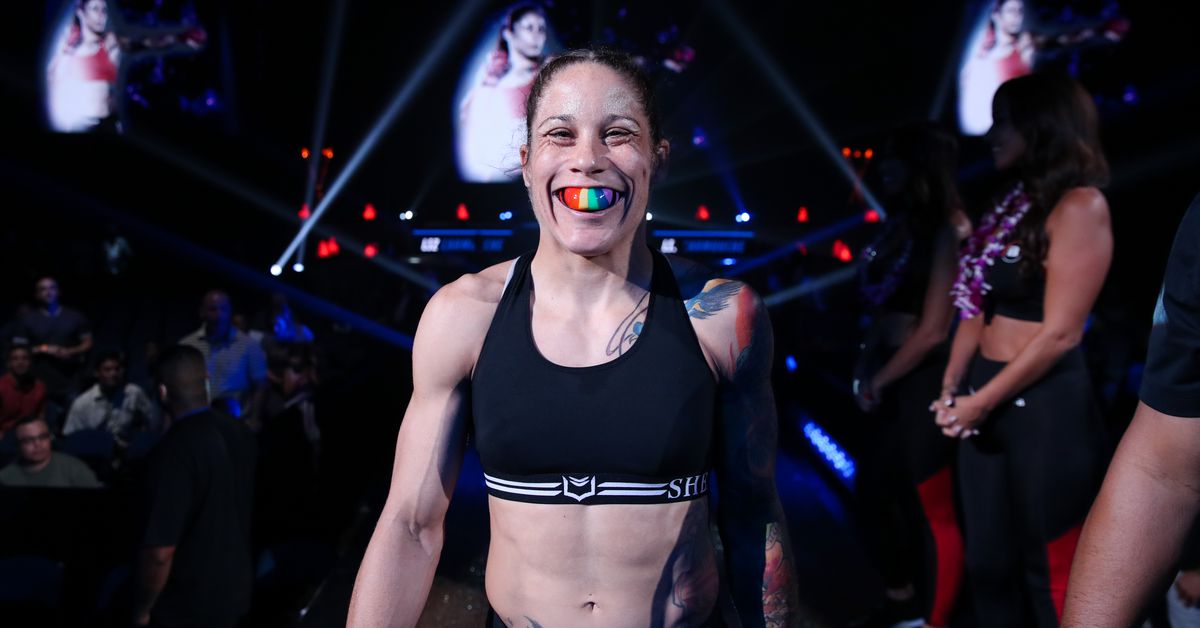 Liz Carmouche agrees with the controversial stoppage that led to her winning the Bellator flyweight title on Friday at Bellator 278, because in her opinion, referee Mike Beltran saved former champion Juliana Velsaquez from suffering a much worse fate.

“I think he stepped in at the right time,” Carmouche said in her post-fight press conference.

“I think if he’d let it continue, it could’ve been a broken orbital, it could’ve been her going unconscious. I think that when he stepped in, it was the right thing to do to protect the fighter, because she wasn’t doing anything to correctly advance her position safely, and she wasn’t doing anything to defend it, so she just kept taking it. Ending a fight that way, I’d much rather see the fighter step up and us be able to shake hands rather than her go to the hospital and not be able to remember what happened. So I think he did the right thing.”

Carmouche defeated Velasquez via fourth-round TKO in a come-from-behind performance at Bellator 278 that ended with Carmouche dropping elbows on her foe from the crucifix position. Although she was in a dominant position, Carmouche didn’t appear to be inflicting heavy damage with her ground-and-pound offense, and Velasquez immediately protested after Beltran’s stoppage, which came with 13 seconds left in the round.

Velsaquez was ahead on all three judges’ scorecards at the time of the fight-ending sequence, and even held a 30-27 lead on two of them.

Either way, it was a crowning moment for Carmouche. Prior to Friday night, the 38-year-old veteran had fallen short in all three of her prior title bouts in Strikeforce and the UFC, including her historic UFC 157 clash against Ronda Rousey in 2013. But she finally made the most of her opportunity with her fourth attempt, capturing her first career championship.

“I feel like all those opportunities were just lessons,” Carmouche said.

“They were mistakes and the things I had to take away from it so I could be prepared for today, and it was meant to be with Bellator and not any of the other organizations.”

Carmouche (17-7) continues to be undefeated in all four of her Bellator appearances since parting ways with the UFC in 2019 following a loss to UFC champion Valentina Shevchenko. She has scored finishes in three of those victories, including the 35-second knockout of Kana Watanabe that earned Carmouche her shot at the belt at Bellator 278.

Speaking post-fight, Carmouche was asked about the potential of a rematch with her Brazilian foe, with Velasquez (12-1) having suffered her first defeat in eight appearances in the Bellator cage. And the new flyweight champion was blunt in her response.

“I hope not,” Carmouche said. “I get kind of bored with rematches. I like to see something different and kind of change it up, and I’d love an opportunity to let somebody else in the division work their way up and just see what else I can show off in the cage.”

One of the potential names on that list of new opponents could be another former Bellator flyweight champion, Ilima-Lei Macfarlane.

Macfarlane is slated to meet Justine Kish on Saturday at Bellator 279 in a return from a 16-month layoff following her title loss to Velasquez.

Carmouche and Macfarlane are longtime friends and training partners, but the two also know the time may come when they’ll be opponents as well.

“We’ve said it before, we’re sister wives. We’re always friends,” Carmouche said of Macfarlane. “We’ve been there since the beginning. I mean, I was the first person that signed her up at her gym when she started out in MMA. I was her first training partner, walked her through a lot of her training camps, and we’ve always been there supporting [each other]. I mean, the last time that we came out to Hawaii, I went to her luau and she split it as a birthday party for my son. So we are close.

“We know that some day we’re going to fight, but it better be the two of us, two people that care about each other and can hurt each other then smile and laugh about it, than anybody else.”