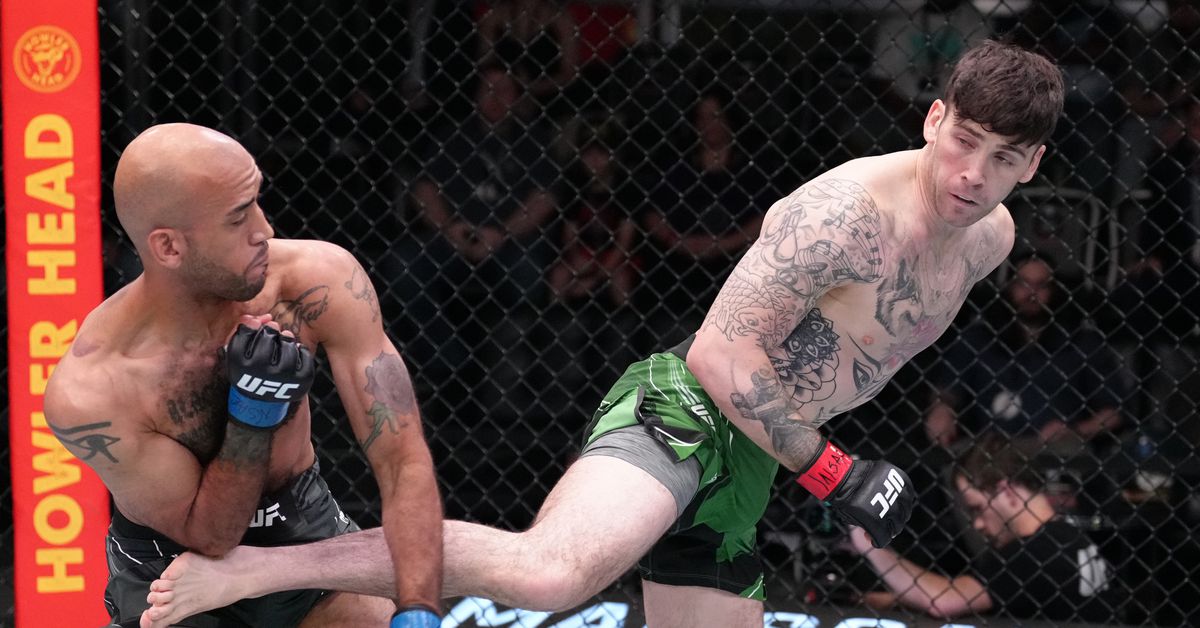 Dean Barry’s UFC debut ended in disappointing fashion, and he feels that his opponent should take some responsibility for it.

An ugly foul resulted in Barry’s first octagon appearance ending in a disqualification loss after his fingers went into opponent Mike Jackson’s eyes, leading referee Chris Tognoni to wave off the fight and award Jackson with a win.

Shortly after, Barry took to social media to address the incident, and he accused Jackson of exaggerating the foul for his benefit.

“To be honest with you, I thought he took the easy way out there,” Barry said in a video. “Didn’t want to stay, didn’t want to continue fighting. Even when I kicked him low, he was talking on the ground to me for ages. Like, if you get hit in the nuts, you can’t be talking like that. Same with the eye poke. Straight after the ref called the fight off, he was fine. Both eyes open perfectly. He said he can’t open his eyes.

“Look, I’ll take the rematch in a heartbeat if they give it to me, or just let me go back down to my weight division and fight. I thought I showed enough out there. Sorry about that. … It’s not a loss for me, I was destroying him and I got a DQ for an eye poke. What can you do?”

Look lads I’m ok in good spirits I’ll get a run at my normal weight class. Genuinely didn’t mean that eye poke I’m not one of them fighters and I’m gutted it was a DQ I was winning it by a good bit too. It’s the name of them game onto the next

The action was actually paused twice in Barry’s fight before the fateful eye gouge, as two of his strikes landed low. Neither foul resulted in a point deduction, though Tognoni issued a stern warning to Barry after the second one.

After taking a spin kick to the groin, Jackson could be heard on the broadcast saying, “a spinning back kick to the d*** … that motherf*****.”

Barry appeared to be winning the fight, as he had scored a knockdown of Jackson before being disqualified for the eye gouge at the 3:52 mark of Round 1. He falls to 4-2 as a pro, while Jackson scores the first win of his UFC and MMA career in his third try with the promotion. This was also Jackson’s first fight since June 2018.