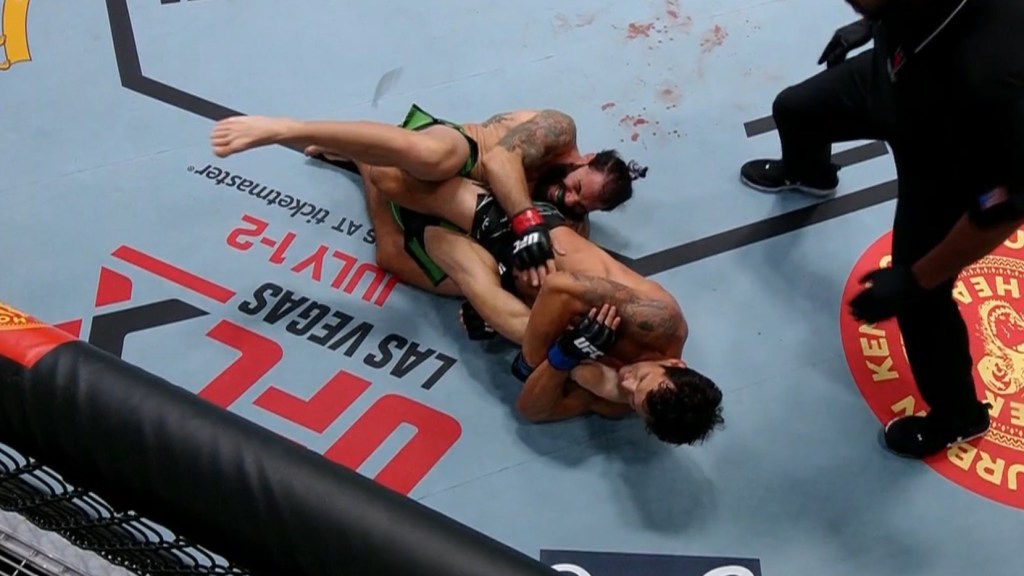 Puelles said heading into UFC Fight Night 205 that he wanted to use Clay Guida’s name to make a statement, and he did just that on Saturday night by making the gritty veteran tap out to a kneebar at the 3:01 mark of the first round of their lightweight bout.

It was the third kneebar submission victory of Puelles’ six-fight UFC tenure and fourth overall of his career. The victory pushed the 26-year-old Peruvian’s winning streak to five fights, and he’s seemed to reach a new level since moving to live in South Florida and train at Sanford MMA.

“I know I am (ready),” Puelles told Daniel Cormier during his post-fight interview. “I don’t know if that’s next, but I know that I’m ready.”

Puelles looked the part against former Strikeforce champion Guida (37-22 MMA, 17-16 UFC), who landed a takedown within the first minute of the fight. But Puelles kept attacking the left arm from bottom position with an omoplata attempt, but Guida defended well. So Puelles transitioned to a triangle attempt against the cage and then an armbar, but Guida – being the tough veteran that he is – found a way out. Guida showed poise while his left arm remained trapped between Puelles’ legs, but he eventually found his way out and tried to advance his top position.

That proved to be costly as Puelles locked in a lightning quick kneebar that got a quick tapout from Guida.

Guida, 40, fought out his UFC contract with the loss to Puelles, leaving the future of the UFC Hall of Famer unclear.