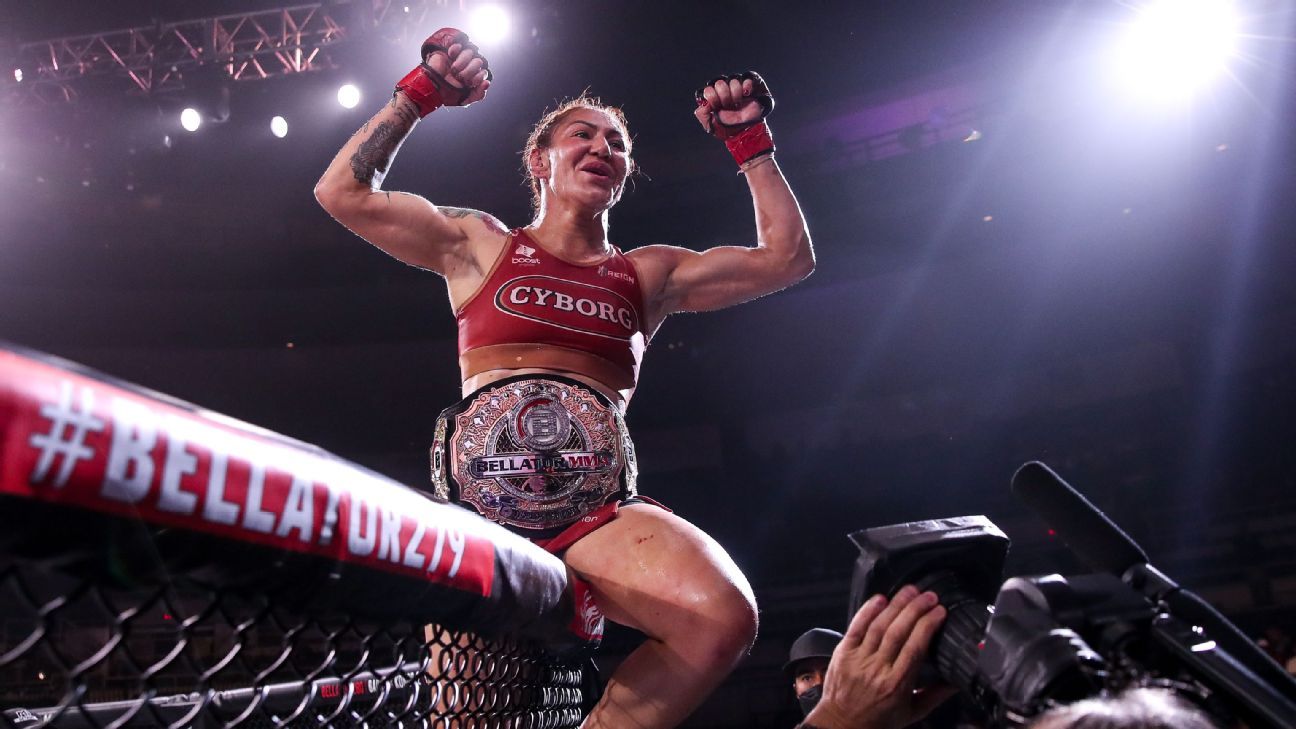 Arlene Blencowe, blood streaming down her face, pointed to the ground, signifying she wanted to finish Saturday night’s fight with Cris Cyborg in a wild exchange in the middle of the cage.

A few years ago, Cyborg might have gotten roped into a brawl, like she did when she got knocked out in the UFC by Amanda Nunes in 2018. But not this time.

With the victory, Cyborg defended her Bellator women’s featherweight title for the fourth time. The fourth consecutive title defense ties Ben Askren for the Bellator record. This was the first time Cyborg went to a decision since 2019.

Cyborg and Blencowe met before, with Cyborg picking up her first career submission in an October 2020 win. Blencowe is an accomplished boxer, and she looked extremely durable against the hard-hitting Cyborg on Saturday.

“Thank you to Arlene for a nice battle tonight,” Cyborg said in her postfight interview.

Cyborg dominated the whole way, though Blencowe landed some nice right hands and left hooks. Cyborg landed hard combinations and hurt Blencowe badly in the first round. Once Blencowe was on the ground, on a knee, Cyborg made the tactical error of throwing a knee toward Blencowe’s head, which is illegal in that position.

Referee Jason Herzog took a point from Cyborg, though it had no bearing on the result of the fight.

Cyborg also mixed in hard leg kicks and a front kick up the middle to Blencowe’s face and chest that she had not shown before. Cyborg opened up a nasty cut over Blencowe’s left eye with an elbow during a second-round clinch.

“You have to change every fight,” Cyborg said. “You have to improve and get a better game. Today, I showed a little more.”

ESPN has Cyborg ranked No. 4 in the world on its pound-for-pound women’s MMA list. Cyborg has said she will be a free agent this summer. In her postfight interview, she said she’s looking for the biggest fight, whether that’s a rematch with Nunes, a fight in Bellator against Cat Zingano or a matchup with PFL champion Kayla Harrison.

Cyborg (26-2, 1 NC) has won six straight and has only one loss — to Nunes — since her pro debut in 2005. The Brazil native, who lives and trains in Orange County, California, is now 5-0 in Bellator. Cyborg, 36, has won titles in four major promotions — UFC, Bellator, Strikeforce and Invicta FC — which has never been done before. In total, Cyborg has 11 title defenses in her career.

Blencowe (15-9) had a two-fight winning streak snapped. The 39-year-old Australia native has never been knocked out in her nine-year pro MMA career.

In the grand prix semifinals, Stots will defend his interim title against the Leandro Higo vs. Danny Sabatello winner. Mix will take on the winner of a fight between Magomed Magomedov and Enrique Barzola.