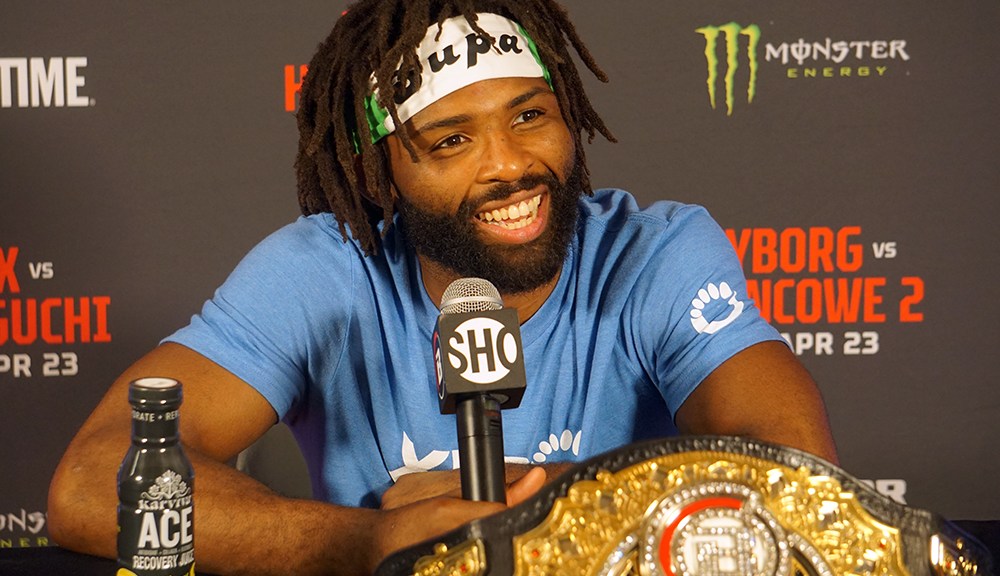 By Danny Segura and Matt Erickson |

Raufeon Stots is more than fine being the interim champion of Bellator’s bantamweight division.

Although it’s not the undisputed belt, the 33-year-old fighter is fully satisfied with his standing given the implications and dilemmas the undisputed crown would’ve brought to his fighting career.

Stots (18-1 MMA, 6-0 BMMA) won the 135-pound interim title, having knocked out Juan Archuleta in the co-main event of Saturday’s Bellator 279 event in Hawaii. Stots was originally scheduled to fight for the real belt, but the champion Sergio Pettis, who is Stots’ good friend and teammate, had to pull out of the title fight and grand prix due to injury.

“Supa” is glad he didn’t have to fight his friend – at least for now.

“To be honest with you, the goal is to win this million dollars – that’s my No. 1 goal right now,” Stots told MMA Junkie at the Bellator 279 post-fight press conference. “I got two more fights to win this million dollars and to be honest the interim sounds perfectly fine with me right now. I’m going to hold onto Serg’s (Sergio Pettis) belt till Serg is back and then we can figure out something after that.

“But right now I’m happy. If I were to win a belt from Serg, like Serg is my boy. It’s like me taking his girlfriend or something, that don’t feel good to me. This feel good to me. Juan Archuleta, I ain’t really care for his bald head. I really don’t care. This for me, I’m on cloud nine.”

With the win, Stots also advances to the semifinals of the tournament where he will face the winner of the Bellator 282 matchup between Leandro Higo and Danny Sabatello scheduled for June 24.

Stots hopes Sabatello makes it to the semi-final, as that’s a fight he’d have no problem taking.

“If I get to fight fricking Sabatello, I mean, I’d be happy because he’s another person that I don’t like, so I would love to fight him. So yeah, he’s got to get through Higo, so we’ll see what happens with that. But congratulations to him, he looks like an amazing wrestler and he imposed his will on somebody.”