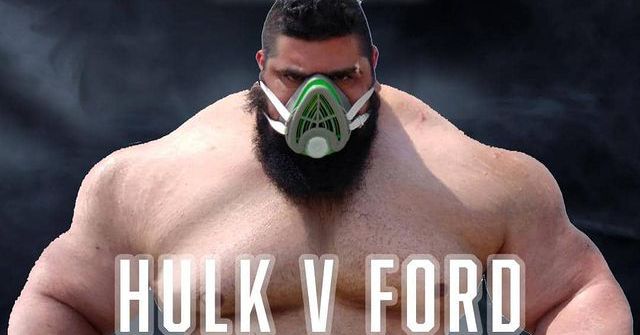 That fight is now canceled.

In fact, event organizers were forced to scrap the entire card, which also featured the pay-per-view (PPV) co-main event between soccer star Patrice Evra and YouTube personality Adam Saleh. No official reason was given for the cancelation but it sounds like Gharibi is holding Ford responsible for the card’s collapse.

“I heard Ford doesn’t want to fight, it is not me, not any other fighters,” Gharibi said. “I never cancelled any fight between us but he doesn’t want see me again! It is against the contract and my legal team have started looking at it. Actually ‘pretty boy’ can’t even fight, he just hides and runs away, he must have a permission from a woman first. I can’t believe an opponent like him, it’s shameful. This victory isn’t an honor for me, it’s a century joke not a century fight.”

The Ford vs. Hulk celebrity boxing event was originally booked for April 2, also in London, but “unforeseen circumstances” delayed the card until April 30. With this most recent setback, Boxstar will be forced to issue ticket refunds for those fight fans who already purchased seats for this weekend’s show.

“Boxstar are regrettably postponing the planned event on April 30,” promoters wrote on social media. “To lose such a big (in every sense of the word) main event has understandably been a blow to the event and to the fans. Due to this, rather than pushing ahead with the April 30, we have instead made the difficult decision to postpone the event. Anyone who has bought tickets for the April 30 show will be contacted about refunds.”

Ford provided no context for his withdrawal but did promise his fans a boxing debut was still in the cards. In a strange social media admission, “The World’s Scariest Man” revealed he didn’t know who his next opponent would be, when the proposed bout would take place, or why it would even happen in the first place.

“This is a statement I didn’t want to have to release but unfortunately my fight is going to be postponed,” Ford said. “I don’t want to go down the route of talking about it; too much time and energy has been wasted. For me, personally, I’m still training hard, there will be a debut, there will be a fight, I’m just not 100 percent sure who, when or why, but it will happen.”

Maybe it’s not too late to sign up for this new boxing league.