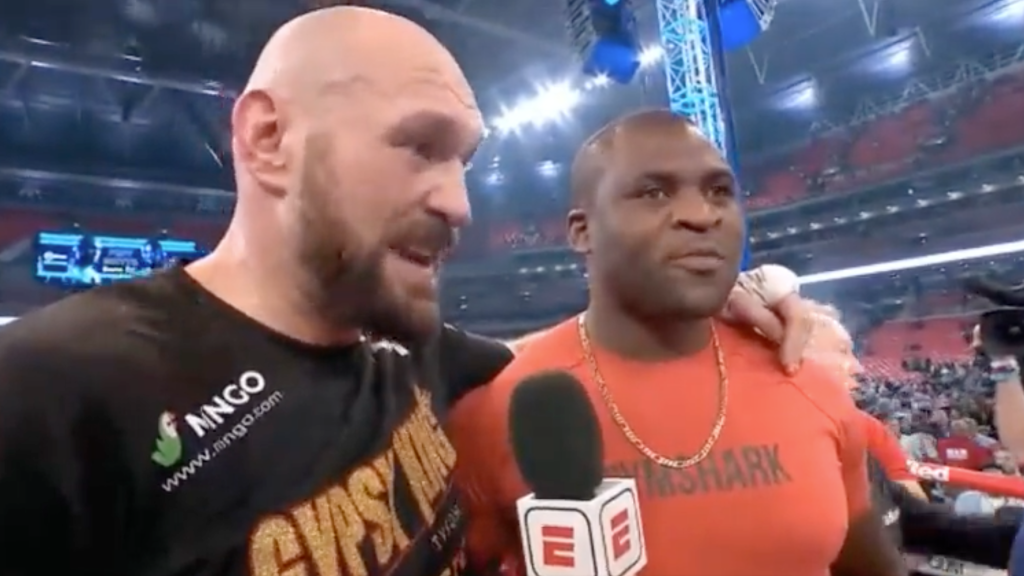 Check out this week’s “Spinning Back Clique,” MMA Junkie’s weekly show that takes a spin through the biggest topics in mixed martial arts.

WBC heavyweight boxing champion Tyson Fury defeated Dillian Whyte at Wembley Stadium in front of over 90,000 fans. During his post-fight interview in the ring, UFC heavyweight champion Francis Ngannou entered, and the pair teased a hybrid rules fight between the two. Did seeing these two next to each other increase the buzz for this potential matchup? Will it come together considering Ngannou’s contract situation with the UFC?
Bellator featherweight champion Cris Cyborg recorded another title defense at Bellator 279 by emerging victorious over Arlene Blencowe in a hard-fought rematch. Afterward, Cyborg expressed her desire to step into the boxing ring in the near future, and Bellator president Scott Coker affirmed that if she wanted to, her contract allows for it. Do you want to see Cyborg in the boxing ring or would you rather see her continue her dominance in the MMA cage?
Bellator 278’s main event crowned a new women’s flyweight champion, but it was not without controversy. Liz Carmouche claimed gold by pinning now-former champion Juliana Velasquez to the mat in a crucifix, and rained down elbows until she got the stoppage win in the fourth round. However, Velasquez and many others believed the stoppage was premature, resulting in the loss of her title and undefeated record. Did referee Mike Beltran stop this one early?
Former UFC strawweight champion Jessica Andrade returned to the division she once ruled at UFC Fight Night 205 to face Amanda Lemos in the main event. Not only was it a successful outing, but Andrade also made history by recording the first standing arm triangle submission in UFC history. Andrade holds wins in three weight classes in the UFC, a part of a select group. Which three-division competitor is your favorite?
Former champ-champ Conor McGregor will return to action in the near future. He says he will walk right back into a welterweight title fight against Kamaru Usman. UFC commentator Joe Rogan says McGregor should take a ‘tune-up’ fight instead of diving right back into the deep end. Who should McGregor return against when he’s ready to return to the cage?

“Spinning Back Clique” is released each Tuesday on MMA Junkie’s YouTube channel. You can watch the full episode in the video above.