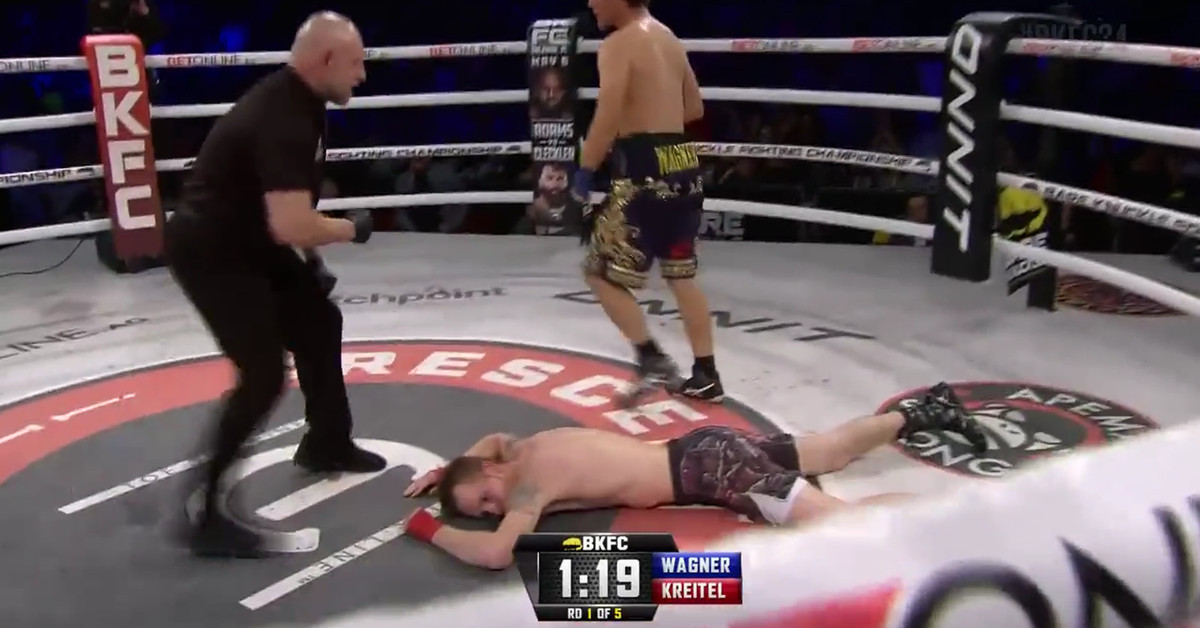 While Bare Knuckle Fighting Championship 24 probably wasn’t at the top of the watching list for many combat sports fans this weekend, the night did (as usual) result in a bunch of really wild knockouts. Including this one from Billy Wagner, who caught his opponent 43 seconds into their bout with his face in the perfect position for a brutal uppercut.

It was an overhand left that Wagner wobbled Jacob Kreitel with, setting up the uppercut which faceplanted Kreitel to the canvas.

Wagner was a 4-2 pro boxer coming into BKFC 24, his first bare knuckle affair. Kreitel entered the fight with a 1-6 pro MMA fight and apparently two bare knuckle bouts with no known results that both took place over the last 30 days.

In other Bare Knuckle FC 24 results, Joe Riggs was unable to avenge the “Montana Tomata” incident from the weigh-ins where Lorenzo Hunt shoved a half-eaten tomato into his face. Hunt KO’d the former UFC fixture Riggs via KO 1:12 into round two.

To actually see Hunt defeat Riggs you’ll have to watch the event over at FITE.TV (the prelims are free) but we’ve got some other mean knockout finishes from the card mixed into the results below:

Rusty Crowder def. Louie Lopez via TKO (Doctor’s Stoppage) at 2:00 of Round 1

Braedon Tovey def. Jordan Christensen via TKO (Medical Stoppage – Vomiting) at 2:00 of Round 4 (yes you read that right, vomiting)

Tovey wins because Christiansen vomits his corner onto the canvas. #BKFC24

James Dennis def. Brian Maxwell via TKO (Right Cross) at 0:26 of Round 2

Dylan Schulte def. Darrick Gates via KO (Overhand Left) at 0:20 of Round 1