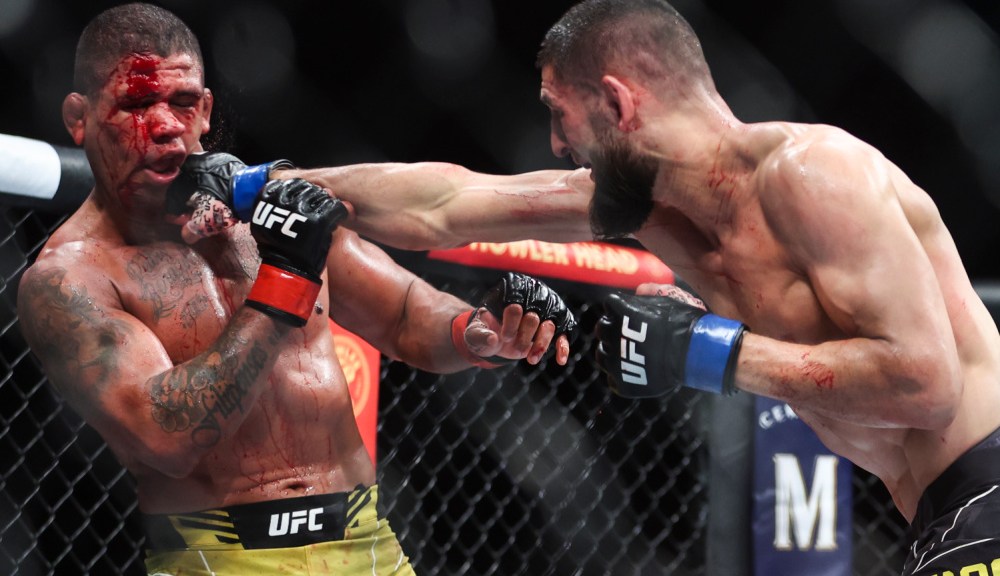 With another action-packed month of MMA in the books, MMA Junkie looks at the best fights from April 2022: Here are the five nominees, listed in chronological order, and winner of MMA Junkie’s Fight of the Month award for April.

Chimaev passed his biggest test to date as he stood toe-to-toe with Burns for the majority of three rounds and got the upper hand. Chimaev spilled blood in the cage and had some sketchy moments, but ultimately he persevered with the unanimous decision win and his undefeated record in tact.

After multiple near-stoppages that had Johnson on the cusp of victory, Vassell, somehow, someway, rallied to pull off a TKO stoppage due to ground-and-pound with 39 seconds remaining in the first round.

Clay Collard (21-9) and Jeremy Stephens (28-20) put on one of the best fights in PFL history in what was the first main event of the promotion’s 2022 season.

The two lightweight fighters went toe-to-toe for 15 minutes, trading all kinds of strikes that resulted in plenty of damage. Collard was awarded a unanimous decision win over Stephens, taking all three rounds for his most effective shots landed.

Like the first time they fought, Cris Cyborg (26-2 MMA, 5-0 BMMA) defeated Arlene Blencowe (15-9 MMA, 8-5 BMA). Unlike it, however, the fight went the distance and was far more competitive.

Blencowe survived all five rounds against the legendary Cyborg – and had her moments, no matter how brief. But in the end, Cyborg’s path of destruction continued as she won a unanimous decision after bloodying her opponent, knocking Blencowe down and doing what she does best to defend her Bellator women’s featherweight title.

Font looked great for the first 10 minutes and landed a record amount of significant strikes for a UFC bantamweight fight. But Vera came on strong in the later rounds and got his hand raised thanks to three knockdowns, a lot more visible damage inflicted, and the ability to walk through Font’s constant pressure. And it got him the unanimous decision win.

The winner: Chimaev vs. Burns

There are many good fights and some great fights. But Chimaev vs. Burns? That was a rare caliber.

The first round played out as many of Chimaev’s fights have in the past. He quickly took the fight to the canvas. But unlike many of his other UFC foes, Burns was able to utilize his grappling to get back to his feet. Once there, Burns found some success with his boxing. However, Chimaev landed a massive blow that dropped Burns in the final round and split the Brazilian’s head wide open. Burns survived the onslaught but was seemingly wobbly until the end of the round.

Round 2 began and Burns had no problem with his footing. His striking was on point, but so was Chimaev’s. Both fighters had their moments, going tit for tat. The crowd was electric with chants a plenty, sometimes overlapping one another into an indistinguishable roar. Drama ensued in the final minutes as Chimaev stunned Burns, only to receive a massive overhand. Chimaev was stunned. Another giant Burns punch floored Chimaev to the canvas. Chimaev somehow grabbed hold of Burns and dumped him to the canvas, but he was still hurt.

As the final horn sounded, Chimaev laid on top of Burns but wouldn’t let go. Burns shoved him off and Chimaev landed an open-hand slap – all after the horn. Chimaev stumbled back to his stool.

Both men were exhausted in Round 3. Chimaev landed a lengthy flurry against the fence, but Burns did enough where the fight did not appear to reach a close point to stoppage. For the remainder of the round and fight, both men had their moments. They traded blow for blow as they visibly cringed to dig deep and throw single-combination haymakers. The crowd was not sitting for the final five minutes. A wild flurry capped off the performance, before the horn signaled a thunderous applause and the decision was read in favor of Chimaev.