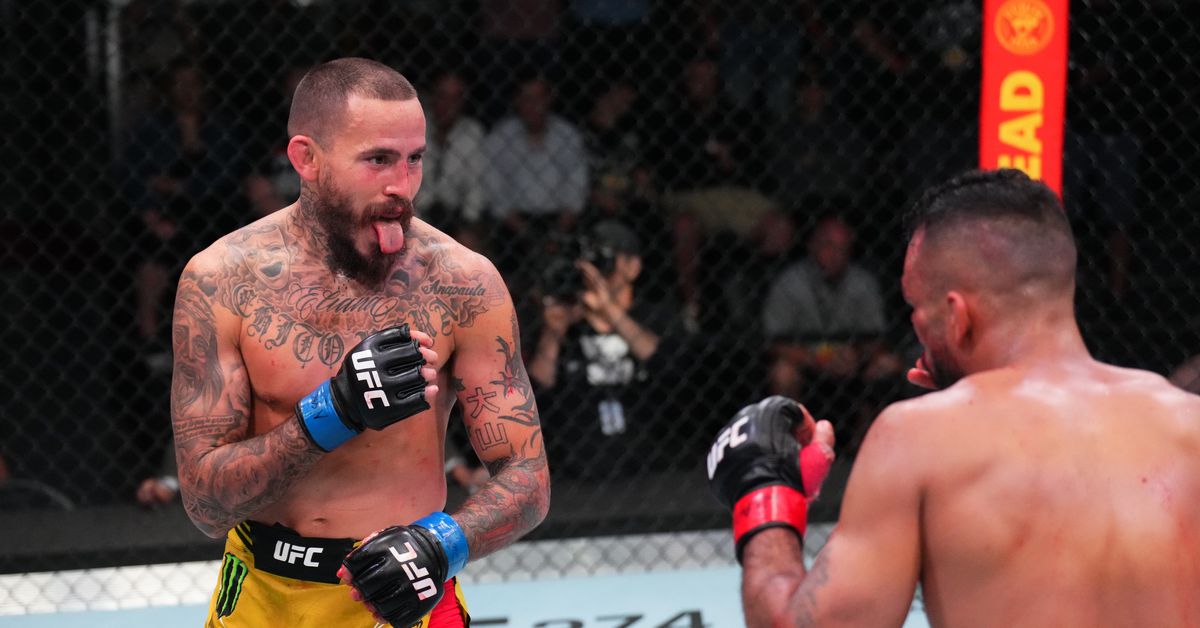 Since returning to action in 2021 following a two-fight losing streak, Dominick Cruz’s eyes have been set on the title. The former Bantamweight kingpin wants to regain his lost throne, and he’s worked his way back into the Top 10. He’s been consistent in his ideology: Cruz wants fighters ranked ahead of him so that he can climb the ladder and make progress towards the belt. At 37 years of age, it’s an understandable point of view.

Fighters like Marlon Vera who were ranked behind Cruz are likely less understanding. “Chito” has called out Cruz in the past, but he’s always been behind “The Dominator” in the rankings, and thus doesn’t meet Cruz’s criteria. After he turned No. 5-ranked Rob Font’s face into mush, however, there’s likely been a shift in power.

Vera is confident he’ll be ranked ahead of Cruz when the new rankings release, so he’s circling back around and asking Cruz if he’d like to throw down.

“Before in the ten times he declined to fight me, I’m not calling him a p—sy, but he declined a couple of times in the past,” Marlon Vera said on The MMA Hour (via BJPenn.com). “He always talking about how he wants to fight someone above him. Guess what, I’m above you right now motherf—ker, so now we can go. Now we can go.”

Vera continued, “They tried to make it when I lost to Aldo, I was [ranked] 14 or 15 back then. He was like, it’s not worth it, it’s ranked too low, blah blah. Then, they tried to make it before the Edgar fight, I was [ranked] like 13 or 11. He said I was too low, he needed someone to push him to the belt. I think if you beat number five, you’ll be pushed to the belt homie.”

Vera also extended an invite to throw down on Twitter, reiterating the same message.

Dom you always says you looking for someone above ya. I’m above ya now so wanna fight?

Cruz has yet to respond publicly, but given Vera’s current momentum, upsetting “Chito” would certainly help move Cruz closer to the title. Of course, there are other options for both men, but if the highly-ranked Vera wants this match up, why not?

So, here’s the update: I still have no opponent for May 28. I told my management let’s set a deadline at the end of the week to find out one way or another. Worst case, all names will carry over to the banner when I do finally get booked, which would most likely be in the fall after my June wedding …

Tristan Connelly didn’t manage to defeat Darren Elkins over the weekend, but this is a victory nevertheless.

This is abysmal trash talk.

A rare main stream appearance for a Muay Thai legend!

Clay Guida recounts the origins of his legendary MMA career:

It’s excellent to see Demian Maia back on the mat! Back takes and triangle chokes — classic!

I was fortunate enough to watch this fight live, which was awesome. Nowadays, it’s a great display of both “El Cucuy” and Kevin Lee near their peaks.

Reaching out for the clinch while an opponent punches can be risky, but it can pay off too!

Midnight Music: Is In The Court Of The Crimson King the peak of prog rock?