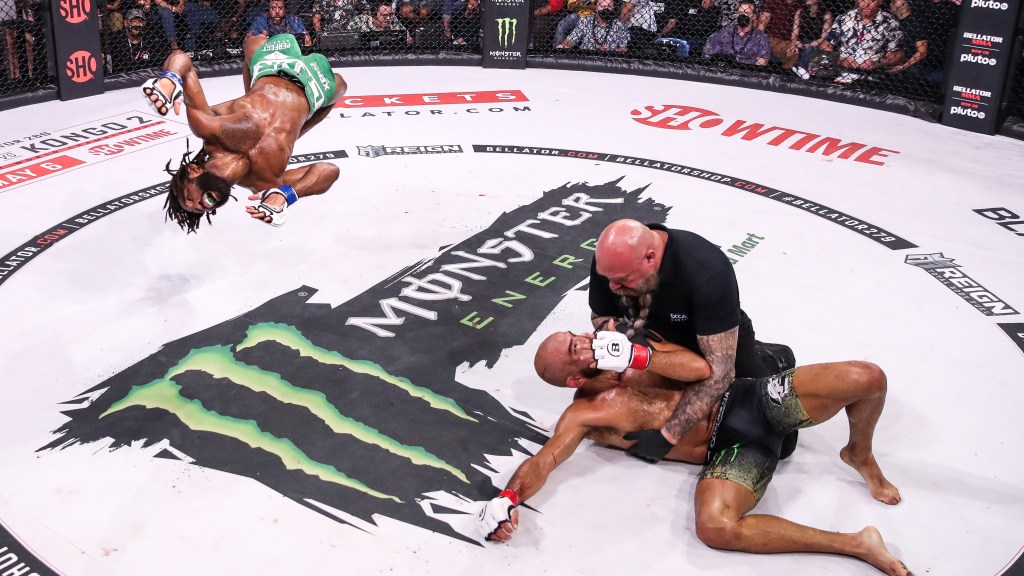 With another action-packed month of MMA in the books, MMA Junkie looks at the best knockouts from April 2022: Here are the five nominees, listed in chronological order, and winner of MMA Junkie’s Knockout of the Month award for April.

After Akpan stuffed a takedown from Hitchens, the two fighters bounded upward. As he looked to back off and reset, Hitchens dashed away – but directly toward Akpan’s power side. Akpan made him pay as he spun and landed the knockout blow.

Mike Malott (8-1-1 MMA, 1-0 UFC) made quite the first impression when he flattened Mickey Gall (7-4 MMA, 6-5 UFC) with a violent left-hook TKO in their welterweight bout.

The fight was Mallott’s first with the promotion. He earned a contract with the promotion after a victory on Dana White’s Contender Series in 2021. The signing was proved a solid one early. As both fighters threw in an exchange, Malott landed hard on the noggin of Gall, who face-planted to the canvas.

Omari Akhmedov (22-7) put himself in a good position to kick off the 2022 PFL light heavyweight season with a vicious finish of Viktor Pesta (18-7).

The veteran fighter earned a quick, first-round knockout when put away Pesta with a brutal right hand that sent Pesta towering down to the canvas just 85 seconds after the bout began.

After two rounds of relatively competitive action, Stots opened the third with a grazing knee that hurt Archuleta. He followed up with a precise serious of punches that put Archuleta out for the first time.

If Renan Ferreira (9-2) wanted to put his name atop the list of heavyweight contenders in the 2022 PFL season, consider the job done after stopping Jamelle Jones (12-8).

Ferreira took out Jones in just 25 seconds, setting a heavyweight record for the promotion’s fastest finish. Ferreira threw a knee early in the fight, and his shin connected on the left side of Jones’ face and jaw. A few punches on the canvas later, and Ferreira was in the records books.

Stots added another one for the highlight reel – and a gold belt, too.

Up until the final exchange, the fight was a relatively grapple-heavy affair. Archuleta scored a takedown early before Stots got one of his own. The second round was mostly striking, topped off by some cage control by Archuleta to close out the frame.

In the third round, Stots erased all meaning of the opening two when he threw a high kick that cracked Archuleta across the skull. The shot clipped and floored Archuleta, who was unable to recover as he was met with brutal follow-up punches.

With the win, Stots also advances to the semifinals of the tournament where he will face the winner of the Bellator 282 matchup between Leandro Higo and Danny Sabatello scheduled for June 24.

The interim title was implemented after undisputed titleholder Sergio Pettis suffered a knee injury in training that knocked him out of the tournament.