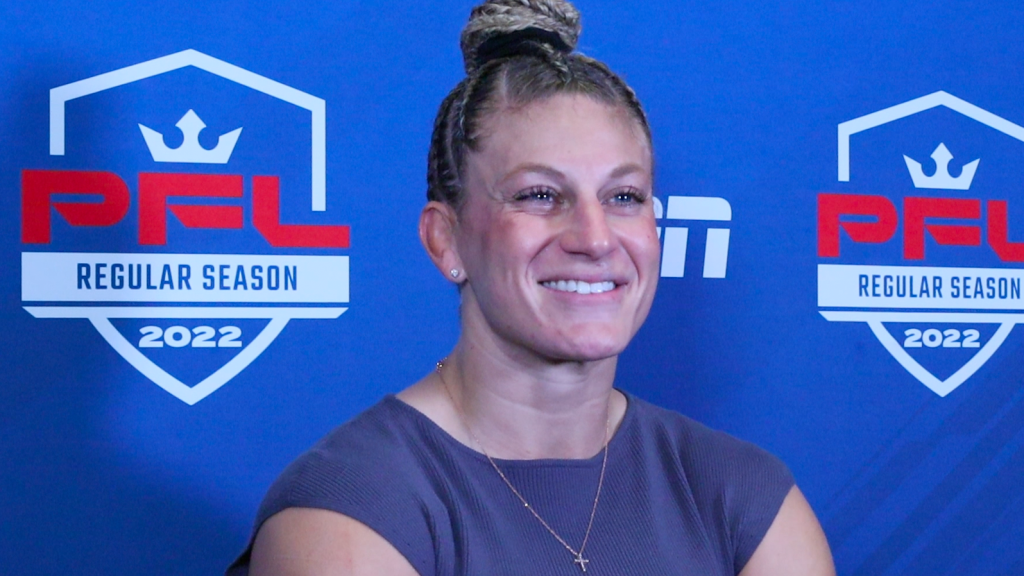 ARLINGTON, Texas – It’s been a while since Kayla Harrison had to put in a full and go home without a finish, but the PFL’s biggest star isn’t worried.

In fact, Harrison seems as confident as ever that another PFL title and $1 million payday is in her future. Harrison (13-0) outworked Marina Mokhnatkina (6-3) for a unanimous decision in the 2022 PFL Week 3 main event Friday in Arlington, Texas.

Harrison got 3 points in the standings for the win. In the 2021 regular season, both her wins were finishes, which gave her 12 points for an easy trip to the postseason. Friday, Larisssa Pacheco was the only women’s lightweight on the bill to get a finish and sits atop the standings with 6 points.

With three other women in the division tied with her at 3 points, it’s not a mathematical assurance that merely winning her second fight in the regular season would get her into the four-woman playoffs. But Harrison said she isn’t thinking about that.

“I’m not worried about it,” Harrison said in her post-fight news conference with media members. “I just go out there (and) I do my job. I know that I’m going to make the playoffs. I know I’m going to win the tournament. I just put one foot in front of the other. Whoever said that the only certain things in life are death and taxes didn’t watch me in this tournament. Just give me my time: I’ll get in there and do what I do.”

That was Benjamin Franklin, the death and taxes thing. And not that Harrison needed to do much inventing of her own after a five-fight streak of finishes, but that it didn’t come as easy this time might serve her well down the road.

Harrison said she thought showed off her striking a little more than she has in the past, and that’s something she’ll take out of the win.

“I think I landed the most strikes on my feet this fight. I was proud of that,” she said. “I don’t think I really got hit at all during the fight. I think I had good head movement. I think I had good footwork. I felt like the distance, I was reading it well. I didn’t really ever feel in danger. I’m still getting used to everything on my feet, and she did a good job of surviving on the ground. I think I showed a lot of improvement, but I can improve more.”

Harrison, as a two-time $1 million PFL winner, always will have a spotlight on her. That spotlight could get brighter this year after she stayed with the PFL after testing the free agency market.

Now in the conversation alongside UFC women’s featherweight champion Amanda Nunes and Bellator champ Cris Cyborg as one of the best women’s fighters in the world, there has been much talk about what a Harrison vs. Cyborg fight would look like.

But frankly, Harrison is over it and said she’s focused on what she has to do in her own promotion.

“On to the next fight,” she said. “My thoughts aren’t on Cyborg right now. Obviously, a (PFL) season – four fights in five and a half months is grueling. It’s a grind. I see a lot of areas where I need to keep getting better, so my focus is on me, not on Cyborg. I’m tired of talking about her. I’m tired of thinking about her. Now she’s going to be a free agent. The ball’s in her court. If she wants this fight, she knows where I’m at. Don’t ask me anymore questions about Cyborg tonight, OK?”

Alex Pereira says UFC 276 matchup vs. Sean Strickland will crown next title challenger: ‘I have a clear path’
No Bets Barred: Finding value in a triple-header weekend of UFC Vegas 57, PFL 5, and Bellator 282
Michael Bisping: Conor McGregor had a crazy run, but doesn’t go down as one of the featherweight greats
UFC on ESPN 38’s Nate Maness eyes Adrian Yanez with Umar Nurmagomedov win
Charles Oliveira will face Islam Makhachev at UFC 281, Islam Makhachev REACTS!