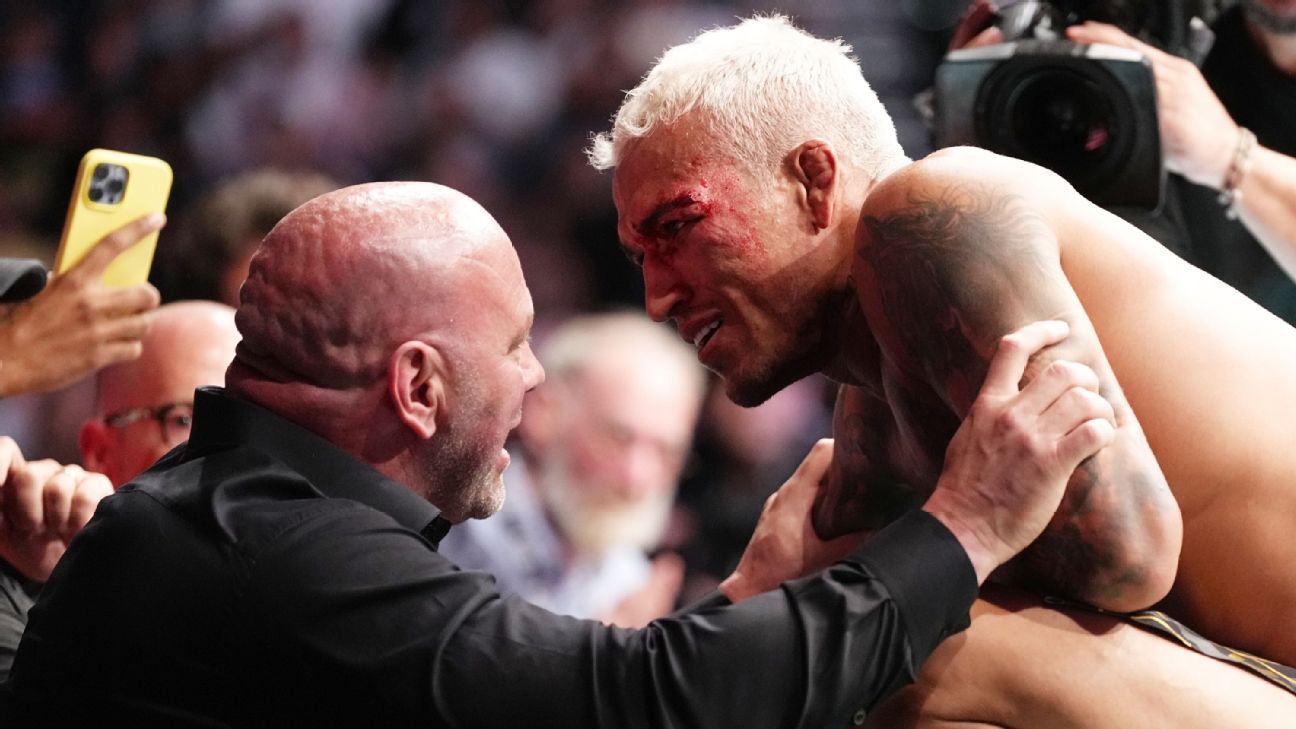 The drama that surrounded Charles Oliveira since the moment he stepped on the scale on Friday disappeared in an instant with a first round submission finish of Justin Gaethje. Both Oliveira and Gaethje exchanged some big shots that resulted in their opponents on their back, but once Gaethje hit the mat, Oliveira seized the moment and finished the fight with a rear naked choke.

Now Oliveira is officially the No. 1 contender for the vacant UFC lightweight title and at the moment there isn’t a perfect fit for a next foe. As for Gaethje, two losses for the title will set him back, but he remains one of the sport’s most exciting fighters and will have more big moments in the spotlight in the future. 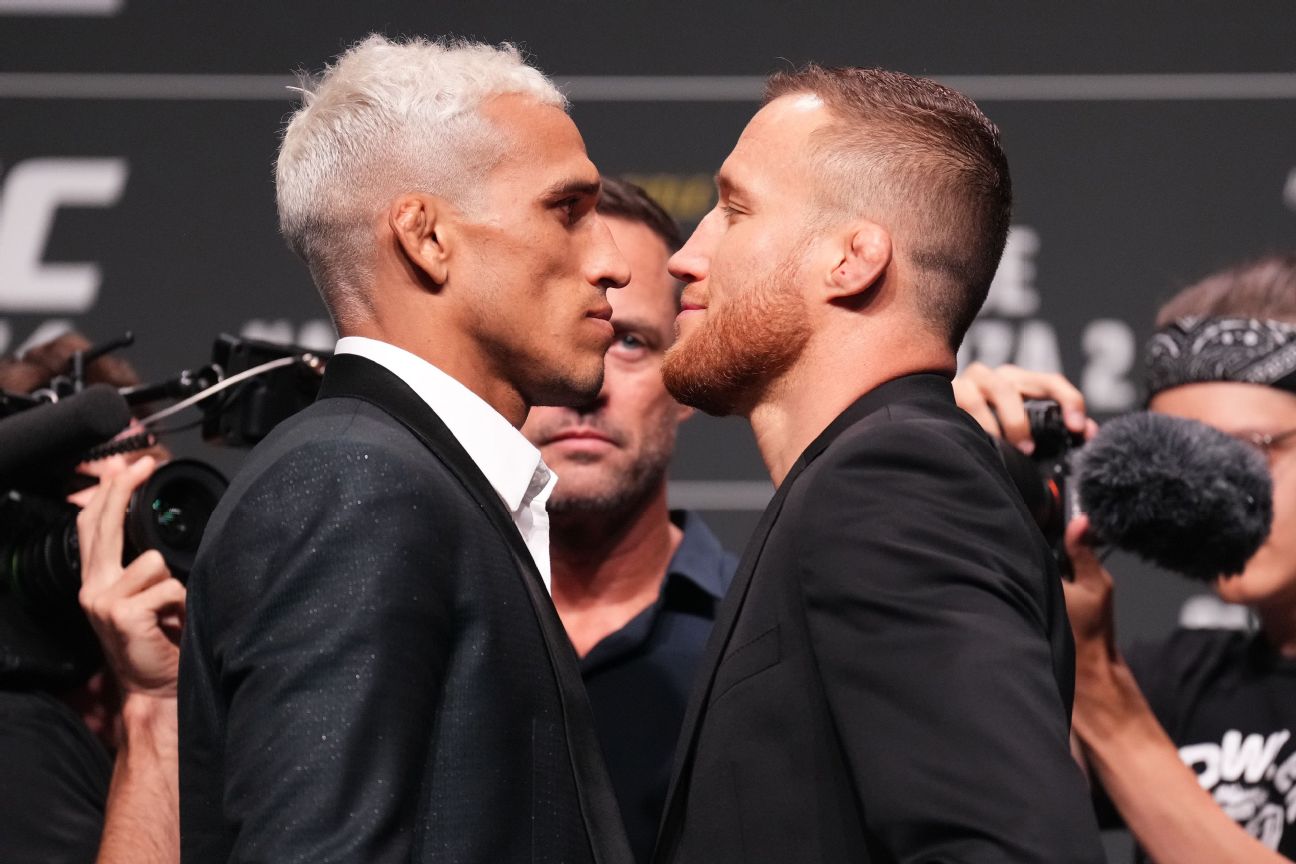 If the PPV is purchased, all fights from UFC 274: Oliveira vs. Gaethje will be available to watch on ESPN+.

Before the exhilaration of the Oliveira win, Rose Namajunas and Carla Esparza went five rounds for the strawweight title. Esparza won the fight by split decision and became a two-time strawweight champ.

Michael Chandler stole the night with a front kick knockout that will be replayed for ages. Chandler was involved in a close first round against Tony Ferguson, but finished the fight in epic fashion. He then grabbed the mic and hit a memorable promo that immediately caught the attention of Conor McGregor and potentially set the wheels in motion for a matchup between the two in the not too distant future.

So who’s up next for shots at the gold? Who will Chandler and Randy Brown face next? Let’s take a look at the options for the standouts at UFC 274.

Who should be next: Alexander Volkanovski, if Volkanovski beats Holloway in July

I’m gonna be honest — I don’t know the answer to this one. Look, whether he’s the “official” champ or not, he’s the champ in practice, right? We all acknowledge he’s the champ. Yes, he missed weight for this fight and that’s on him, but he hasn’t lost that distinction in my eyes. If anything, fine, don’t count this victory over Gaethje as a title defense but reinstate him as the champ.

Anyway, I don’t know what’s next.

Islam Makhachev is the most deserving, but I strongly believe the UFC is going to rebook Makhachev against Beneil Dariush. So, what does that leave as the best option? If Volkanovski beats Holloway in their trilogy bout, he’s been talking about moving up, and I like the idea of him moving up if he beats Holloway. Maybe end the year with a champ vs. champ fight at 155 pounds?

Always. For the record, I don’t think McGregor is deserving of a title shot — of course he’s not — but as I’ve said a million times (and we all know it to be true) the rules do not apply to McGregor.

Depending on how certain things shake out, it wouldn’t shock me to see McGregor get another title opportunity. He is always the wildcard.

Who should be next: Winner of Rafael dos Anjos vs. Rafael Fiziev on July 9

This was a tough one for Gaethje, obviously. He’s had two chances at a UFC lightweight championship now, and has come up short against two of the best lightweights of his era (of all time, really).

He’s 33 — still has plenty of time. He’s popular and he’s good. This doesn’t have to be the end of his championship hopes — not by a long shot — but no one can blame him if he feels like this was supposed to be his shot.

Lightweight is crowded with talent, as always. If you look at the top of the division, two of the obvious names Gaethje has never fought are dos Anjos and Fiziev. Either one would be a heck of a fight.

I mean, probably not? I still expect McGregor’s next fight to be something at welterweight (unless he were to be offered a lightweight title fight). But I’m gonna throw this one out there because it would be a really fun fight.

Who should be next: Winner of Zhang Weili vs. Joanna Jedrzejczyk on June 25

The biggest winner of that debacle might be Zhang or Jedrzejczyk. You can’t do a third fight between Esparza and Namajunas — maybe ever. Literally no one will want to see it.

Had Namajunas won, I would have liked Marina Rodriguez as the next title challenger, but she’s already lost to Esparza. Suddenly, the winner of Zhang and Jedrzejcyzk looks like a great option for the No. 1 contender.

No chance. Just no chance.

Who should be next: Marina Rodriguez

Well, what should be next is a lot of self-reflection. Namajunas didn’t get beat. She just didn’t give herself a chance to win. She made a bet with a UFC title and left it completely to chance.

I understand she was concerned about takedowns, but this sport is graded on offense. We’ll see what Namajunas ends up saying about this performance, but at the end of the day, she left it to chance, and I’m surprised.

Rodriguez is a great next matchup. She’s good, long and powerful. She’s going to come to fight — which is what Namajunas needs after this fight.

See above. Just no chance.

Who should be next: Conor McGregor

Reward the man. That was perfect. A jaw dropping knockout, followed by a perfect callout on the mic.

I don’t disagree that plenty of people would like to see Chandler fight for the title again, but I don’t think it’ll be next. Islam Makhachev or Beneil Dariush will have something to say about it. That’s my guess. We’ll see. Lightweight is always hard to predict. But this option is even better.

That was one of the best promos ever from Chandler. He arguably is the most entertaining man at 155 pounds. Has he taken that throne from McGregor himself? I know the UFC wants to do McGregor-Nate Diaz III, and I know why. It’s the biggest fight to make, even bigger than this one.

I don’t know what’s gonna happen, but this is one heck of an option.

I’d have a nice knock off this guy, no doubt about it. A firework spectacle. I like the 170 shout also. Tipped him over. I’m definitely game to fight this guy at some stage in my career. I see it happening after tonight. Congrats on a solid win Michael and another barnstormer.

It could be next. I don’t think it will be. I think the division is too crowded, as always. Chandler’s loss to Oliveira is too fresh. There are other possible title contenders, but we’ll see how the schedule plays out. We’ll see where McGregor lands. We’ll see where Makhachev/Dariush gets booked. If it gets booked.

A lot to see. But Chandler is in a good spot.

Who should be next: Li Jingliang

Dude. How impressive was Randy Brown? Brown had swagger, out there slipping and countering with his hands down … against Khaos Williams? OK, Randy. Not too shabby. And this man has won five of six, with the only loss during that stretch to Vicente Luque.

Time to take notice of what Brown is doing. He should get a ranked opponent. Jingliang is a fun fight, and he’s ranked inside the top 15. Jingliang will be looking for redemption after a quick loss to Khamzat Chimaev late last year.

This is a fight like the one Brown just had — it could be on a pay-per-view and steal the show from a stylistic standpoint.

This would be a real test for Brown. We all know who Chiesa is. He’s game. He’s going to test you. He’s going to try to take you. to deep waters. He’s a veteran and he’s no stranger to ranked fights.

Chiesa is on a two-fight skid. He’s in that spot where he needs to defend his rank. This isn’t as “fun” of a stylistic matchup for Brown, but it would tell us a lot about him and give him an opportunity to crack the top 10.