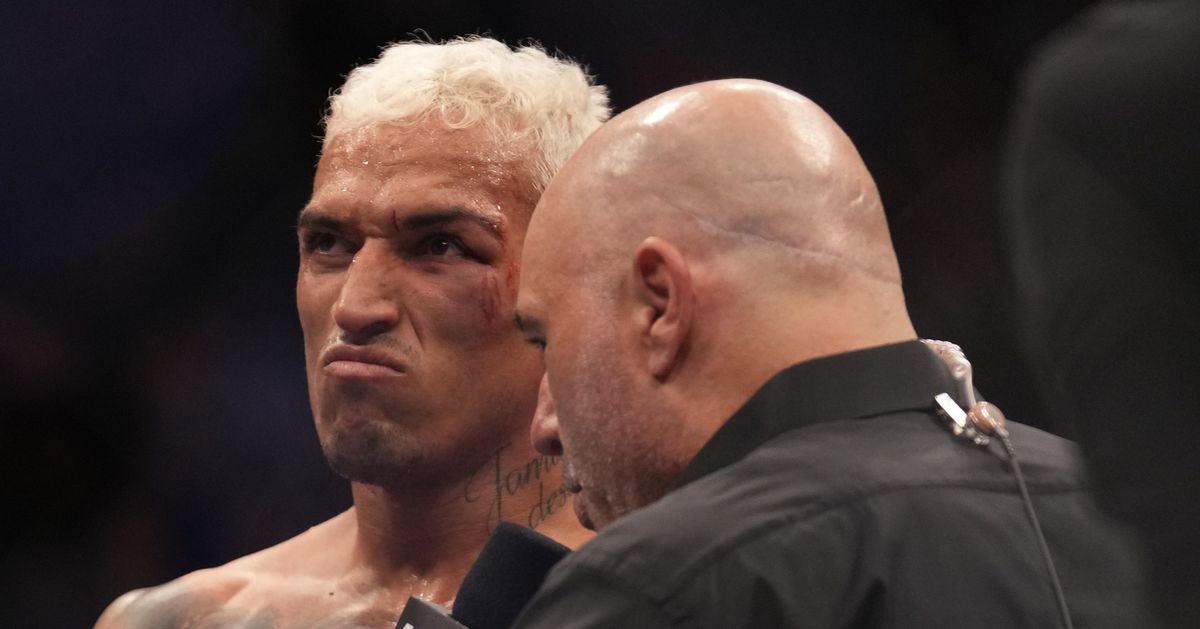 Charles Oliveira was stripped of his lightweight title leading up to UFC 274 when he missed weight by half a pound, but that somehow hasn’t affected his swagger one bit.

“Do Bronx” showed up on fight night decked out in a baller red suit, without an apparent care in the world. Then he went into the cage and took the fight to Justin Gaethje, going punch for punch with the legendary power striker and coming out on top. He ended up choking Gaethje out just 3:22 into the first round (watch the highlights here).

Now Oliveira has taken to Twitter where he’s making it clear he’s still the champ, even without the belt. It’s a new level of boasting for a man who hasn’t engaged in a ton of smack talk up to this point, but I guess that’s the era we exist in these days. In a new tweet he declared he’d fight Conor McGregor and Nate Diaz in one night, asking UFC president Dana White what he thought of the idea.

Just for the record, I like to break records and I want to break another one… Fighting twice in same night. I can knock Conor out, and make Dias tap.

What do you think @danawhite?

Unfortunately, that’s an idea for a multiverse dimension where PRIDE bought the UFC and still holds Grand Prix events with the semi-finals and finals in the same night. That kind of fun stuff doesn’t really fly any more … but it did attract the attention of Conor McGregor, who responded with the same level of venom he brought into the third Dustin Poirier fight.

“Shut up you bum and get back to that favela and pay your piece,” McGregor wrote.

A McGregor vs. Oliveira fight would be pretty awesome, but it’s looking increasingly unlikely as Conor continues to pack on pounds of muscle in preparation for a welterweight title run. Immediately after Oliveira beat Gaethje and called out McGregor, “The Notorious” did sound like he might reconsider leaving the lightweight division.

”I’m not sure I wish to cut the weight,” he wrote in a since-deleted tweet. “I am really enjoying being built like a refrigerator. I feel I want to fight at this size just to watch it back lol. But I’d love to fight the Brazilian, 100%! I love Brazil and I’m unbeaten against Brazil. All KO’s. I’ve some thinking to do.”

Sean O’Malley has had a ‘great’ UFC 276 training camp
The Ultimate Fighter 30 results: Hannah Guy vs. Brogan Walker, semifinals set
Jimmie Rivera looking to score a knockout in BKFC debut
Big things are happening in PFL with Bruno Cappelozza and Renan Ferreira
Max Holloway’s final chance to reclaim the division he once owned