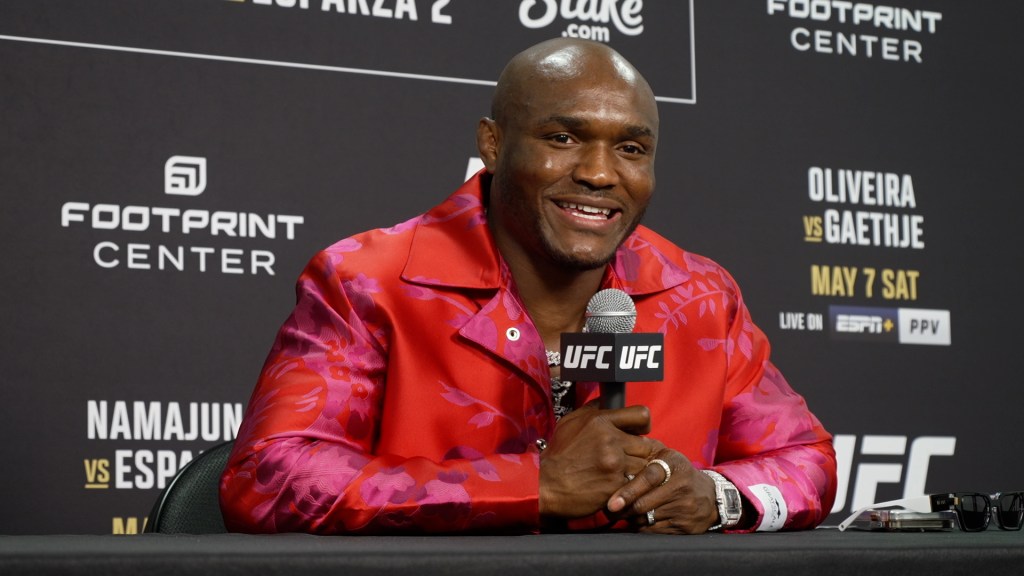 PHOENIX – While many consider Khamzat Chimaev a standout in the UFC welterweight division, champion Kamaru Usman just sees another contender.

Usman (20-1 MMA, 15-0 UFC) refuses to give Chimaev any special placement despite the unbeaten contender’s unique rise and clear stardom in the sport. The 34-year-old definitely gives Chimaev his due respect, but no more or less than he would to any other fighter in his weight class.

“He”a a competitor,” Usman told reporters at UFC 274. “Each and every one of these guys in the division is a competitor. So I take them as competitors, I take them that serious. But as far as putting anything extra on anybody just to try to give them a boost, I don’t really care about that.

“Gilbert Burns was just as tough of a fighter as Colby Covington, just as tough as Jorge Masvidal. I don’t really try to put anything extra on these guys. Of course, I love the extra zeros on the checks if they bring that much eye balls, but at the end of the day, they’re just competitors, and I see no face.”

Usman is coming off his fifth consecutive title defense, defeating Colby Covington for a second time via unanimous decision. The champion recently underwent hand surgery and is in recovery. He expects to fight again before the year ends.

Meanwhile, Chimaev fought last month where he edged former title challenger Gilbert Burns in a Fight or the Year contender at UFC 273. It was Chimaev’s biggest win and most competitive fight of his UFC career.

Usman enjoyed the spectacle between the two contenders but also thought his former teammate proved Chimaev is beatable – something many fans were skeptical of entering UFC 273.

‘It was a good fight,” Usman said. “I think a couple of things here and there on both sides, I think one of those guys would’ve gotten that finish. But that just goes to show that anybody is beatable. Anybody is beatable. Gilbert is a warrior. I’ve known that for a long, long time.”