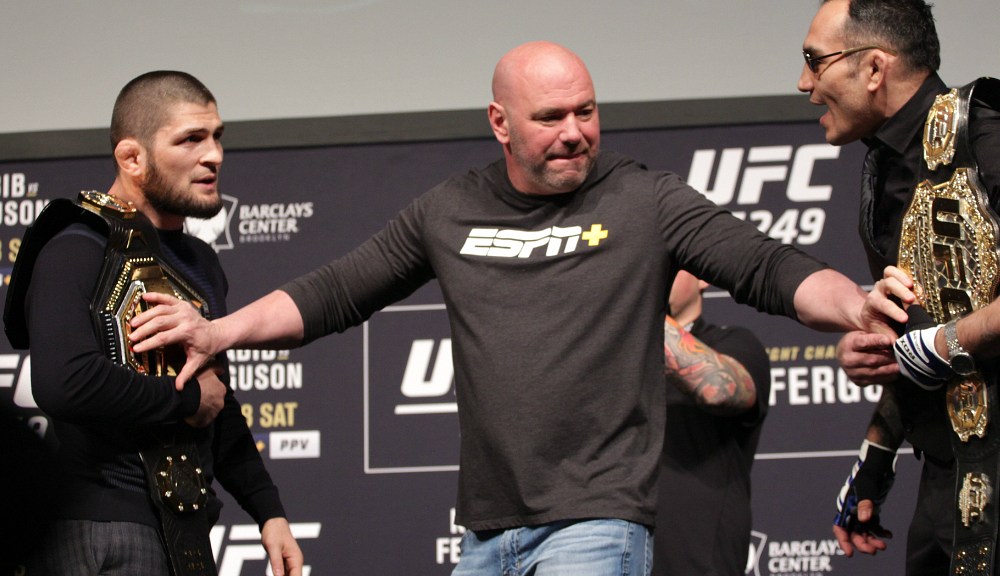 Again and again, Khabib Nurmagomedov shuts down any notion that he will return for a 30th professional MMA fight. Even with Charles Oliveira as (unofficial) champion, that still remains true.

Nurmagomedov has embraced the coaching life since his UFC retirement, mentoring the likes of Islam Makhachev, Usman Nurmagomedov, and Islam Mamedov. While spotlighted opportunities for coaching are usually few and far between, there is an idea out there that gets Nurmagomedov’s competitive juices flowing, especially if it’s against longtime rival Tony Ferguson.

“I like this idea, honestly,” Nurmagomedov told ESPN on Wednesday. “I like this idea. We can do some stuff. Because right now, it’s like, not too many big stars in UFC right now. Myself, I’m finished. Jon Jones is not there. Henry Cejudo is not there. Daniel Cormier is not there. Of course, I don’t like this guy, but he has a big name. Conor is not there. A lot of people are not there. Adesanya, Volkanovski, of course Ngannou, and my brother pound-for-pound king Kamaru Usman. There are only a few people, you know? If me and Tony are going to be ‘The Ultimate Fighter’ coaches, I think they can create some good content, if they’re interested.

“… I don’t want to give him pressure, but Dana, we have to finish two business: Islam Makhachev and ‘The Ultimate Fighter.’ Please call me back, brother. Because if you don’t call me back, I’m going to be in Vegas in June. Then you’ll have to send me a message with your location. Be careful, Dana. We have to finish our business. Call me back.”

As for Ferguson, he’s made it clear he’s interested, as well. He actually first pitched the idea during an interview Monday on “The MMA Hour.”

Widely regarded as one of the most sought-after matchups in MMA history that never happened, Nurmagomedov vs. Ferguson was scheduled on five different occasions – each time, the bout was canceled. While Ferguson is still an active fighter, Nurmagomedov retired in September 2020. Ferguson has continued to call out Nurmagomedov post-retirement for a sixth attempt at the bout, though Nurmagomedov has not taken the bait.