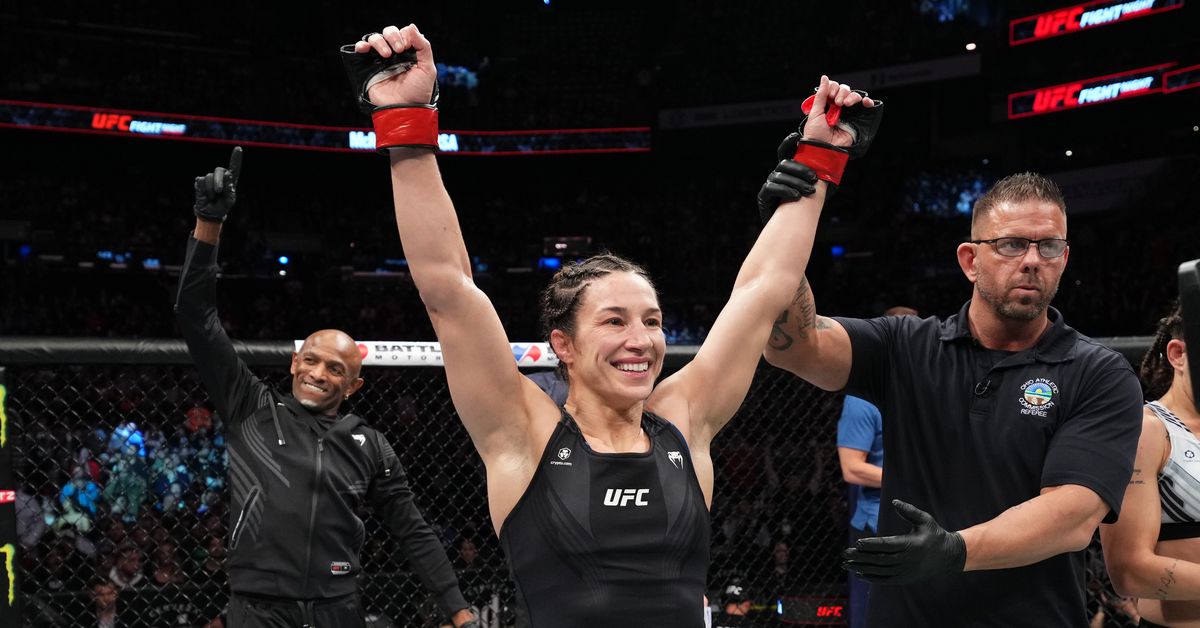 UFC fights come together fast these days, and if you blink, you can easily miss them. In Fight Roundup, we bring you the latest reported matchups to keep you up to date with what’s on the horizon.

All bouts featured have been confirmed with MMA Fighting’s Guilherme Cruz, Mike Heck, and Damon Martin via sources with knowledge of the matchups.

In a battle of bantamweights holding down spots in MMA Fighting’s Global Rankings, No. 8 Sara McMann (13-6) fights No. 15 Aspen Ladd (9-3) at an upcoming Aug. 13 UFC event with a location still to be determined.

McMann, a one-time UFC title challenger, kept her top-10 spot with a unanimous decision win over Karol Rosa at UFC Columbus this past March. Rosa had defeated her first four opponents inside the octagon before that loss.

This fight is Ladd’s opportunity to climb back up the rankings as she is currently in a 1-3 slump, with losses to Raquel Pennington, Norma Dumont and Germaine de Randamie. The 27-year-old’s career progress has been further slowed by a 2020 knee injury as well as difficulties with making weight at 135 pounds.

The bout was first reported by All Access MMA.

One of the UFC’s best grapplers is about to face one of its most dangerous strikers as Gerald Meerschaert (34-15) will soon fight Bruno “Blindado” Silva (22-7) on Aug. 13.

Meerschaert is the owner of 26 career submission wins, while 19 of Silva’s 22 victories have come by way of knockout. Both fighters are coming off of the wrong end of unanimous decisions, with Meerschaert losing to Krzysztof Jotko at UFC Vegas 53 and Silva losing to Alex Pereira at UFC Vegas 50.

The bout was first reported by Ag. Fight.

Billy Quarantillo (16-4) and Bill Algeo (15-6) are set for a featherweight matchup that will take place at a July 16 UFC event with a location still to be determined. This bouts pits two exciting fighter’s in the deep 145-pound division against one another, with both having previously earned “Fight of the Night” honors.

Quarantillo’s UFC record sits at 4-2 after sandwiching a win over Gabriel Benitez with losses to Shane Burgos and Gavin Tucker in his past three outings, while Algeo has fought to a decision in all four of his UFC fights so far with wins over Joanderson Brito and Spike Carlyle.

The bout was first reported by Sherdog.com.

Jake Matthews and Andre Fialho are headed to Singapore.

The welterweights are expected to clash at UFC 275, which takes place at Singapore Indoor Stadium on June 11. Full Violence was first to report the bout.

This will be Matthews’ first fight since March of last year, when he lost by third-round submission to Sean Brady at UFC 259. The loss snapped a three-fight winning streak for Matthews.

Fialho, a recent PFL competitor, has been a man on a mission since stepping in on short notice to fight Michel Pereira at UFC 270 in January. While he lost a decision to Pereira, he’s rebounded with back-to-back first-round knockouts of Cameron VanCamp and Miguel Baeza. Those two wins took place within a span of three weeks, and Fialho has declared that he wants to break the record for most UFC appearances in a year, which is currently five (a record shared by fighters Donald Cerrone, Kevin Holland, Uriah Hall, Thiago Santos and Chris Leben).

Tafon Nchukwi and Carlos Ulberg are getting a shot to build some momentum in the light heavyweight division. The two have been booked to fight at a June 25 UFC event, with a location still to be determined.

This will be a matchup of two Contender Series signings who both appeared on season four of the prospect-finding program. Nchukwi (6-2) has alternated wins and losses since his debut, most recently losing by third-round knockout to Azamat Murzakanov at UFC Vegas 50 in March.

Ulberg (4-1) is a highly touted New Zealand native competing out of the country’s famed City Kickboxing gym. He lost by knockout to Kennedy Nzechukwu at UFC 259, but scored his first UFC victory with a unanimous decision win over Fabio Cherant this past February.

The bout was first reported by MMA Junkie.

Middleweight Sam Alvey will get another chance to snap his long-running UFC skid when he meets Michal Oleksiejczuk at an event scheduled for Aug. 6 at a city and venue to be determined.

Alvey has lost a staggering seven straight fights, going winless since a June 2018 split call over Gian Villante. To add to his woe, he’s seen eight opponents scratched and has been held to one fight this year. Despite his career trajectory, UFC President Dana White has held off on declaring an end to his octagon run and allowed him to complete his current contract with the promotion. In his previous performance, he was submitted by Brendan Allen at UFC Vegas 47.

Oleksiejczuk is two months removed from his third octagon loss, a decision setback against Dustin Jacoby at UFC 272 that snapped a two-fight winning streak earned in bouts against Modestas Bukauskas and Shamil Gamzatov.

UFC’s White jabs back after Diaz vents over deal
Israel Adesanya in Studio: Star Gets Deep on UFC 271, Francis Ngannou, More – MMA Fighting
UFC Rankings Review: Josh Emmett Takes Calvin Kattar’s No. 4 Ranking – Should Emmett Be Ranked Higher?
Cody Stamann says he knew he would blitz through Eddie Wineland at UFC on ESPN 37
How To Watch ‘Tsarukyan Vs. Gamrot’ Tonight On ESPN!