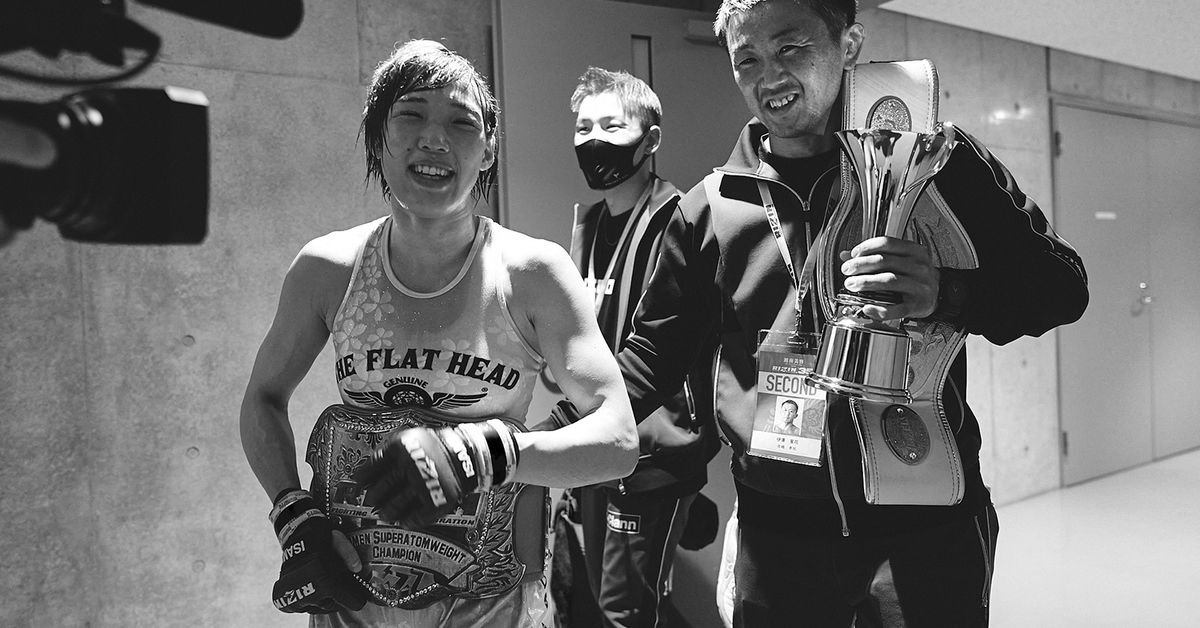 When mixed martial arts (MMA) fans think about the quickest rises to superstardom and title contention in the sport’s history, names like former Ultimate Fighting Championship (UFC) champions and all-time greats, Jon Jones and B.J. Penn are perhaps the two that will come immediately to mind.

In 2022, a judo and wrestling-based 24-year-old phenom by the name of Seika Izawa has replicated similar — if not better — early successes at record speeds.

This past month (Sun., Apr. 17, 2022) at RIZIN 35, Izawa was officially crowned as the RIZIN Super Atomweight champion by earning a second consecutive victory over the division’s consensus best and all-time best, Ayaka Hamasaki. The victory made Izawa a dual-division — and dual-promotion — titlist as she also holds the Deep Jewels Strawweight belt.

Originally, the Utsunomiya, Japan native scored her colossal upset over Hamasaki at RIZIN 33 on New Year’s Eve 2021 by scoring a stunning second-round technical knockout. The loss marked only Hamasaki’s second below 115-pounds and her first time being stopped at Atomweight. In the span of the 13-year 11-time titleholder’s career, she’d never lost back-to-back bouts in 28 outings.

Izawa (4-0) went into the initial non-title encounter in Dec. 2021 with only one fight at Atomweight on her resume and had only been competing professionally for as short as 14 months. To make matters even crazier, the only reason “Starflower” turned to MMA in the first place was because the COVID-19 pandemic shut down judo competitions.

“Right now I feel that I fought Hamasaki twice, I fought the same opponent twice, and I beat her twice,” Izawa said. “And that is what the result is and that’s all I feel. That’s a fact and all I feel is that it doesn’t really feel like a big accomplishment. It’s just a result and a fact.

While fighters like Jones and ONE Championship 115-pound champion Angela Lee hold records for claiming titles at the quicker ages of 23 and 19, Izawa’s level of inexperience compared to the legend she overcame in such a short period is just something unprecedented.

Despite being the now-best Atomweight on the planet, there is still a myriad of options for Izawa in her very young career. Whether those are up in weight or at where she’s most recently shined her brightest.

“Not too much has changed for me, there hasn’t been too big of a difference,” Izawa said of officially becoming champion. “But I’m happy to see people around me get excited to see both belts. I do feel the amount of support that I’m getting has definitely increased since that win.

“I’m still at a point where I haven’t really figured out which weight division I’m best at so as of right now I think it’s okay for me to jump around between weight classes and just feel out the waters,” she concluded. “I don’t mind fighting in both divisions at the moment.”

Riding high off of six victories to start her career and a second solid showing against an all-time great to earn a unanimous decision, Izawa now hopes to take out all comers in the division, ideally in the form of a Grand Prix tournament. An eventual goal for the champion also includes fighting internationally by someday making her way to UFC and displaying her talents. In the meantime, she’s also open to fighting in promotions like Invicta Fighting Championship if the possibility arises and makes sense.

Regardless of what comes next, Izawa has already left a quick mark in the MMA history books. Even though she won again in a very strong fashion against Hamasaki, the mentality Izawa possesses at present won’t allow her to settle and smell the roses.

“I gave up a takedown and I was very tired at the time,” Izawa said as she explained her reasoning for being so emotional after the title win. “I should have moved and scrambled to get back up, I kind of quit and fought defensively because I was so tired and I couldn’t forgive myself for that. I was so disappointed by the fact I stopped moving and I quit being offensive. I was so disappointed in my performance in the third round and that’s why I got so emotional. I couldn’t forgive myself for being so inactive and defensive.”

Watch the full episode of BROADENED HORIZIN Ep. 15 in the video embedded above or you can listen on Spotify.