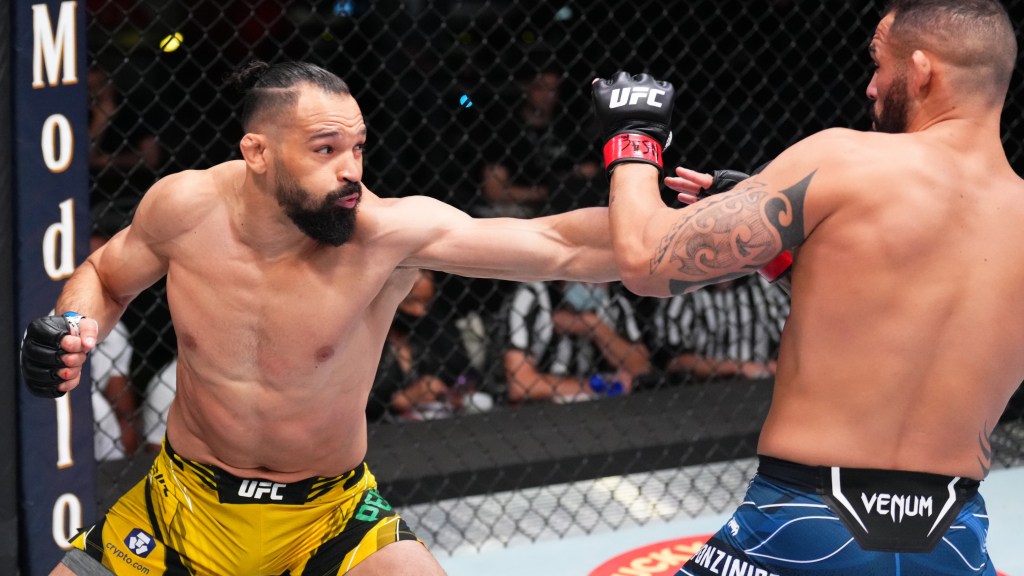 With another action-packed month of MMA in the books, MMA Junkie looks at the best fights from May 2022: Here are the five nominees, listed in chronological order, and winner of MMA Junkie’s Fight of the Month award for May.

After Schnell connected with a heavy punch that led to a knockdown in the opening moments of the flyweight fight, Royval kept his composure and scrambled his way into a brilliant guillotine choke that forced the tap.

After missing weight prior to the event, Oliveira scored a first-round submission victory over Gaethje. The pair slugged it out on the feet, then after “Do Bronx” scored a knockdown, he pounced on a rear-naked choke to complete the job.

Davey Grant (12-6 MMA, 5-5 UFC) has made a habit of putting on exciting performances of late, and he didn’t disappoint in his bantamweight bout against Louis Smolka (17-9 MMA, 8-9 UFC).

Grant took out Smolka with what wound up being a vicious knockout 49 seconds into the third round. Grant had been hurting Smolka with leg kicks, and another one had his Hawaiian opponent limping, then slumping to the canvas.

Katlyn Chookagian (18-4 MMA, 11-4 UFC) proved she’s still the biggest hurdle for anyone who wants a women’s flyweight title shot when she defeated Amanda Ribas (11-3 MMA, 5-2 UFC) in an entertaining affair.

It was a razor-close fight, but Chookagian proved to have the more effective striking over three rounds, and it likely made the difference in a split decision win over Ribas that received Fight of the Night honors.

Michel Pereira (28-11 MMA, 6-2 UFC) and Santiago Ponzinibbio (28-6 MMA, 10-5 UFC) promised to be an exciting fight on paper, and the South American welterweights delivered.

Not only did the fight get better in each round, the final round turned into an all-out braw. When it was all said and done, the judges were split in their decision, but two of the three saw the bout in favor of Pereira.

The winner: Pereira vs. Ponzinibbio

Ponzinibbio looked to do the majority of the pressuring as he walked down Pereira. The Brazilian had success early with some good right hands but nothing that hurt Ponzinibbio. With a minute remaining in the first round, Pereira connected with a solid right hook that seemed to stun Ponzinibbio briefly. The fight continued with both guys looking to close out the round with a statement but were unable to land anything significant.

The second started with a much more different dynamic. Pereira came off the stool hot as he put a lot of pressure on Ponzinibbio. He landed a hard kick to the body that caught the attention of Ponzinibbio. From there, both fighters traded evenly on the feet, but Pereira seemed to land the bigger shots. With two minutes left, Ponzinibbio began to close the gap, landing a few good left hooks and jabs on Pereira. Ponzinibbio would continue to tag Pereira and then close out the round with a takedown.

At the start of Round 3, Pereira landed a hard right on Ponzinibbio, but that was immediately answered by a solid left from Ponzinibbio. Pereira looked to be slowing down, as Ponzinibbio began to bring up the intensity and output with the jab. Both fighters showed clear wear on their face as they traded hard shots. Ponzinibbio began to add leg kicks in his attack and was having success. The round ended with both fighters going toe-to-toe.

After it was all over, the Brazilian was awarded the split decision win on the cards.