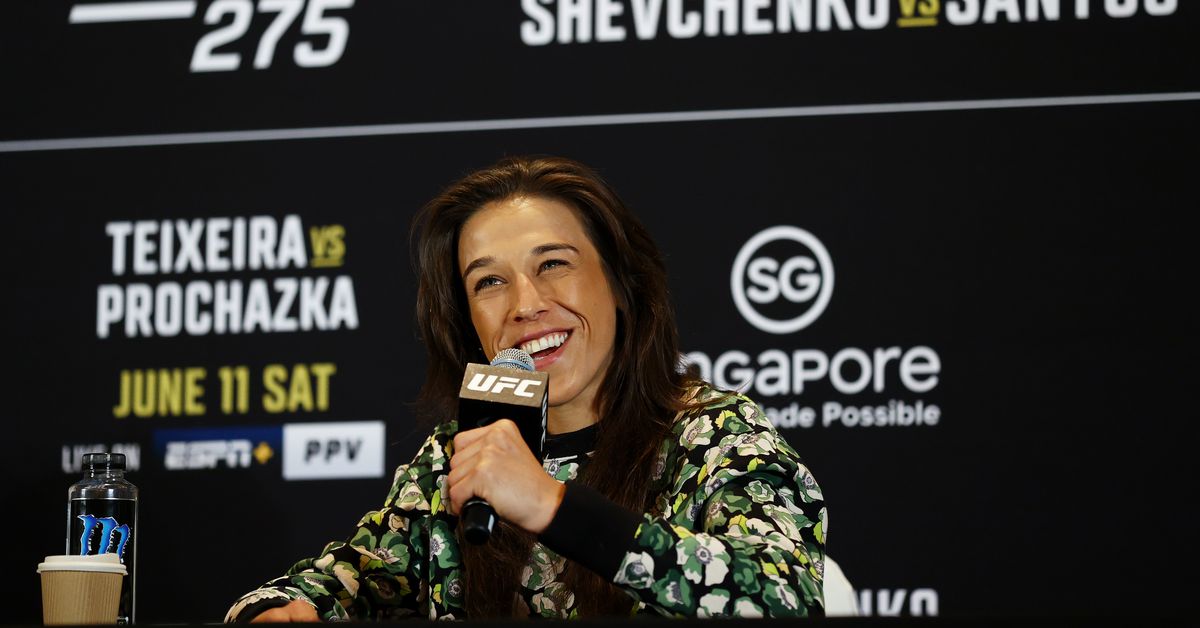 This weekend, Joanna Jedrzejczyk will take on Weili Zhang in a featured bout at UFC 275. It’s a rematch of the 2020 Fight of the Year, and arguably the greatest female MMA bout of all time. As such, the bout is one of the most eagerly anticipated of the summer, and UFC President Dana White added even more intrigue to the fight by announcing this week that the winner would go on to face newly crowned champion Carla Esparza for the strawweight title. But Jedrzejczyk already knew that.

Esparza took the strawweight title from Rose Namajunas at UFC 274 in one of the most maligned fights in UFC history. The fight was so bad that Dana White said he wouldn’t grant Namajunas an immediate rematch, leaving the door open for the winner of Jedrzejczyk and Zhang to step into a title shot. Still, some fans believed Marina Rodriguez might be next in line for Esparza as she is currently on a four fight winning streak and her only professional loss came in a contentious split decision to Esparza back in 2020. But Jedrzejczyk says there are contenders and then there are contenders.

“Big fights only. She’s one of the best,” Jedrzejczyk said of Zhang. “She made it to the league, she was the champ, we made it. So she’s the best. Even after her two losses, she proved that she’s one of the best, one of the toughest in this division. I know there’s lots of talk about other girls, who should get the title shot, but there are girls and then we show up. Me, Weili, Rose, we put on a hell of a fight every time, you know. And this is what this business is about. It’s not about boring fights, it’s not about just fights, it’s about being the best every single time you step in there. That’s the thing.”

Jedrzejczyk has her own history with Esparza, stopping her at UFC 185 to win the strawweight title. Jedrzejczyk went on to defend the title five times before losing it to Namajunas at UFC 217. Over the past few years, Jedrzejczyk has suffered a number of setbacks in her career, and the former champion has not fought since her battle with Zhang at UFC 248, but fully healthy and with a new contract with the UFC, Jedrzejczyk hopes she can get her revenge on Zhang and then go on to reclaim the strawweight title later this year.

“I would love to be back as soon as possible,” Jedrzejczyk said. “It depends how my body is going to feel after the fight, but Madison Square Garden or Fight Island sounds good to me.”

UFC 275 takes place this Saturday at the Singapore Indoor Stadium in Kallang, Singapore.

HOF. Daniel Cormier previews UFC 275, reveals who will induct him into UFC Hall of Fame.

Fear. Tim Kennedy reveals how ‘fear’ killed the MMAAA’s infamous UFC unionization effort: ‘Nobody would do it’.

And money. Oscar De La Hoya explains why Golden Boy MMA only had one show: ‘I received too much heat from Dana White’.

No Bets Barred. Previewing the best bets at UFC 275, including going all-in on Valentina Shevchenko.

Nothing but respect to @Dynamitedan808 it was an honor to share the octagon with you. You are the great example of hard work and heart. I won’t forget what you said to me after the fight ✊

@Dynamitedan808 you suck bro. Couldn’t even beat the rat… From the UFC and myself, we would like to thank you for your career and everything you have done for the company but it’s time to let you go. Let’s see what excuse you’ll make now so I can’t be ther first to finish you.

Thanks for reading! See y’all tomorrow.