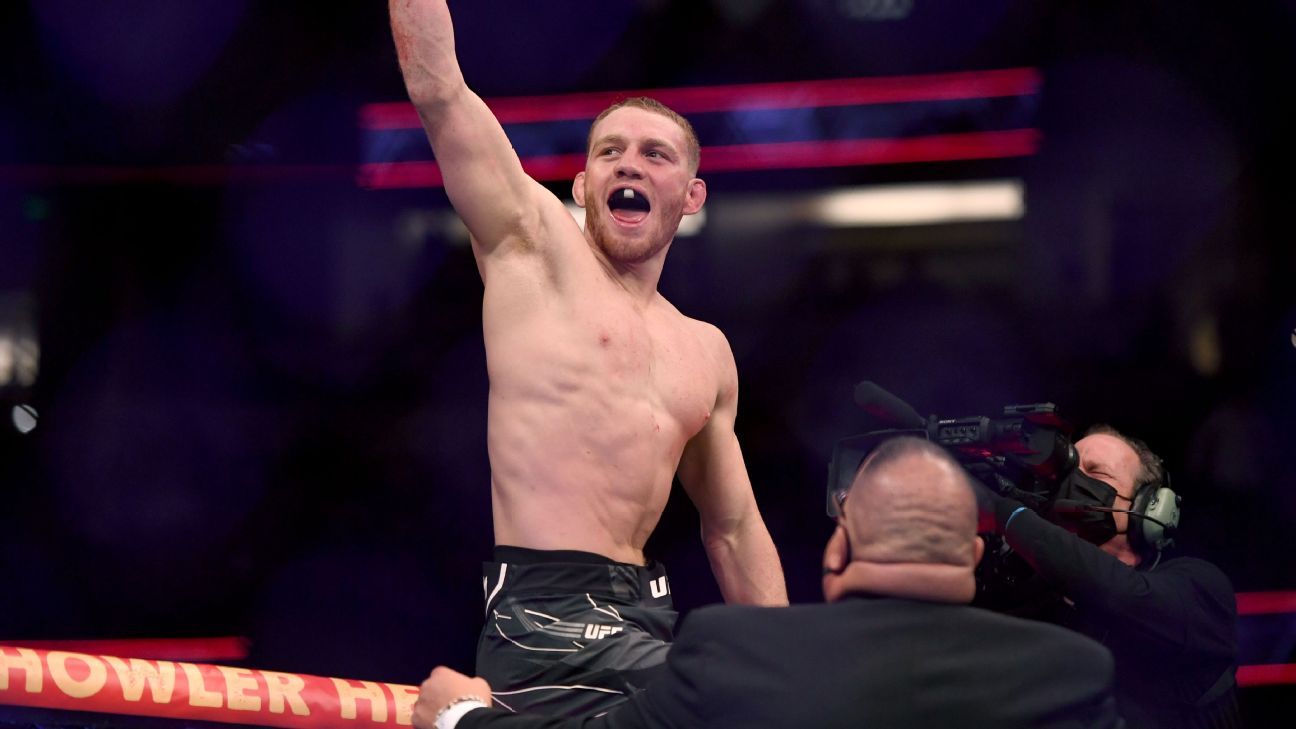 He may only be one fight into his UFC career proper, but Jack Della Maddalena says he is ready to emerge as the next star MMA athlete from Oceania and follow the path being forged by Alexander Volkanovski, Israel Adesanya and Robert Whittaker.

Della Maddalena gets his first taste of a UFC main card this weekend when he faces Ramazan Emeev at UFC 275 in Singapore (Sat. 10 p.m. ET on ESPN+ PPV), the Australian’s return to the Octagon for the first time since his Round 1 victory over Pete Rodriguez in January.

Two titles are on the line at UFC 275. Glover Teixeira defends his light heavyweight championship against fast-rising Jiri Prochazka, and Valentina Shevchenko aims to keep her flyweight dominance going when she faces Taila Santos. Plus, strawweights Zhang Weili and Joanna Jedrzejczyk meet in a rematch of the 2020 fight of the year.

And it was that performance that put the UFC on notice, with commentators Daniel Cormier and Joe Rogan waxing lyrical over the welterweight for whom the victory was an 11th on the trot but first since graduating from Dana White’s Contender Series.

Singapore may have lost the Robert Whittaker-Marvin Vettori fight because of injury, but the city is set to get a look at another Australian fighter whom many believe is destined for big things in the division.

“I feel like I am ready,” Della Maddalena replied when asked whether UFC stardom laid in his future. “I fully believe in myself and I am going to come and give it my best every time. And I train hard, so I’m ready to take on that extra pressure if it is there. To be honest I don’t let that stuff [the hype] worry me…. I put pressure on myself to put on performances, and I think that is the biggest pressure that I face.”

While Oceania is building a quality stable of UFC fighters, Della Maddalena’s opponent in Singapore, Emeev, hails from Dagestan, another region with outstanding MMA pedigree.

And as was the case with the undefeated lightweight great Khabib Nurmagomedov, Emeev’s strength is his wrestling with the 35-year-old boasting seven wins by submission across his 20-5 career record.

“We’ve spent a lot of the last few weeks just around the defensive wrestling stuff, getting back up off the ground if need be, just a lot of hard rounds like that,” Della Maddalena explained of his preparation. “We’ve had different training partners hold me down and then I’ll get up, and then someone else will get on the takedown.

“That’s the sort of training we’ve been doing just to get comfortable wrestling defensively and then to get back to the feet to get the kicks and elbows going again. But I think a lot of it is going to be trying to stay off the center line and to keep the feet moving, to try and sting Ramazan whenever I can.”

At the top of the welterweight division lies champion Kamaru Usman, the Nigerian who remains top of ESPN’s pound-for-pound ratings.

Beneath Usman, though, Della Maddalena sees some movement coming at welterweight. And once he takes care of business in Singapore he has designs on two more fights before the year is out, one of which he hopes will be against a top-15 opponent.

“I would definitely expect to fit one more fight in this year, possibly two fights. Obviously not looking past Ramazan at all, but ideally I would like to fight again and then get a top-15 fight after that, so two fights down I would be knocking on that top 15 door, if that’s a possibility. That’s out of my control but that would be my goal.

With some big goals in mind, Della Maddalena knows what he wants and has a plan to get there, which continues with his strategy this weekend.

“I think it’s just movement, just stick and move, try not to get caught up standing in front of Ramazan too much,” he said. “I think he’s pretty flat footed, he’s a bit of plodder, so I think I’ll move and sting him. And for me, if I look at his face and its damaged and battered and bruised, then I’ll know I’m implementing my game plan correctly.”